As wonderful of a cook as my mom is, I always thought it was a bit funny that she NEVER made mashed potatoes from actual potatoes. It was a big joke in our family that Mom's secret recipe was Hungry Jack. At least it didn't have lumps. As kids, we didn't like the lumps. Maybe that's why she did it...I don't know. She did make potatoes a lot, but in other forms - fried, boiled, baked, in soup - and they were always delicious. One year when my sister had her new boyfriend over for Thanksgiving dinner with our family, my brother - always the funny man - took the box of Hungry Jack (the apple doesn't fall far from the tree) and used a big black marker to write "Pam's secret recipe" on the box revealing to her date that she hadn't really slaved over the big bowl of creamy potatoes.

Now, my mother-in-law is the opposite. I've never known her to make instant mashed potatoes. "There's no nutrition in them!" she told me once when I asked her why she never made them from a box. He daughters followed along and they make theirs from scratch also.

Being raised in the house I was raised in, when I got married, I always made Hungry Jack. But after a few years of eating my mother-in-law's fresh, real potatoes, I didn't want to go back. I do still do the instant for busy weeknights when I have a bunch of kids to feed between homework and cub scouts and guitar lessons or whatever is going on that evening. However, on the weekends or when I have a little more time, I go with my mother-in-law's method. And now that I'm a grown up, I really do like the lumps. And I love it when there's some skin the potatoes, too. I guess mine are more "smashed" than "mashed." They aren't smooth and creamy. They are lumpy.

And as much as I like them plain and simple with a little butter and salt, they are so good when you load them up with other flavors. Here's a pic of the latest batch -- I mashed them and added milk and some butter. Then I stirred in some sour cream and some sprinkles of garlic salt, and topped with shredded cheddar and bacon bits. I usually throw in some chives or at least some fresh parsley for color, but was fresh out of both. Oh, well. It was still good. Really good. 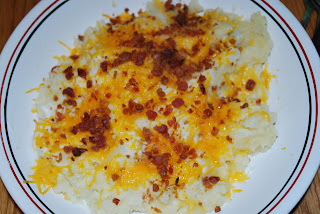