Happy blogiversary to us!!!

So, it was a year ago today that our first blog post went up. Here's what led to our blog, Chicago Foodie Sisters. My sister, Becky, decided to have a little gourmet food party at her house. She bought all the ingredients for some dishes she'd learned to make in some gourmet cooking classes she'd taken. We just showed up and helped with the prep - with her giving us a few pointers and tips - and then we ate. I can't recall the entire menu. I know there were appetizers. We also made a couple salads and homemade dressings. It was the first time I ever had goat cheese. Chicken buerre blanc was the entree. For dessert we made crepes with fresh berries and homemade whipped cream. 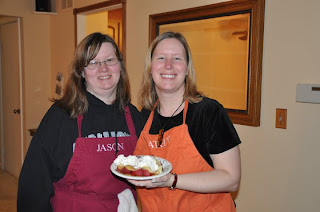 As we ate, we talked about how much we adored food. Becky travels all over the world, sampling foods I've never had. She also loves taking photos and in her albums of faraway lands, she'd often slip photos of exquisite meals in her albums. She's also developed a love of cooking. She's a full time computer programmer working long hours, so doesn't cook gourmet meals every night, but loves to do so when she can. And, of course, she loves eating in great restaurants all around Chicagoland. A couple years ago she was working a contract job in the city for several months. She vowed to try new restaurants every week and take advantage of the culinary perfection that surrounded her.

I've been married for 21 years now, so I've done a lot of cooking - feeding our family of five sons, cooking dishes for parties and just for fun sometimes. We both love to dine out, too. I've been a freelance writer for about 13 years now and have done a bit of food writing for a local paper I'm a correspondent for. I also work part time as a newborn photographer and love taking pics of babies, but also enjoy photographing food.

We decided we'd start a blog to share some of our favorite meals, whether they were cooked at home or served to us in an restaurant. We'd include recipes, photos, share a favorite kitchen gadget (at the time Becky was working a contact job as a programmer for Pampered Chef and we both have tons of their products) or a new cookbook we've checked out or let you know about a fun food festival.

We grew up with a mom who prepared some great meals for us. Most were on the simple side, but were so good, probably because they were cooked with lots of love. :) She has never used much seasoning. Pretty much salt and pepper were the extent of added flavors, but somehow, she always got it just right. I tend to prepare meals in the manner that mom served them -- a meat, a starch and a vegetable to balance out the plate. We often had salad and some type of bread with the meal, as well. Some favorite meals were salmon patties with  macaroni and cheese and spinach; ham with boiled potatoes and green beans; pork roast with stuffing and peas; sirloin patties with mashed potatoes and corn; smoked sausage with butter noodles and candied carrots. And the all time favorite was chicken and dumplings.

Mom was brought up in family that was not too well off. There were six kids. She was born in the mid-30's. Her parents became parents during the Great Depression and raised kids without much. Meals were made with whatever they had. Mom's simple potato soup, which is nothing more than potatoes, water, salt, butter and a little milk was probably a typical meal for her and her siblings. It was one she made for us often and we devoured it. I make it from time to time, but it just doesn't measure up to Mom's.

Mom also became a housewife in era when TV dinners were a revolutionary invention. Box mixes were becoming popular. She took to the short-cut way of cooking, but it never tasted like she'd taken shortcuts. She always made stuffing from a box. Although it was Stove Top, she added chicken broth rather than water. She added diced celery - leaves and all (I swear those celery leaves are the secret ingredient!) She called it "doctoring it up." She'd make a box of mashed potatoes, but add butter, salt and pepper and parsley and you never knew you were eating Hungry Jack. My husband always says she could look in a cabinet with just two or three cans or boxes in it and whip up a great meal.

Both us sisters used mom's way of cooking as our foundation and we've both expanded and added many recipes of our own, even creating recipes of our own. I love it in the winter when there's a Saturday or Sunday and nothing is on the calendar and it's frosty outside and I pull out my pots and just cook soup all day. I love in the summer when our garden is overflowing and my father-in-law brings by crops from his garden and I create salads and side dishes that are as fresh as you can get. I love turning on the oven in the afternoon so that the kids come home from school and have a pan of fresh brownies waiting on them.


So, we both love to eat. To cook. To bake. We just love food. Period. 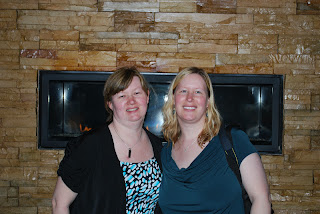 I've had a little time this past week to sit with the latest book I'm reading: My Life in France by Julia Child. The local library has the summer reading program going on and this year the theme is food. How appropriate. So, that was the first food book to come to mind that I hadn't read. I'm really enjoying it. I love her passion and dedication to the tedious details that are necessary for the best results. I can't say I'd go to the extremes she did. I'm a mom of five kids with two part-time jobs. I'm never going to have the time to spend hours and hours on a dish and then repeat it two or three times to get it just right. It sure is making me fall in love with France, though, and Germany and Norway and really all of Europe. I would love to do as she did and head to France to stay for a full six months to work on a cookbook. But I know me. I wouldn't stay put - holed up in the kitchen as she said she did. I'd be out exploring everything. I like to cook. I like to spend time making wholesome dishes for my family, but as much as I enjoy it, there's just so much more to do and see and experience. Music. Art. Sporting events. History. Museums. Landscapes. And food is linked to so many of those things.


The past few months I've been working on my fifth book. Lots of work, but it's so satisfying to see the final result. I have so many ideas for other books that I hope to one day bring to fruition - and I hope to one day add a cookbook to my resume.


The blog started out as a random, occasional thing and we were posting sporadically. After a while I finally learned how to schedule my posts (I don't know why it took me so long to figure that out!) and now I sit and work ahead for several days, enabling me to get something up on the blog every day. I hope you'll continue to follow and stop by our FB page once in a while to let us know what you think or share some foodie wisdom or a recipe of your own!