This summer I've fallen in love. It was an unlikely pair. In my youth, I wasn't really fond of mushrooms. It was more that I tolerated them. I warmed up a little more to them after I married.

Pizza was always ordered with mushrooms because my husband and son liked them. I grew to appreciate them and quit picking them off. When my husband would make a big skillet of eggs and veggies on the weekend, I'd pull out a good portion of the mushrooms and scoot them on to his plate. Keep in mind these were canned mushrooms.

Later, I'd start making dishes with fresh mushrooms for him. And I'd add them to salads. Little by little they grew on me. I started to order portabellas in restaurants and that sealed the deal.

This summer when I visited the local farmer's market, I picked up cremini mushrooms, which I have eaten before, but never purchased before. I actually don't recall ever seeing them in any stores nearby.

I must admit that I've fallen in love with creminis. I love the flavor. I've used them raw in salads, but it's when they are cooked that I'm smitten. All summer long, I have been putting them in foil with a little butter or oil and sometimes some accompanying vegetables. And then I usually top chicken with them or steak or burgers or put them along side the entree as a side dish. 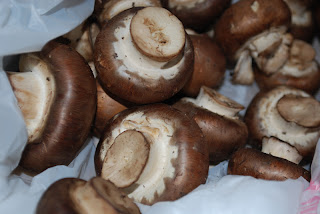 They've produced the most wonderful burgers! And here's a shot of some planked steaks we made that I topped with some cremini mushrooms and grape tomatoes that had been prepared on the grill in a foil packet. I'm head over heels in love. Can you blame me? 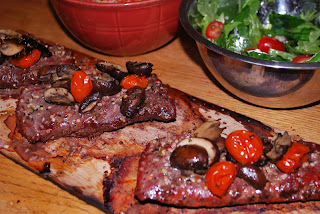