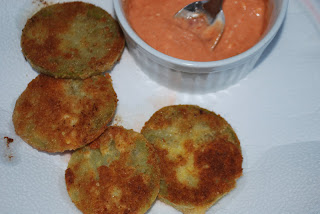 The kids had picked all the rest of the ripe stuff from the garden. I had peppers and bright red tomatoes piled on my counter. But...it seemed a shame to not do something with all those sad little green tomatoes left hanging on the vine. So, I pulled some off and sliced them up and fried them. :)

It had been a long time since I'd made them before - like maybe 10 years or so. I've had them since a few times in restaurants and loved them -- especially at this little place in Kentucky called Big Bubbu Buck's Belly Bustin BBQ Bliss. We were staying at a lovely bed and breakfast nearby called Country Girl at Heart Bed and Breakfast (read more about it here) and as soon as I heard the name of the place, I knew we'd have to stop for a meal. The fried green tomatoes there were AWESOME! 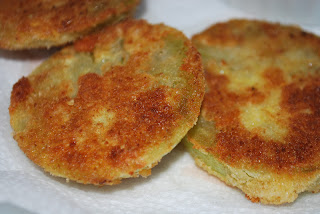 Anyway, so the other day, I wanted to make a batch. I put a posting on the Facebook page asking for recipes. I got advice from several people. One recommended using just flour and salt and pepper. Someone said to fry them in bacon grease. Someone said to dip in cornmeal.

Gail at Good Meal Deals blog shared her recipe, which included milk, cornmeal, flour, eggs and bread crumbs. The photo looked fantastic. My only problem was that I didn't have any corn meal and had no plans to go to a store (I had just returned from grocery shopping.) So, I went with the advice of a guy named Mark Brown, who left a comment that he uses flour, egg wash and cornmeal or bread crumbs and then fries over medium high heat for 3 - 4 minutes per side. He said he's been making them for 45 years, so I figured he knew what he was talking about an he said I could use cornmeal OR breadcrumbs. I had lots of breadcrumbs.

I sliced them and:

Then, I also asked on my Facebook page for sauce ideas. Mark said that in his restaurant, he used a combo of mayo and ketchup, which sounded easy enough. Then he left another comment saying that his dad and grandpa would also add hot sauce to their sauce. Someone named Mary Jo Smith commented that the Hollywood Diner, which was featured on the Travel Channel, serves them with ranch dressing. I ended up going with Michael Rothenhoefer's idea:

I thought the cocktail sauce would give it a little kick. I was right. I didn't like the texture with just the mayo and cocktail sauce. I added some Miracle Whip, too, to smooth it out a bit more. 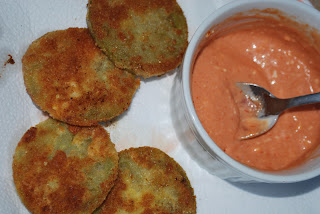 Oh, and if you have no clue what I mean by "Towanda" in the title of this blog posting, then rent the movie "Fried Green Tomatoes" - it's a must see! :)