The way to grill pineapple

One day as I was shopping at my local Strack and Van Til store, I noticed a good price on pineapple. I think they were 2 for $5. It used to be you could request to have them cored and sliced when you purchased them, but I found out that they no longer had the machine that did all that work. When the produce guy told me that, I expressed disappointment. I told him I wanted to grill some pineapple that night with dinner.

He suggested slicing it in half and laying on the grill with the outer skin down and heating it. This way, he said the heat would draw out the juice, but it wouldn't drip out and dry out the fruit. Then slice it once it's off the grill. He was right. It was so much more flavorful this way. I missed the grill marks a little, but gained all that juicy flavor! 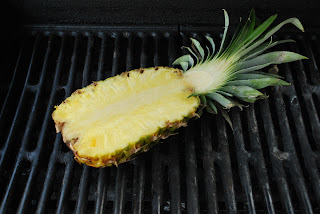