So, I've mentioned on the blog before that I am part of a group of bloggers called the City Moms that will visit local family farms this year and share our experiences. Illinois Farm Families coordinates the visits. A couple months ago we visited a hog farm and last month we all went to the Saathoff Family Farm in Manteno to learn a little about planting season for corn and soybeans. 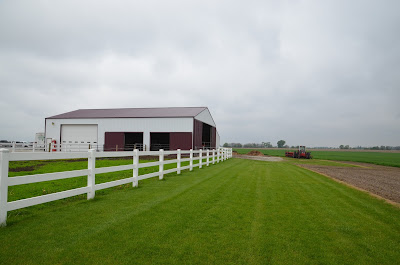 As we have found on many of the farms our family has visited, farming is a long tradition - that also goes for the Saathoff and Meyer families. Three generations were there on the tour. There have been 5 generations that have lived and worked on the farm. 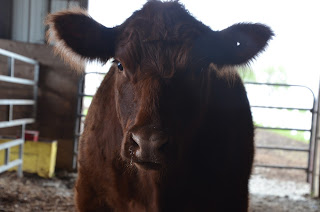 For family farmers on small to medium sized farms, it isn't that easy to rely on it as your primary source of income. Nick is also a seed representative and his wife is a middle school teacher. They cover 1200-acres on their farm of corn, soybean and wheat. Last year the kids also started a little 3/4 acre pumpkin patch and had a successful season simply by leaving a cart of pumpkins near the road with a can to deposit money in, done on the honor system.

Nick's brother-in-law and his family utilize the farm to raise cattle that their kids show at county fairs and then sell at auction. We got a quick rundown on the difference between dairy cows and beef cattle and an explanation of why its more cost effective to ship the cows off to another pasture over the state line for part of the season rather than sacrifice valuable farm land with rich soil during peak months. There were three parts of our tour and the cattle barn was the first portion.

Next we moved outside for part two of the tour where we learned a little about corn production and all the uses for corn besides eating it off of a cob. Much of what they grow is used as livestock feed and some is used for ethanol. I was surprised to also learn that a lot of corn grown in the U.S. is exported. 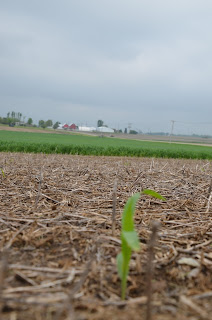 Planting really involves a lot more than putting a seed in the ground. There are so many variables and so much science that goes into so many decisions, like planting locations, timing of planting, crop rotation, soil conditions, etc. Then there's maintaining the fields, harvesting and getting it to the correct moisture level before it goes to market.

The third part of our tour focused on planting and we learned about the GPS programming systems that allow tractors to operate on auto-pilot. Farmers sit inside rigs that steer themselves, which I thought was pretty cool. It was a neat marriage of the ancient art of farming with the benefits of modern technology. Among the benefits of the GPS system are the reduction in human error and a decrease in fatigue in farmers who spend long hours inside the tractors planting row after row.

I was really surprised at how much technology plays into modern farming. On part of our tour we took a look at an iPad with a grid on it that mapped out a farm field, showing how through soil testing and other methods it could be determined if certain spots needed extra attention or if seed placement needed to be modified due to the conditions of that part of a field. 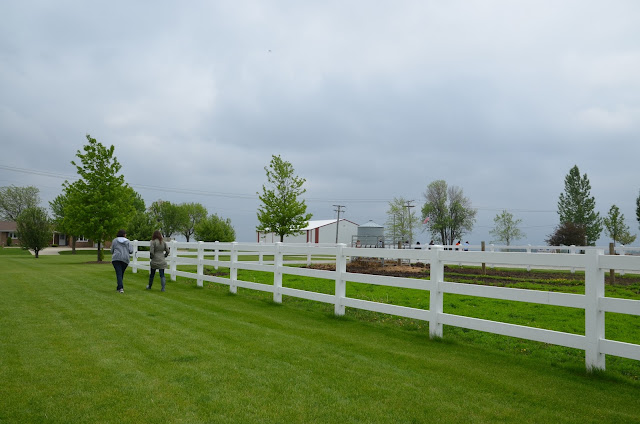 I was also surprised to learn that there are so many specialties within agriculture (one of our speakers after lunch was an agronomist) that I didn't know about and so much research, planning and modification that farming entails. Farming has really evolved in the past century to where it's no longer commonplace for a farmer to raise children who stay on the farm throughout their lives. A majority of the newer generation of farmers are college educated and have left the farm for some time to study in an area of agriculture before returning to work on their family farm or they branch out into agriculture professions.

Our day was another eye opening day of how much work and how many resources go into the food that we put on our tables. It furthered my sense of appreciation of the work that farmers do.