I first heard about Skillets in Highland earlier this year. I'm someone who could eat breakfast for any meal of the day and love a hearty meal with eggs and meat and toast. I'd been wanting to get over there to try it out. So, now that the kids are all back in school, hubby have had free time a couple mornings a week to run our errands and have a little daytime date on his days off. So, I finally put Skillets on the itinerary and got over there.

I looked over the menu for a few minutes, but how can you go to a place called "Skillets" and not order a skillet? :) That's been a frequent choice for breakfast over the past year. I love Hobo Skillets or meaty ones - with lots of veggies, potatoes and big chunks of sausage, ham, bacon or all three.

Hubby selected a Southwest Skillet with chicken breast, chorizo, onions, red and green peppers, potatoes, cheddar cheese topped with eggs and an order of pancakes. He was pleased. 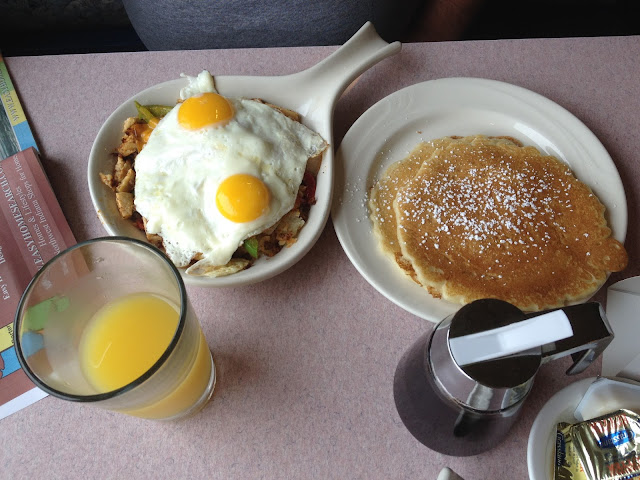 I prefer my breakfast on the milder side and went with the Hobo Skillet with two eggs (scrambled), ham, bacon, sausage, tomatoes, and sauteed veggies with cheese and hash browns topped with sausage gravy. Very yummy! I opted for a side of whole wheat toast with mine. 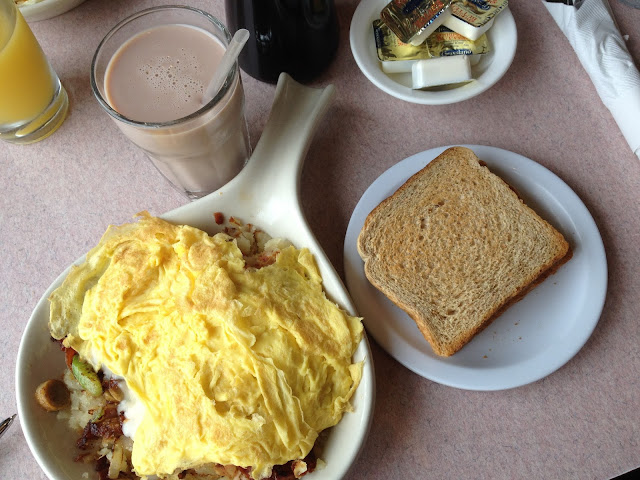 They've got all the breakfast classics - pancakes, waffles, crepes, omelets, French toast, breakfast sandwiches, as well as a nice selection of lunch entrees and sandwiches.