Still Time To Get Tickets To Valpo Beer Rally 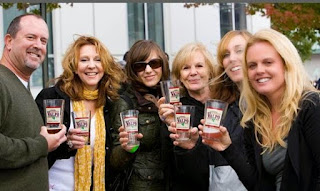 For beer fans who love to enjoy their brew at fun outdoor fests among other beer enthusiasts, we are moving into that time of year of sampling galore. Any good craft beer fan knows about the big ones - like Valpo Brewfest that draw huge crowds of thousands where tickets sell out sometimes in mere minutes.

Another fun fest that grew out of the Valpo Brewfest is a smaller scale one focusing on Valpo brewers - Valpo Beer Rally. Last year was the inaugural event, which I attended at Valpo's Butterfield Pavilion. I really liked the smaller venue and more laid back atmosphere. With it being on a spring evening, it felt like part cocktail party, part neighborhood fest, part beer centric gathering. It had a smaller crowd and just a few breweries. I liked that I could leisurely try just about every sample - no pressure to rush to hit as many booths as I could in a short timeframe and smaller crowds meant smaller lines. The 2nd Annual Valpo Beer Rally takes place this Saturday, April 23 from 5 - 8 p.m.

Only 400 tickets are sold for this indoor/outdoor event. Outside you'll find food trucks serving up tasty cuisine that pairs well with the beers - pizzas, sandwiches, fries were among offerings last year.
There will also be musical entertainment and a new game area. This year the event features three Valpo breweries and two guest breweries. Check the Facebook page for updates on what beers will be available and what food vendors will be on hand.

General Admission is $40 and designated driver is $15 (plus a nominal online processing fee.) To order tickets, click here.