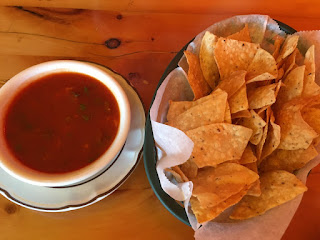 I was picking my son up from a rehearsal in Munster, Indiana earlier this week and when he got in the car hungry and thirsty, he mentioned Mexican food. So, I ran down the list of Mexican places we would pass on the way home (three) and a couple more not far out of the way (two more.) As we were driving and trying to figure out which one to go to, I noticed that I was approaching a Mexican place I'd never been to. I saw an ad in a mailer recently and had made a mental note to try it out. Well, I missed it when scrolling through my mental notebook. :) But as I saw it coming up, I quickly made a turn and pulled in the parking lot so we could try it out.

I noticed on the menu that it said "Don Andres #3" so I wondered where the #1 and #2 are. I looked online and there seems to be one in Hobart (#2) and one in Hammond. 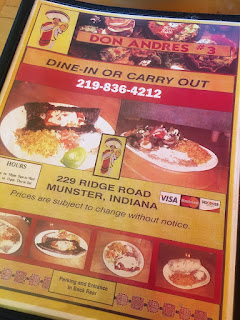 I expected it to be a place to place a quick order at the counter and seat yourself, but we were welcomed with chips and salsa when we sat and the friendly waitress took our order after I scanned the menu for a few minutes. 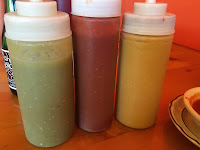 My son ordered a steak and pork enchilada dinner with rice and beans. I ordered a chicken taco and asked them to add avocado. They brought out the trio of sauces while our meal was prepared. That yellow one down there on the right looked innocent enough, but when I asked what it was, I was told it was the "extra hot," so I am glad I didn't give it a try. I'm a mild girl most of the time. 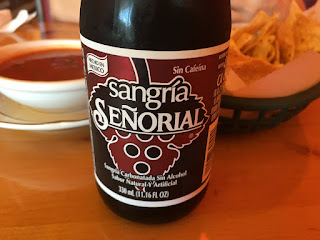 Also as we were waiting, my 12-year-old son took a peek in the cooler. I made sangria for a barbecue we had at our house recently and he was asking if he could have some of the sangria. I told him no - that it was an adult beverage. He insisted that it wasn't and ever since then he's been asking me to buy him sangria. In my experience, sangria is an alcoholic drink, so I was wondering why he kept asking for it. I finally figured out where the misunderstanding was. Apparently he'd been on a field trip for summer school at the U of I where they stopped for some food and he got a bottle of sangria - a non-alcoholic version that is basically some really good sparkling grape juice. So, he was really happy to see that they had his sangria there and he got a bottle. And I finally figured out why he kept asking for sangria. 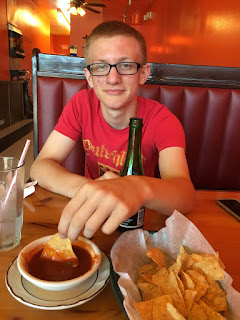 We had a nice meal. Sadly, I have five boys, but I have a hard time getting them to accompany mom to lunch anymore. I remember being that age and not being very thrilled about hanging out with my parents, so I don't take it personally. But of all the boys, he's still pretty good natured about it. If I put on my pouty face and say pretty please, I can usually rope him into a lunch date. And he's the most adventurous eater, so he really does like to go to new restaurants and try out the foods. And he's so easy...I can order anything and he'll give it a try or agree to split it with me.

His enchiladas were very, very good. I was glad I tried them. I've been craving them since then and plan to return soon for that very meal. My taco was piled high. Really high. I had to eat some of it off the top first because it was so big that I couldn't fold it. It was also way above average on the taco scale. The meat was tender and it was very generous in terms of meat and ingredients. I was tempted to order another plain tortilla and dissect it just to make it easier to eat. There were enough toppings for two - maybe even three tacos.

Since I drive past this place so often, I know it will be one that I will visit again. I look forward to a repeat of this meal, but also to trying some of the other menu items. 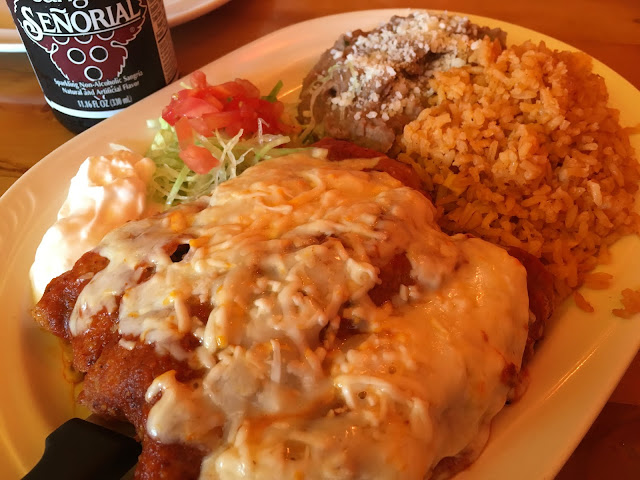 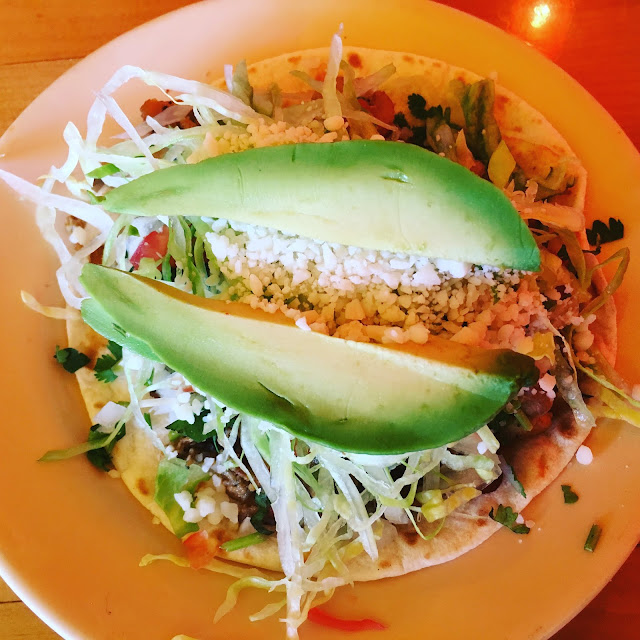