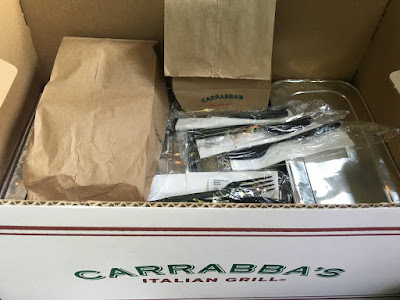 I got a recent invite from the folks at Carrabba's to try out the new family bundles.  The family bundles are full meals to feed four that can be pre-ordered and picked up for curbside pick-up, making it an uber convenient option for busy parents.

The family bundles can be ordered online or phoned in. There are six entree options, all of which come with salad and breadsticks, with prices ranging from $34.99 to $44.99.

So, I picked a weeknight when things were busy and I didn't want to turn on the oven with the air conditioning on and I placed my order. Among the choices were spaghetti, lasagna, cavatapi alfredo, cavatapi carrabba, chicken parmesan and chicken marsala. I was pretty hungry, so I decided to go with a chicken dish. I love chicken marsala, but I figured the chicken parmesan would appeal more to the kids.

I called in my order, which took just a couple minutes. Since it's pretty new the girl who answered the phone put me on hold because she wasn't sure about how to take the order. But, less than thirty seconds and she was back on the line. She asked for my choice of entree, then choice of side. It was nice that I had an option of pasta, potatoes or a seasonal veggie. I opted for the garlic mashed potatoes. I also had some different options on the salad and selected a caesar salad. The dinner also came with bread with olive oil, fresh herbs and grated parmesan as well as dressing. They included napkins and plasticware. All I had to do when I got home was pull out some plates and pour some drinks.

You'll have to excuse the lack of photos, but I was hangry. :) I missed the curbside pick-up lane outside the Schererville, IN location and pulled into a spot. Literally before I had the car in park, someone was at my window. The meal came in a sturdy box with handles, which she slid into my back seat for me and I was on my way. It was twenty minutes from the time I called it in to when I was pulling out of the parking lot with my dinner. 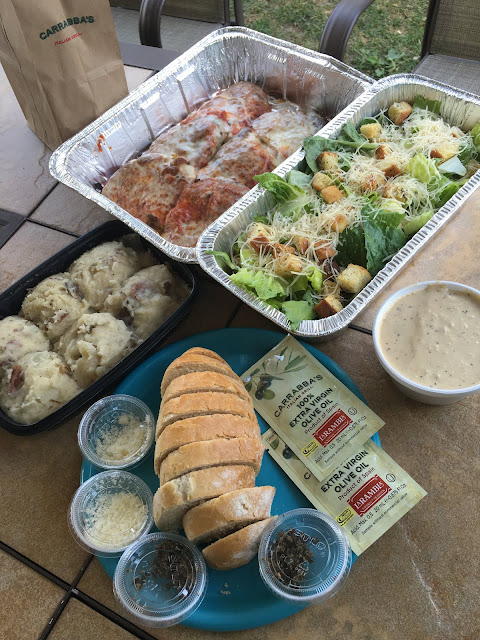 I'd only visited a Carrabba's location once before when my sister and I visited the Woodridge location for soup and salad for lunch. So, I hadn't had an entree from a Carrabba's before. It was a mild-summer evening and we decided to have dinner on the patio. For a carry-out meal, this exceeded expectations. The chicken parmesan had a light breading that was crunchy, not soggy, with just the right amount of sauce and cheese. It held up well for the 20-ish minute ride home. Everything, including the bread was still warm. Although the meals are advertised as "perfectly portioned for four," the chicken parmesan had six portions, so it could easily feed six. There were actually five of us at home that night - two adults and three kids. The portions were generous and two of the kids cut one in half and split it. So, after all of us were done, we still had two full cutlets left. We also still had half the potatoes left. And half the salad. And see the bread in the picture? We got three loaves that size. The kids may not have had the biggest appetites that night, but even if they'd taken heartier helpings, we still would have had leftovers for sure. It feeds four - and then some.

Other notes: The salad dressing was fantastic. Everything was in nice disposable containers that we just put lids on to put in the fridge when we were done. Clean-up was a breeze. The EVOO, parmesan cheese and fresh herbs were a lovely addition to the bread that you might not expect to get with take-out. And, if you want to order lasagna, it does require a four-hour advance window.

At first I was a bit skeptical about spending $44.99 on a take-out meal (after all, if you're feeding four, that's $11-plus per person before tax) but this was way higher quality than a bucket of chicken or a pizza from a chain and with the generous portions, you're sure to have enough to at least feed someone (or two or three) lunch the following day. I would definitely place an order again - especially in the fall on a stressful day of getting out of work knowing I'll have to run a couple of kids to after-school activities before an evening meeting with little time to make dinner. It's also classy enough that if you're having company, you can place an order, pull out real dishes, transfer your meal to some chic serving platters and pour a glass of wine to enjoy an evening with adult company.

Are you following us on social media? Be sure to like Chicago Foodie Sisters on FB and follow on Instagram and Twitter (Twitter handle is @carrieste) for a chance to win Carrabba's Pranza (gift card) to use toward the purchase of your own family bundle.

***I was provided with a complimentary meal for the purpose of a review. I was not compensated for this post. All opinions are my own.