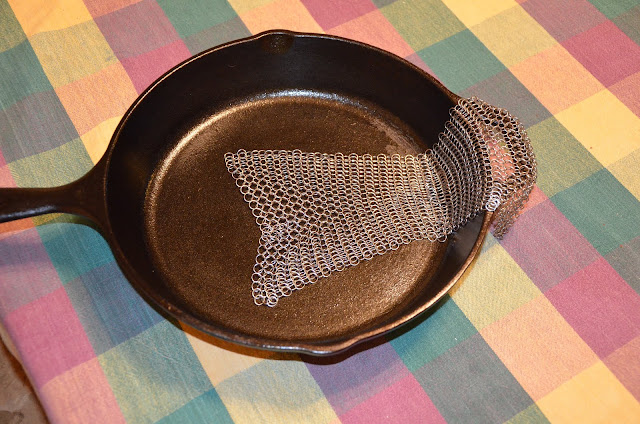 I have fuzzy memories of making scrambled eggs in a cast iron pan as a kid and then it being a nightmare to wash by hand. I was about 10. I had no idea how to care for cast iron. I didn't know it had to be seasoned. Or that it needed a little oil rubbed on it before the eggs went in to prevent sticking. Or that you weren't supposed to use soap when you cleaned it.  And I'm pretty sure I used a Brillo pad on it - a big no-no. Yup, I really did a number on my mom's pan.

Now many years later, thanks to hubby's love of cast iron, I'm back to using it again - with a little better handle on how to use it and care for it. It can still get some stubborn stuff stuck on the bottom when cooking and then it's a little tricky to get it off. Usually some hot water does the trick, but when it doesn't I'm still wary of doing damage. So, I was excited to get an email with an offer to try out "The Ringer." It's a premium non-rusting stainless steel scrubber specifically for cast iron that is "tough on grit, gentle on seasoning."

The Ringer is made from machine soldered chainmail and is uber strong (the material was originally designed to help protect police from stab wounds.) The patented design makes it easier and quicker to clean cast iron with nothing more than hot water and because of its durable patented design, it should last a very long time.

I tried it out recently after I'd made some taco meat that got left on the high heat a little too long. The Ringer cleaned it out easily. I have always dreaded having to clean a dirty cast iron pan. For a long time it even prevented me from using cast iron. I love that I don't have to worry about stuck-on food anymore because all I need to do is a few passes with the Ringer and I'm done.

One other nice thing about this product is that you don't have to fear spreading bacteria as can happen with sponges. You can also throw it in the dishwasher to clean it.

The Ringer retails for $15 and can be ordered on Amazon.

***I did receive a complimentary product sample for the purpose of a review. I was not compensated for this post. All opinions are my own.