So, anyone who knows me...and even if you don’t know me, but follow along on social media, will know that I am a huge die-hard Cubs fan. But I’m not a hater. I can still appreciate the game of baseball as the beloved pastime of our country. I still just love the history and tradition of it. And I really enjoy taking in a game - whether it’s at a major league ballpark or a minor league or independent team’s home field or a little league or high school game. It’s just something I love. And just because I love it best when I’m at the Friendly Confines doesn’t mean I can’t enjoy it elsewhere.
Since I live in the south suburbs, a visit to Comiskey Park (yes, I still call it that) is so much more convenient. Parking is much easier. The place is more roomy. More modern. It’s more kid-friendly. Plus they have fireworks! And I have to admit - it has a lot of nice amenities that are missing from the Friendly Confines and has better food options. 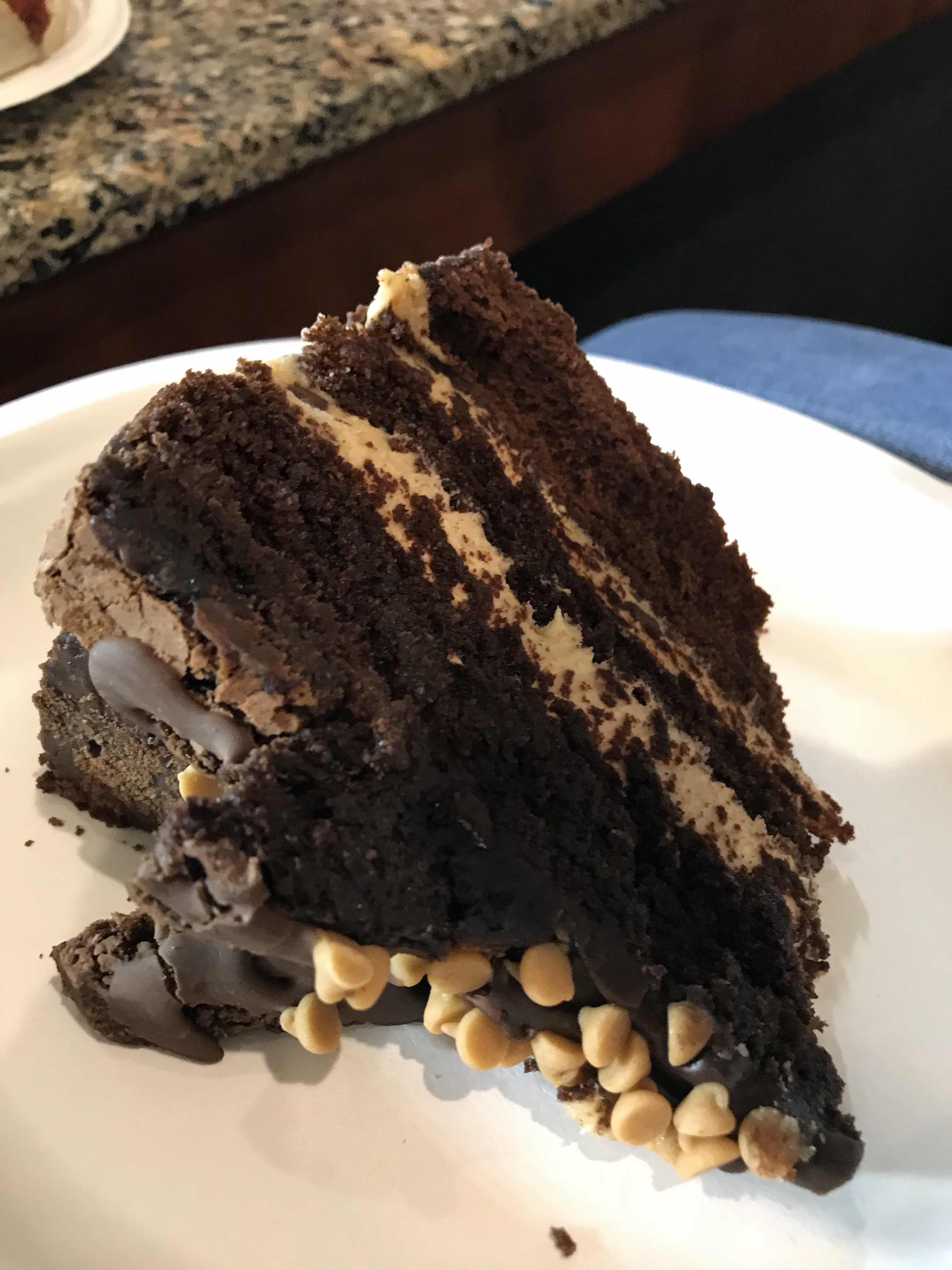 Most years I make it to at least one Sox game. It is usually when I happen to get some free tickets, but even if I’m footing the bill, the ticket prices are uber affordable. Last year I went with two of my boys and a friend of theirs and it was for one of their Family Sunday promotions and tickets were just $10.
Anyway, tonight I had the pleasure of taking in the game from a suite with my fellow brand ambassadors from WGN Radio. The ambassodor program launched recently and I’m one of 6 that will be doing social shares on some of the radio programming and their events and giving feedback to producers at the station throughout the year. Because WGN 720 AM began broadcasting the White Sox games this year, we were invited to a game in their suite. It was a chilly night so it was wonderful to be able to watch from a cozy room that was loaded with goodies.
Being the foodie I am, I had to snap some pics of the offerings. There was a little nacho bar and some plump Chicago dogs and popcorn on the traditional side of ballpark food. But we also enjoyed chicken wings, meatballs, salads, flatbread sandwiches. 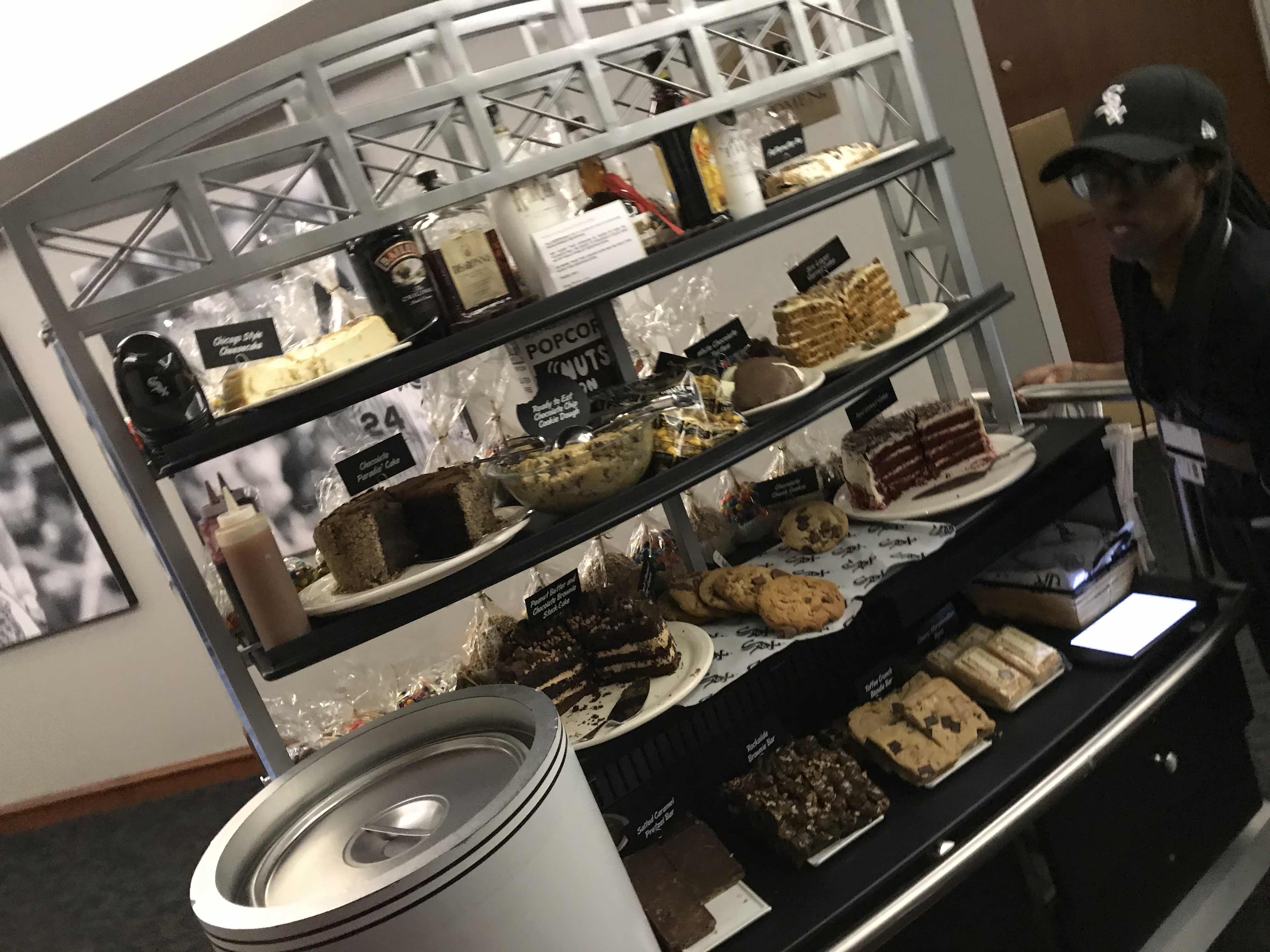 However, the highlight was the huge dessert cart that contained enough sugar and calories to reach the maximum daily allowance times 5,000. :) But how could you pass it up? Massive brownies and cookies. Giant turtles and bowls full of cookie dough. Ice cream treats. Humungous caramel apples, cgeesecake.. And lots more. It was followed shortly after by a coffee cart.
Service was wonderful and staff was super friendly. I brought my sis along - not the foodie sis, but her twin. Foodie sis Becky isn’t all that much into baseball, but Jen is big time. She’s a season ticket holder for the north side team and met her husband at a spring training game. She lives in Central Illinois now but happened to be in town this weekend for her daughter’s basketball tournament, so she was able to meet me there and we had some nice sister time together.
If you ever have an opportunity to enjoy a game from the Diamond Suites, head there hungry! 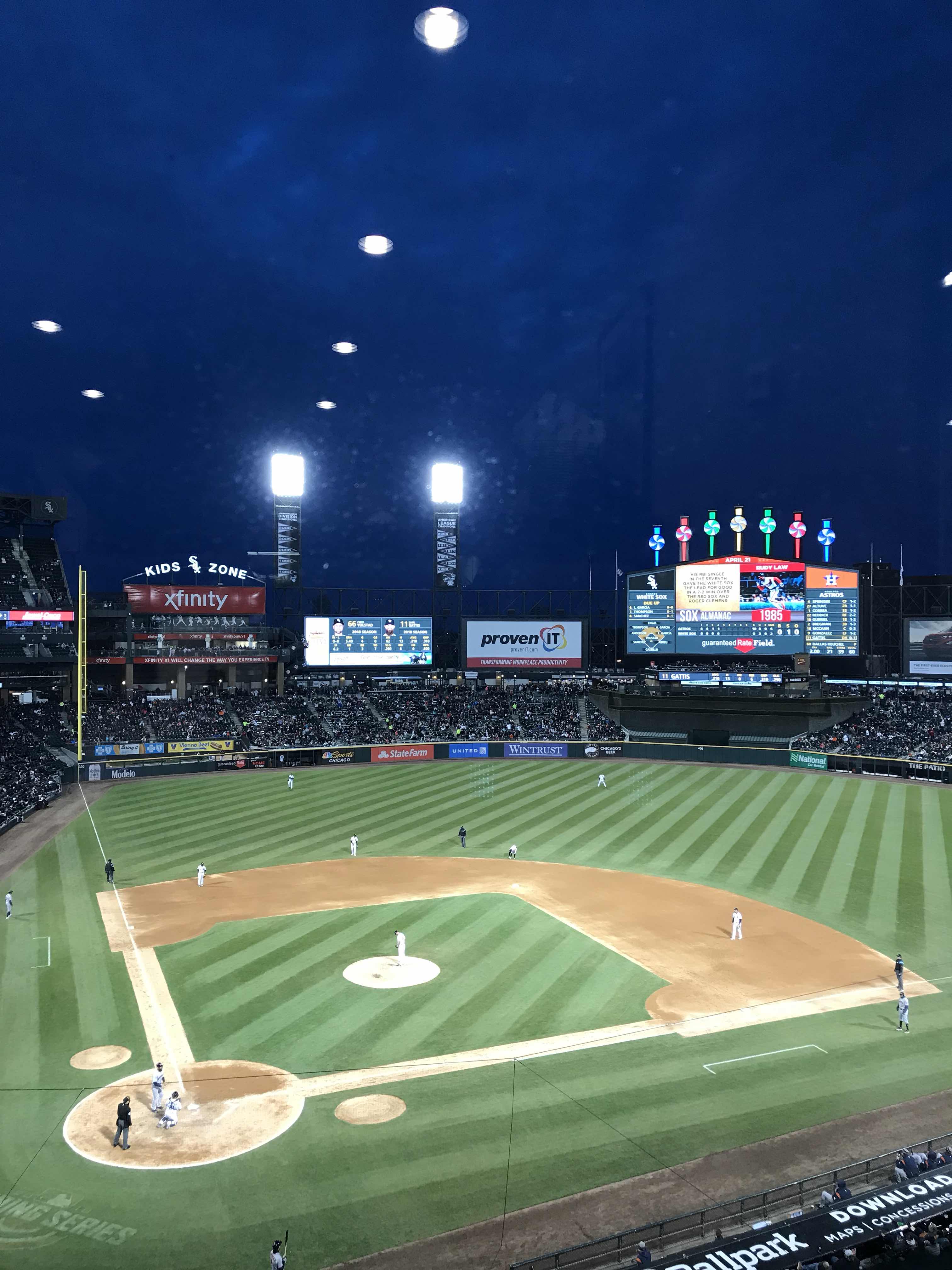 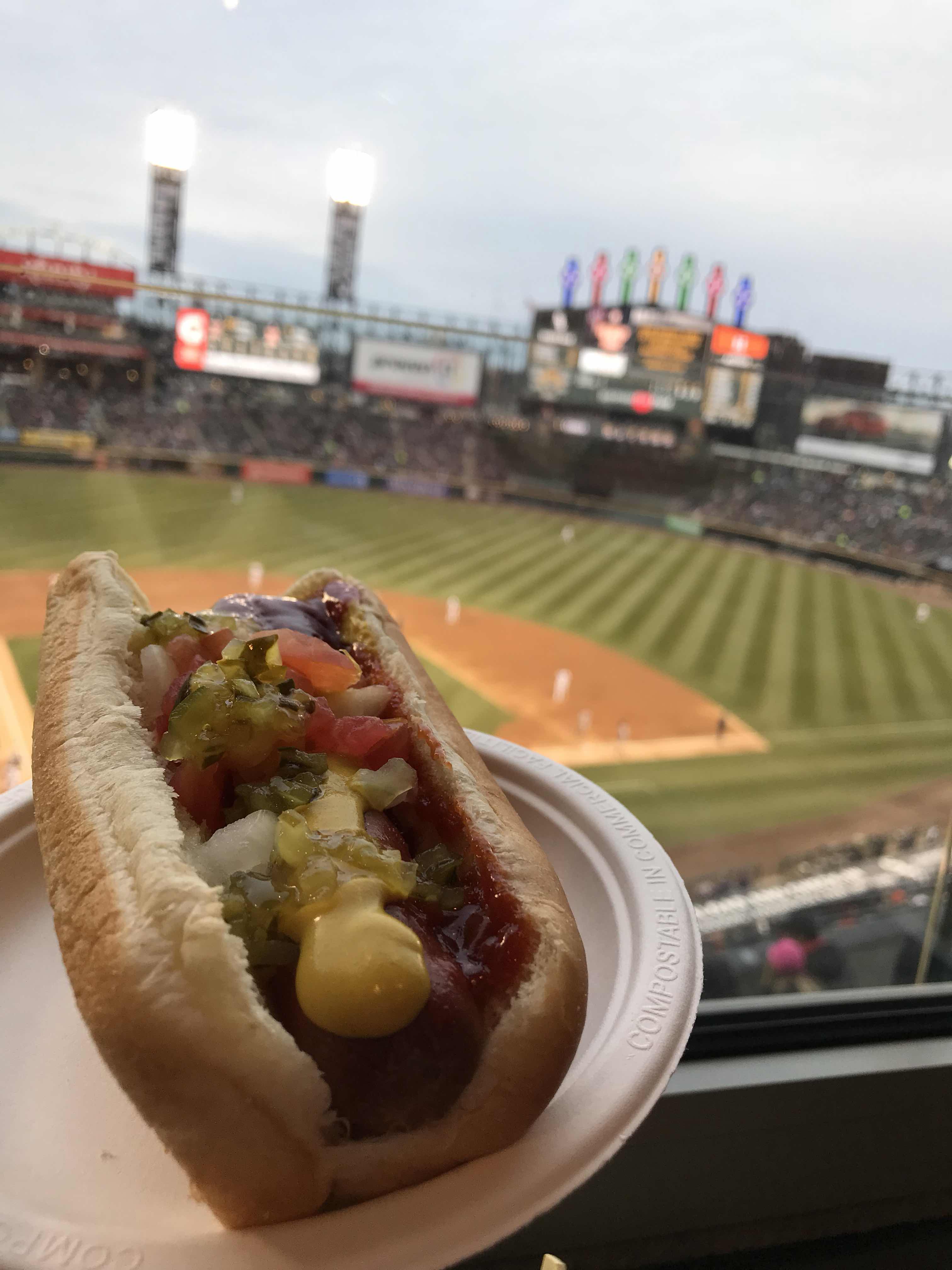 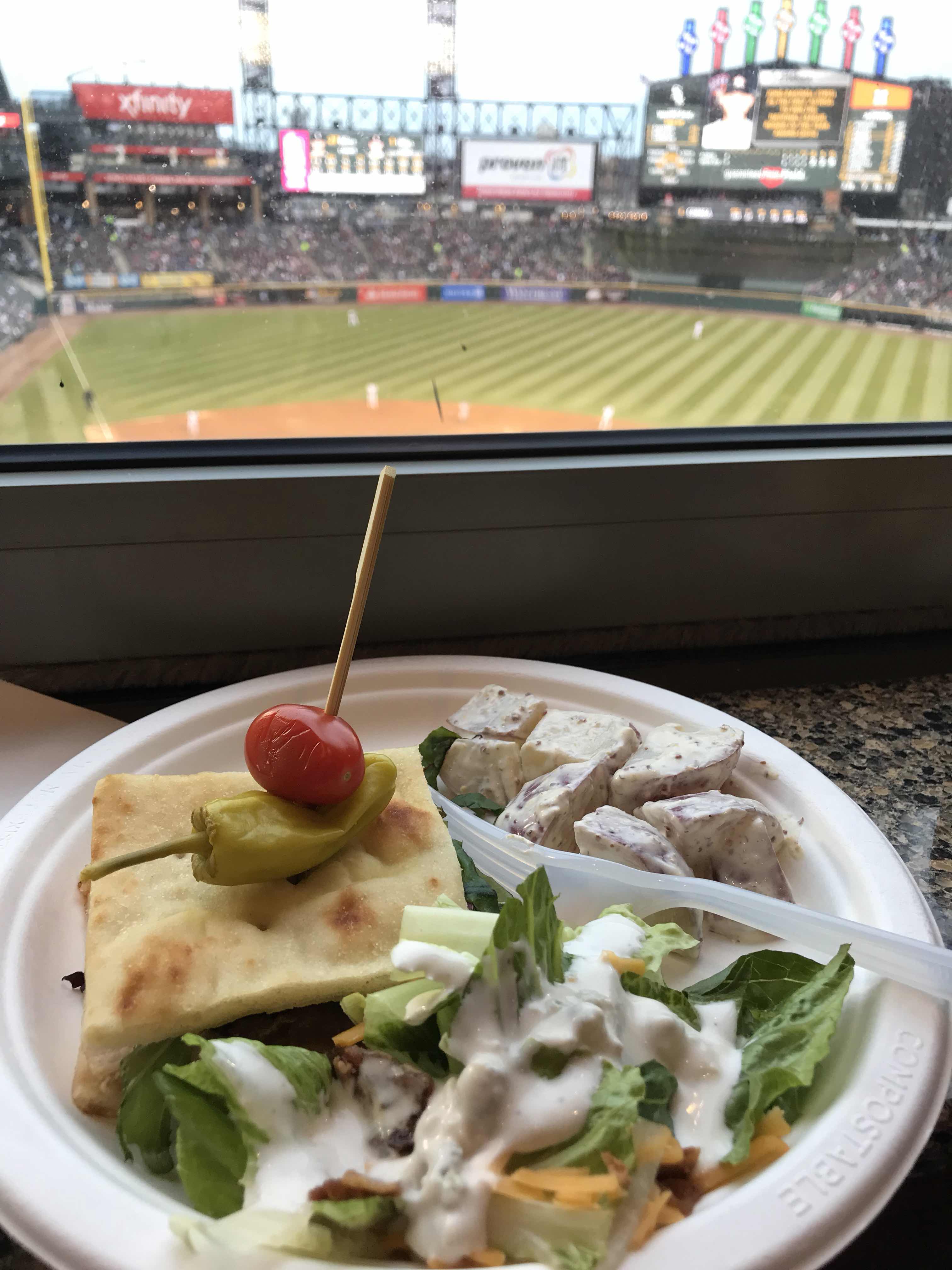 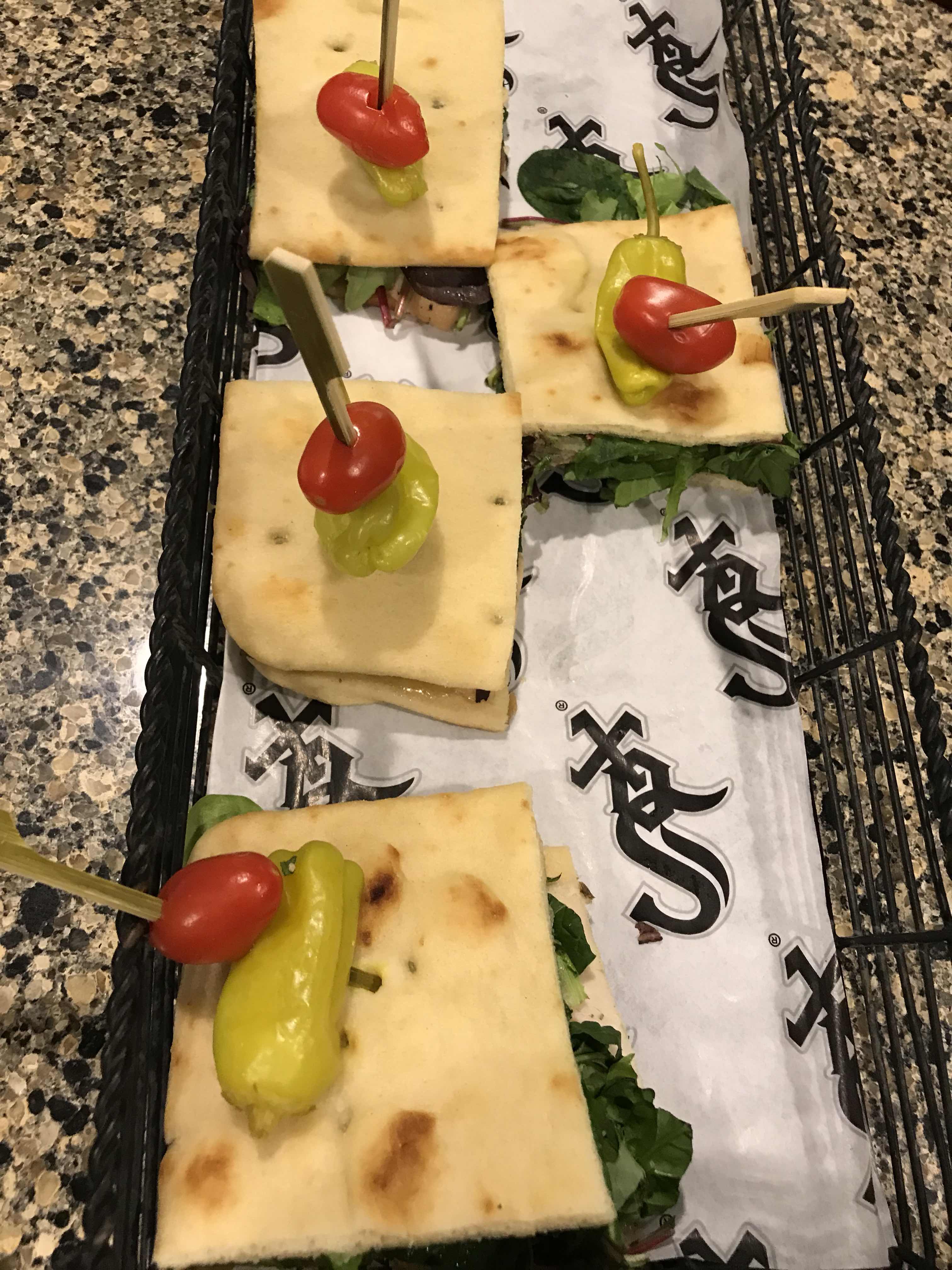 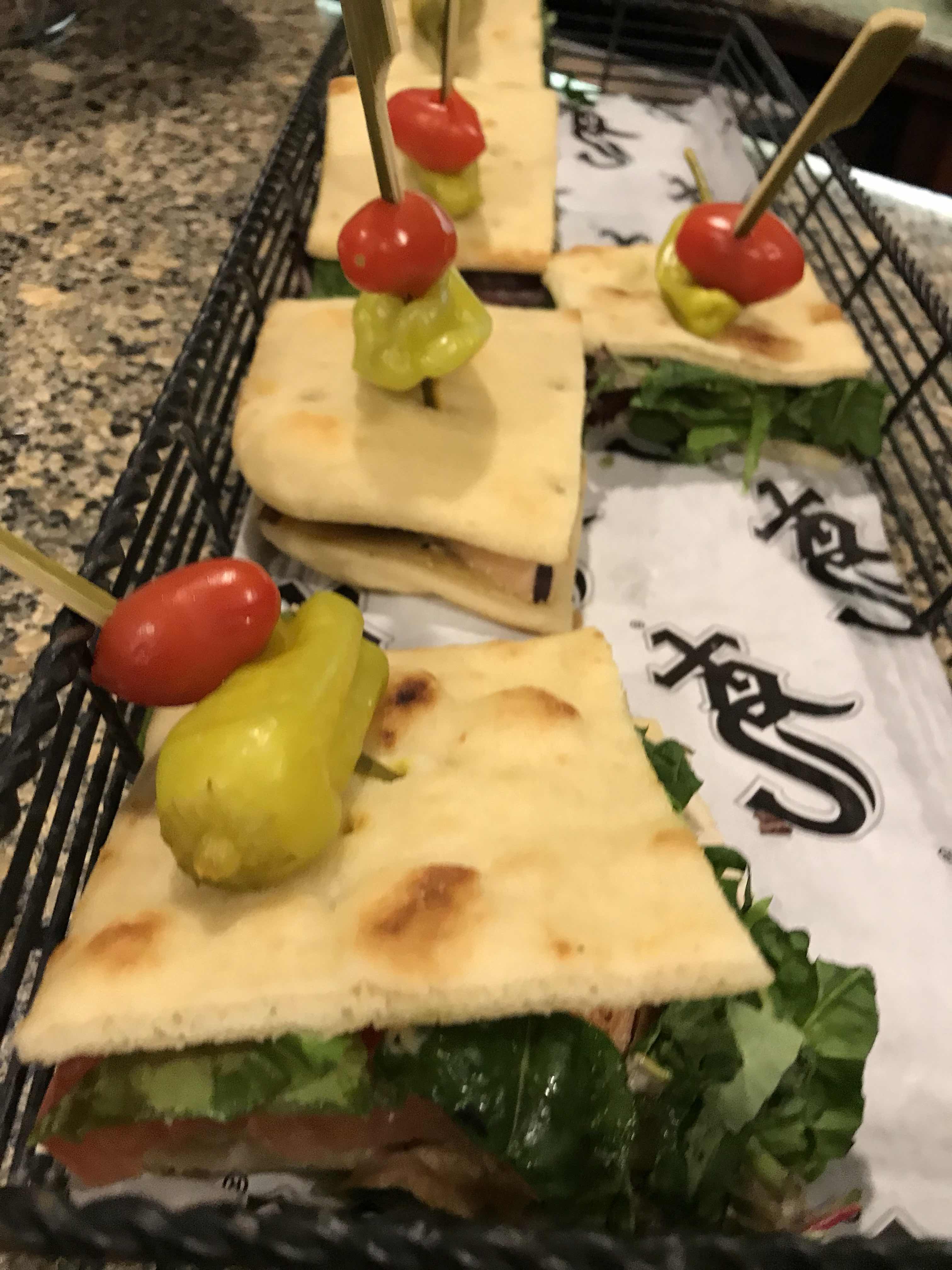 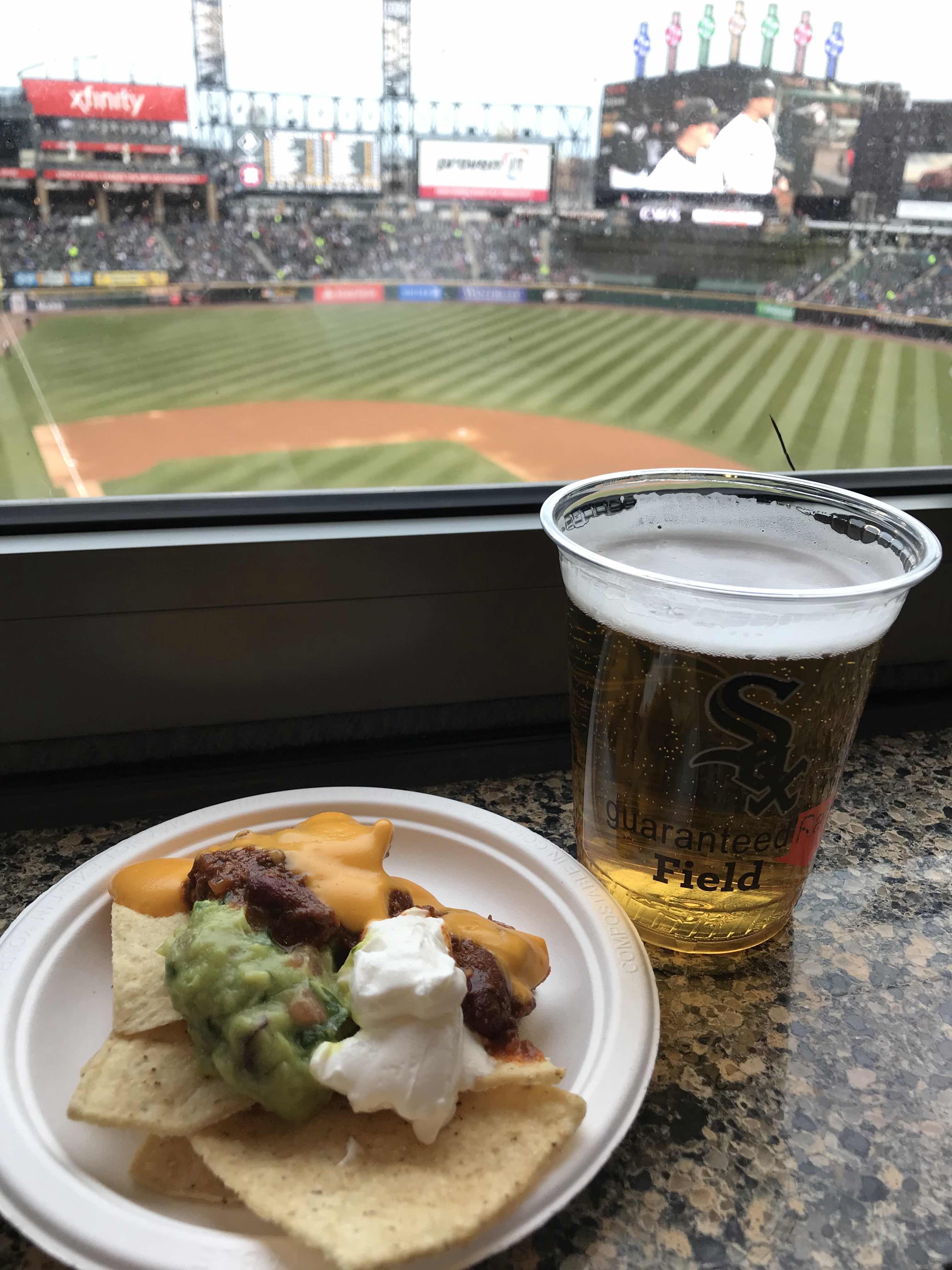 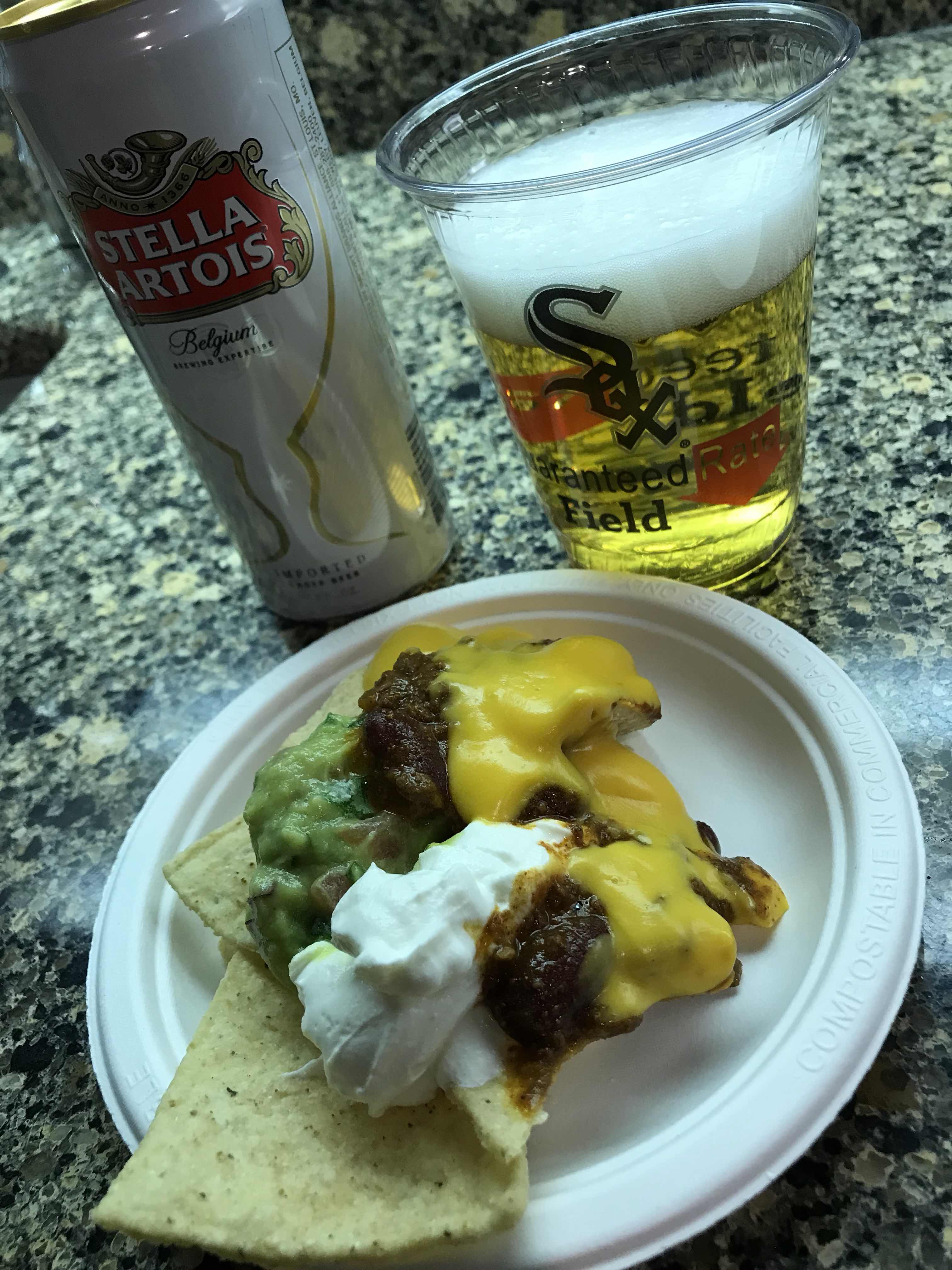 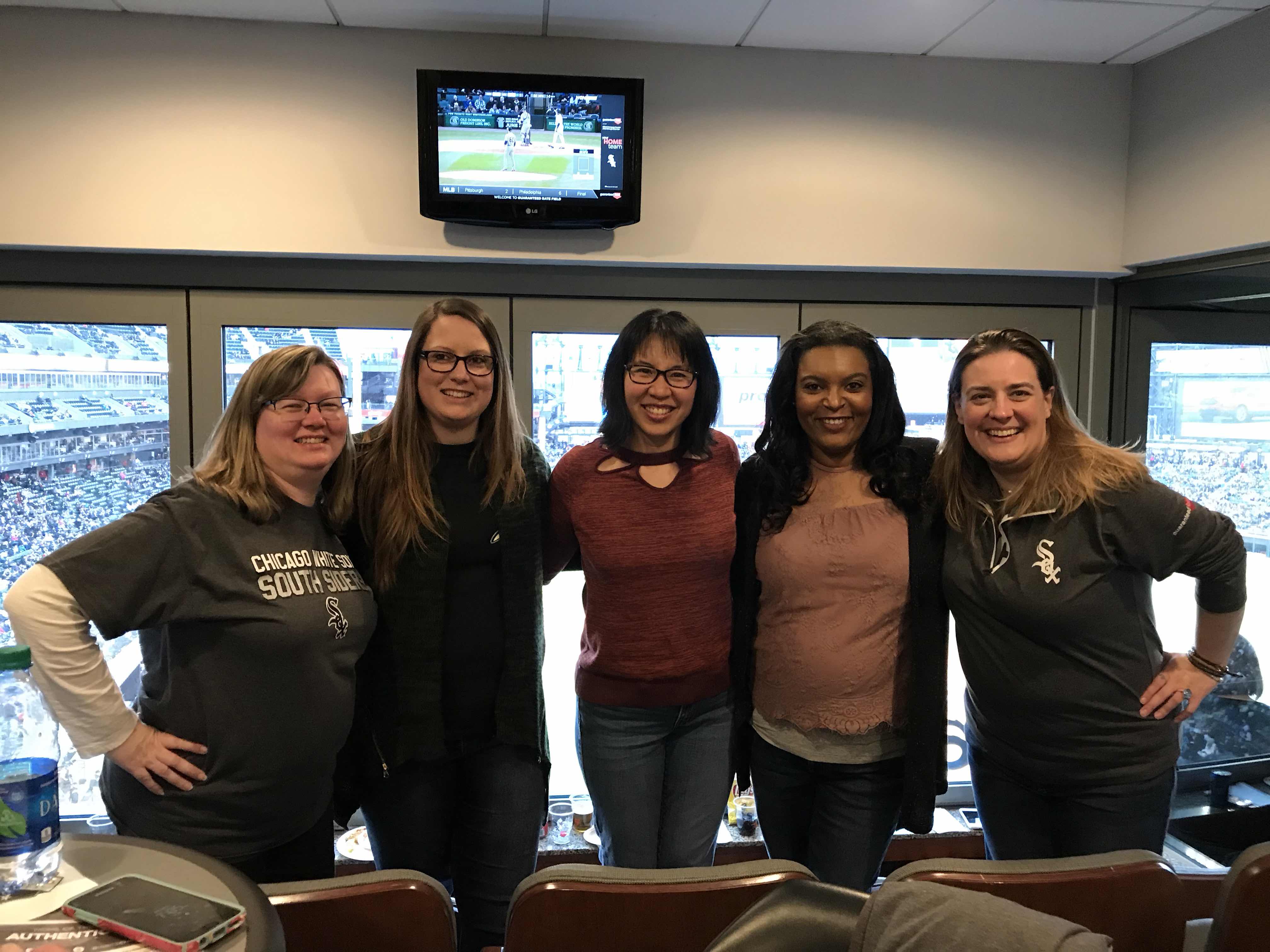