Just about every foodie or chef or restaurant owner I can think of has put out a poignant, emotional, passionate post about the unfortunate loss last week of Anthony Bourdain and how much he influenced them. I wish I was one of them, but I’m not - not because he wasn’t amazing, but because I didn’t realize how amazing he was until I started coming across bits and pieces of interviews and clips and posts of his in the days following his suicide.

If you want to revoke my foodie card, I don’t blame you. How can I call myself a food aficionado and not have been affected by him? Truth is, he wasn’t really on my radar until last year when I saw his expletive-filled response to being asked to comment about elite yelpers. His reply, which went on to cover other forms of social media, too, resonated with a lot of people. 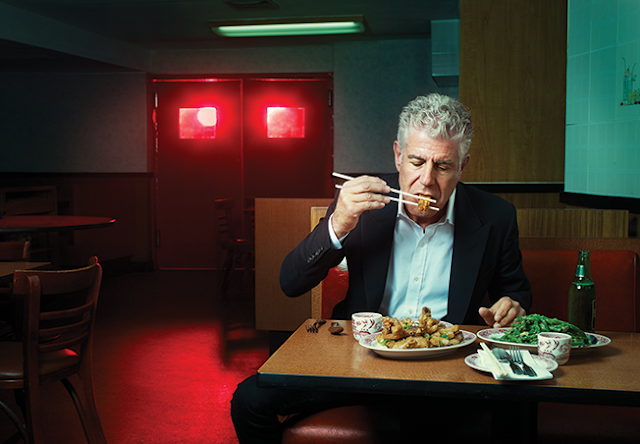 Prior to seeing the three minutes of that interview, I had heard the name and maybe seen a total of twenty minutes of clips from his show. My husband was more familiar with him than I was. You didn’t have to be an intense foodie or a chef or closely tied to the business to be entertained by his show or feel a connection to him, it seems.

I don’t watch a lot of TV - either current or older airings. I work too much and stay busy chauffeuring kids all over the world and dedicating a full hour - or even a half hour - to watching a show doesn’t fall anywhere near the top of the priority list. I started to say that I don’t have the attention span for it, but that’s not true. When I’m into really watching something, I can get lost and next thing I know I’ve been binge watching ER or Parenthood or This is Us for 7 hours and only gotten up once to use the bathroom and pop some popcorn. It’s that I don’t have the time - or make the time, really - for the indulgence of watching TV. But seems I was really missing out on something good. I saw a post this week that although Anthony Bourdain’s show “Parts Unknown” was scheduled to be removed from Netflix streaming today, it will continue to be available “for months to come.” So, it may be time to work in a little break now and then and see what I’d been missing.

As far as Bourdain leaving this earth, it’s another reminder that no one is immune from depression and despair, no matter how famous or rich or put-together they appear to be. From someone who isn’t all that familiar with what he stood for and what good he put out in the world, I can say that from my limited exposure, it appears that for the time he was on this earth he put that time to good use and lived it up as much as he could - and more than many do no matter how long they are here. I’ll take away from this tragedy to seize that zest for all that is out there to explore as he seemed to do, to give your kids more hugs than they want you to, to tell people that you love them no matter how much you’ve already said it and to reach out and be a friend, lend an ear, share a meal and help others see the beautiful value they contribute to the world.