One of our favorite meals as kids was my mom's potato soup. Her's was a simple one - potatoes boiled in salted water with a stick of butter and a bunch of milk added toward the end. I remember her once saying it was similar to the potato soup Julia Child learned to make in France. I'd get a sleeve of saltine crackers and just eat until I was full. It's still one of the most comforting dishes to me.

I've come to love other potato soups, as well. I'm really not a fan of thicker cream of potato soups. I prefer this lighter one. One version of potato soup I really like is the Zuppa Tuscana from Olive Garden. I decided I'd try to make a pot of it at home a while back and now I make it regularly. It's so good.

I used mom's basic soup instruction and I also added some browned Italian sausage, kale and red pepper flakes for a little bit of heat.

5 or 6 large potatoes, peeled and cubed

About a 1 cup of chopped kale leaves 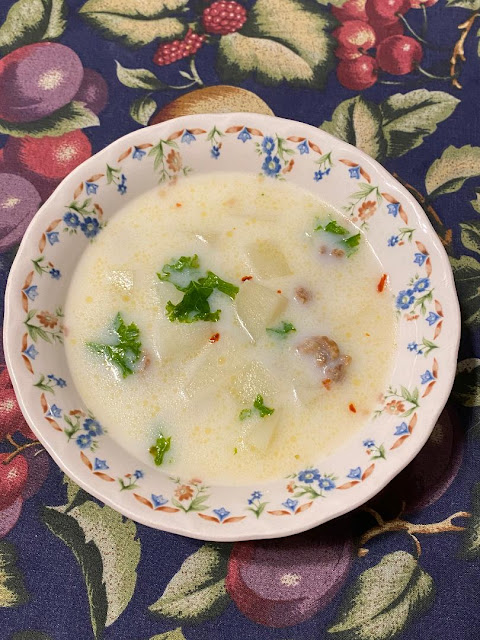 Submerge the potatoes in water and with about a teaspoon of salt and let it boil. In the Olive Garden version, the potatoes are sliced and the skin remains on, so if you like it better that way, leave the skin and slice rather than dice.

Once it boils, reduce the heat, cover and cook for about 15 minutes or until the potatoes have softened. Drain much of the water leaving enough in pan to just come to the top of the potatoes. Return to a low heat.

Add 1 1/2 cups of milk (or half and half). Then add butter. Mom always used a full stick. I try to make it a tad healthier by cutting the butter in half, but my all means, go for a stick if that's want you want. Also add more red pepper flakes to taste and the Italian sausage. Warm it until it starts to bubble at the sides. Add kale and stir. Remove from heat.