If you've never been to a rib fest or a rib burn, you don't know what you're missing. At such events, you'll find serious grill masters from around the country. It's prime rib fest and rib burn season as many of the cooks are traveling from one place to another with a full calendar from Memorial Day to Labor Day. I recently attended Naperville Exchange Club's Ribfest in Naperville, Illinois with nearly 40 vendors. I always like to chat with the experts and pick their rib-cookin' brains. In Naperville I talked to Adam Bolgiano of Two Fat Guys from Massillon, Ohio. 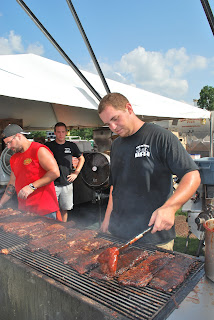 This was his first year at Ribfest, but he's been competing since 2005 and he opened the first Two Fat Guys store earlier this year, serving ribs, pork and brisket. The business was started by his brother's father-in-law, Dale Foraker. "We're now Three Fat Guys and a Girl," he joked.

This season's been a busy one for him as they compete in 10 to 15 rib fests each season, "from West Virginia to Michigan to Pennsylvania," he said. "This is our first time in Illinois."

So, what are his secrets?
1) keep the temperature low
2) spice it up (they use a combination of 15 herbs and spices)
3) the wood (homegrown apple/cherry wood)