It's the time of year that wine aficionados and those in the industry wait all year for -- the announcement of the annual Wine Spectator Restaurant Awards. While the full list will be printed in the August 31 issue (available on newsstands tomorrow), Chicago Foodie Sisters got a peek at who the winners were in Chicago.

Among the Award of Excellence Winners in Chicago are The Florentine, Blackbird, Kinzie Chophouse, The Gage and the Signature Room at the 95th. In the mid-range category of the Best of Award of Excellence, several Chicago dining spots made the cut, including Vivere, Cherry Circle Room, Sixteen, City Winery, Maple & Ash and Gibsons. The sole Grand Award Winner is one that has been on the list since 2004 - Tru. Congrats to all the winners! See the Chicago list below and the full story on the Wine Spectator Restaurant Awards. Did your favorite make the list? 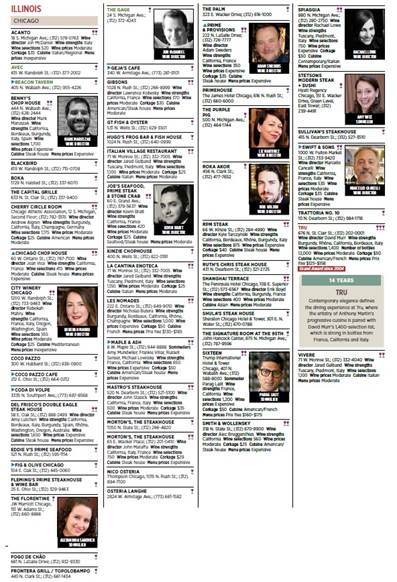 New York, NY—Attention, wine lovers around the world! Wine Spectator has released the winners of the 2017 Restaurant Awards, which recognizes the world’s best wine lists. This year, the Restaurant Awards program honors 3,592 dining destinations from all 50 states in the U.S. and more than 75 countries internationally.

The Restaurant Awards began in 1981, and there are three levels: the Award of Excellence, the Best of Award of Excellence and the Grand Award, with 2,335; 1,168; and 89 winners this year in each respective category. Five of the Grand Award winners—Del Frisco’s Double Eagle Steak House in New York, Grill 23 & Bar in Boston, Les Climats in Paris, PM & Vänner in Växjö, Sweden, and Wally’s Beverly Hills—are first timers.“Restaurants continue to raise their game when it comes to wine, and we are particularly proud to present this year’s winners,” said Marvin R. Shanken, Editor & Publisher, Wine Spectator. “As wine becomes more important to diners, the Awards program is thriving—with an increasing number of entries, as well as growing print, digital and social audiences. Wine Spectator congratulates each and every award winner.”
All winners are profiled at Restaurants.WineSpectator.com and in the Restaurant Awards app—both of which were launched last year, and have since been updated with improved features, visuals and performance. The app, available free on the App store, allows iPhone and iPad users to easily find nearby award-winning restaurants, with maps, plus helpful information about cuisine, wine and pricing.
The Award of Excellence recognizes restaurants whose wine lists feature a well-chosen assortment of quality producers. Best of Award of Excellence recipients offer more extensive selections with significant vintage depth and excellent breadth across multiple regions.

The Grand Award is the program’s highest honor. This elite group comprises the world’s best wine programs, which deliver serious breadth of top producers, outstanding depth in mature vantages, excellent harmony with the menu and superior presentation. Wine Spectator carefully assesses each Grand Award candidate, including rigorous independent, on-site inspections of the wine program, cellar, service, ambiance and cuisine of the restaurant.
The full list of award winners is available in print in Wine Spectator’s August 31 issue, on newsstands July 18; online at Restaurants.WineSpectator.com, where visitors can search and access exclusive content; and on iOS via the Restaurant Awards app.Follow the Restaurant Awards on Twitter and Instagram, with hashtag #WSRestaurantAward.