My introduction to ollie bollen

I was finally introduced to ollie bollen. What a yummy little Dutch Treat!

I've been hearing about it for years as there's a big Dutch community where I live. Among Chicago's many neighborhoods is Roseland, once a spot where many immigrants settled when they came from the Netherlands. Later, Roseland peeps began moving south and east in large numbers to the suburbs of South Holland and Lansing. Both communities still have a heavy concentration of Dutch residents. Many Dutch families have moved even father east into Indiana, but still have kids attending school in the area or attend one of the many churches here.

Yesterday I had an assignment for a newspaper that I do writing an photography for to go shoot photos at at fall festival at the Lansing Christian School. The event was HUGE, with games and inflatables and food and more outside. Then inside were several more spots with food, a movie room room and other rooms with activities for kids, face painting, two silent auctions and a big live auction. One room inside was the "dessert" room, where you could buy cupcakes, pie and apple, pumpkin or cherry slices - and ollie bollen. There were big tables full of nothing but ollie bollen. And it sells like crazy. All the homemade ones that were made that morning would all be sold out by night's end, I was told.

These little doughnut-like pastries are traditionally made with raisins and coated with sugar. I got a half-dozen with and a half-dozen without.  I'm glad I finally got to try out these treats, made with love by the Dutch ladies of the school and area churches. I look forward to having them again. 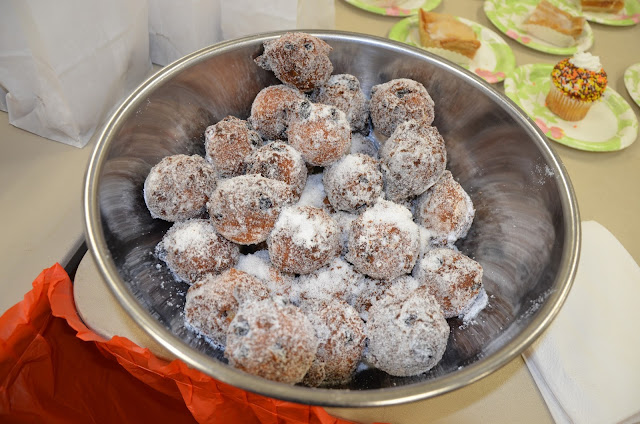