Last year I thoroughly enjoyed being part of the Illinois Farm Families group of City Moms. The group of ladies from Chicago and the suburbs were taken on several tours last year to help us get to know more about farming and farm life and where our food comes from. Fortunately, we're being invited to more events this year and I was excited to go on the first tour this year to visit a cattle farm in Sandwich, Illinois followed up by a chef demo at the DeKalb County Farm Bureau. 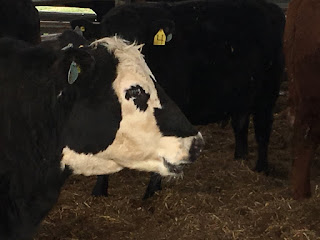 Seven generations have occupied the approximately 1100-acre land of Adams Farm and to start our visit we gathered in an old barn that was built by the grandfather of our host, Alan Adam. We sipped on hot cocoa and tea and sat on hay bales while Alan gave us a rundown on how things work there where they have about 60 head on their calf farm and then another 900 or so head on their feed lot.

I was impressed at how resourceful farmers are as they work to manage feeding and caring for the cattle (and balancing with maximizing profit) by not just utilizing land unproductive for crop growth as pasture, but by incorporating food waste that is digestible for cattle from different sources, including a local Del Monte vegetable cannery plant. The cob and husk, which instead of being discarded from the factory becomes feed for cattle. We also learned a bit about how durable a cow's digestive system is. 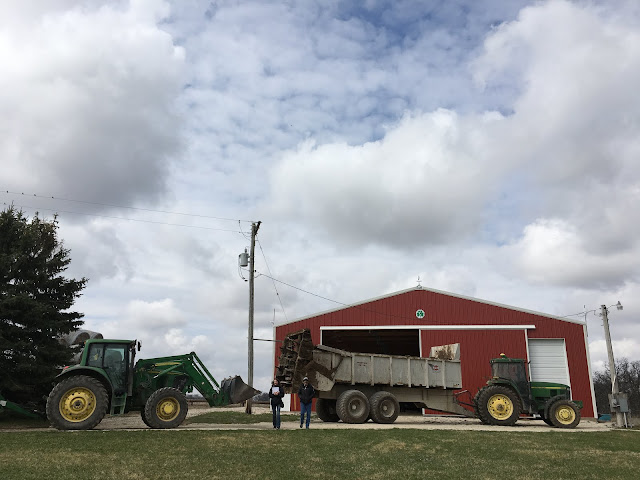 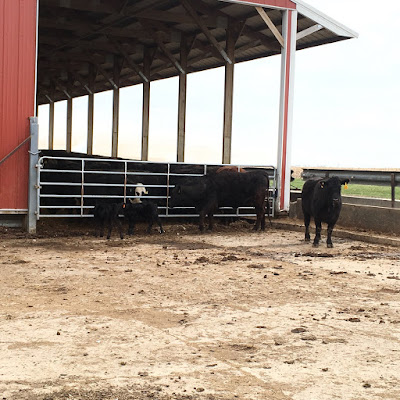 The focus of this tour was on breeding and I was surprised at how complex, yet how simple and natural the process is at Adams Farm. They raise a mix of Angus and Simmental breeds, Angus being the biggest in demand as food trends in recent years have dictated a desire for the high-quality meat they produce. Alan talked a bit about how much farmers need to adapt to meet current demand and how much farming has changed since his career began. Cows are bred by Angus bulls the natural way without artificial insemination. Heifers (first time moms) are, however, impregnated by artificial insemination to help ensure a small calf for their first birth, which is in the best interest of the heifer and the farmer. The timing and control of breeding ensures efficiency as cows are bred in a two-month or so window and then birthing subsequently happens in the same time span nine months later. Like humans, a cow's gestational period runs about nine months. They're able to do much grazing during times when grass is at its peak of growth and they get their water from a stream and spring that runs along the property. 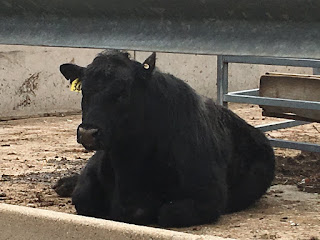 As with every farm I've encountered, it's a family business. Son Ross also filled us in a bit on the first days of a calf's life and what is done early on to ensure that each calf is healthy. 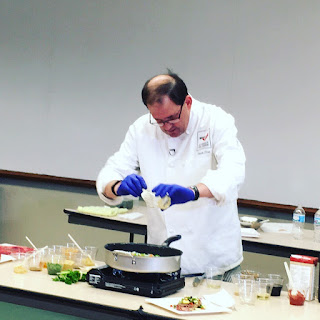 One thing I've learned on these tours is that antibiotics and vaccinations used in meats are something that we need not unnecessarily fear. Antibiotics are used minimally only when needed in the care of sick or diseased cows. And once given there are strict guidelines as to moving those cattle into the food chain after antibiotics have been administered. The vaccinations are not much different from what we give human infants. They are to protect from disease and prevent significant loss of cattle. The calves also get passive immunity through their mother's milk that offers some protection. One example that Alan cited was pink eye, which can be very painful and usually causes total blindness in cattle. It has been eliminated from the farm due to use of vaccinations. He said they haven't encountered a single case in over four years. The three injections they get shortly after birth protect them from at least 15 common diseases.

On each of our tours we have a meeting point and then the group rides to the farm via bus. On the bus we have had farmers ride along to give us a little background on their area of farming and to answer questions. It was during this question and answer session that it became clear how difficult it really is to be profitable and how much work is involved. It really sunk in that farmers never really have a day off. The cattle don't decide not to eat on weekends. They need to be cared for 365 days a year. It's definitely an under-appreciated job, but I've yet to talk to a farmer who would trade it for a 9 to 5 desk job with weekends off and paid holidays. Each tour I take helps me gain more respect for the work a farmer does. 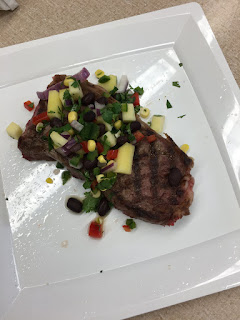 Our day ended with a cooking demonstration where we learned a little about ways to prepare beef and the differences between the various cuts. It was a nice end to the day with a little lesson on use of spices and flavor enhancers and using flavors that compliment one another to present a meal in a new way.