During quarantine, I've been making quite a bit of comfort food for my family. One of those items I have made a few times is stuffed green peppers. I've been making them since I first got married after one of my older co-workers, a sweet Polish lady, taught me how to make them.

In recent months I've seen others post about stuffed peppers and noticed that they don't boil the peppers first. I've always pre-boiled them. And they always turn out so good. I'm hesitant to try it without pre-boiling because I like them soft rather than the peppers having a crunch.

Stuffed peppers are kinda like my soups. I never really make the same batch twice. I often alter it based on what I have on hand. 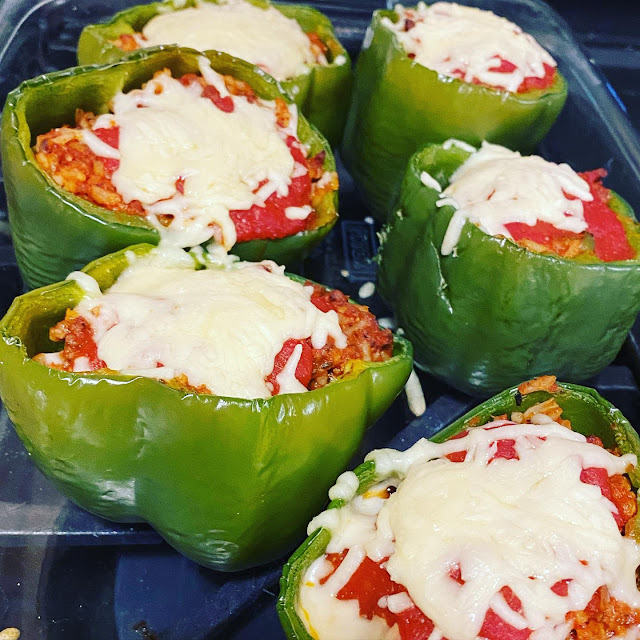 But I'll share the basic recipe I learned from Jeanine almost three decades ago.

Ingredients:
8 medium-large green bell peppers
1 pound ground beef
1 boil-in-bag rice
1 24-ounce jar pasta sauce
Italian seasoning, dried minced onion and black pepper to taste
About 4 ounces shredded mozzarella cheese
Wash peppers and remove tops and clean out insides. Dice up the pepper that has been removed from the top.
Brown ground beef,  adding Italian season and black pepper as it cooks. While beef cooks, prepare boil-in-bag of rice according to instructions and start a pot of boiling water to boil the peppers.
Drain beef and add 3/4 of jar of sauce, diced green pepper and rice. Add additional seasonings and simmer for about 10 minutes.

Once water comes to a boil, add peppers and boil for about 5 minutes or until soft.
Remove peppers from pot of boiling water and stand up in a baking dish. Spoon filling in to peppers. Top with remaining pasta sauce.

Bake at 350 degrees for about 30 minutes. Remove from oven and top each with cheese. Return to oven for 5-10 minutes or until cheese is melted.

***Jeanine also used the same filling for stuffed cabbage (or golumpki), so often when I make stuffed peppers, I double the filling and also boil a head of cabbage to make the rolls.

***Also, you can make the filling and rather than stuff the peppers, dice up a couple peppers and then make a veggie broth. Add the filling along with a can or two of diced tomatoes and you have a yummy stuffed green pepper soup.