Yesterday, my sister, Jen (another of our foodie sisters -- there are actually four Clark sisters) planned for us to go to the Cubs game. We are a family of die-hards and Jen has been a season ticket holder for years. Last night was Ron Santo night, when they honored the great (but yet to be Hall-of-Fame inductee) former Cubs third-baseman and radio announcer. He passed away last year following a battle with cancer and nearly lifelong battle with diabetes. He was being honored with a new statue of him being placed in front of the ballpark.

So, Jen invited me to go with her to the game since she's also a big Santo fan. A former foreign exchange student of hers, Rui, was visiting from Japan and it was her birthday, so she joined us. And at the last minute my dad also decided to tag along, so we had a fun night together with dinner plans in Lincoln Park before the game at Jen's favorite sushi place.

I remembered a place I'd written about earlier this year in a Foods article on meatloaf called The Meatloaf Bakery and since it was a block south from our dinner destination on Clark, I told my sis we had to stop in so I could get a taste and meet the owner, Cynthia. It ended up being our first stop of the day. We were all hungry and everything in the case looked amazing -- way too pretty to eat! 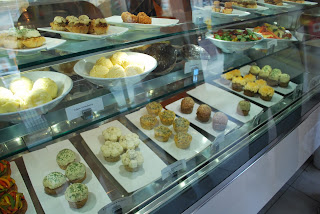 Can you believe all those pretty little things are meatloaves??? 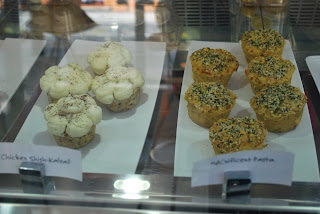 Each is topped with potatoes, stuffing, pasta or veggies. They're adorable! 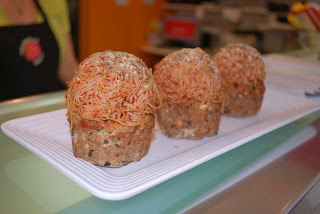 This was called the "Loaf-A-Roma" with mozzarella, sun dried tomatoes, fresh basil and a splash of red wine mixed in to Italian sausage and beef. It's topped with angel hair pasta and served with marinara sauce. Looks magnificent...and tasted magnificent!!! When we were growing up and mom made a big pot of spaghetti, I was always the one who ate the meat and had a little pasta to go with it, so this suited my taste buds -- more meat than pasta. :)

Since we had dinner plans, we decided to try some "loafies," which are bite-size versions of their specialities. I tried the Loaf-A-Roma as well as the No Buns About It Burger Loaf, which was a mini-loaf burger with bacon, cheddar, onions, mustard, ketchup, pickles and beef and topped with cheesy taters and their special sauce. Just thinking about it is making me want to drive back up for more. It was delish!!! The other one I tried was A Wing And A Prayer Loaf, a hot and spicy wing sauce added to crumbled blue cheese, ground chicken and celery and topped with buttery blue cheese crust and served with ranch dressing. My dad liked it so much, he decided to get a full-size loaf and forego the sushi. He talked about the meatloaf ALL NIGHT -- about how tasty it was, how creative the names were and how it was the most brilliant food creation he'd ever come across. Here's what my sis tried: 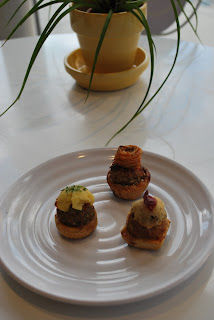 The Loaf-A-Roma, the Mother Loaf (kinda like a classic meatloaf with onions, ketchup and seasoning topped with Yukon Smashers - which you can also get as a side dish) and the Herby Turkey Loaf. She said the Herby Turkey Loaf was her favorite and when I tried one I agreed. It was made with ground turkey and a blend of spices, garlic, red pepper, fresh herbs and dusted with aged Parmesan cheese. On top was white bread stuffing and cranberry.
I also tried a sampling of Chicken Shish Kaloaf, which was also superb. But then again, EVERYTHING we tried was superb. The side dishes looked wonderful and if we didn't have dinner plans elsewhere, we probably would have hung out for a long time and tried almost everything. In the case were also side dishes - A Veggie Table and  Greens and Things, which were soooo colorful!!! There's also three varieties of mashed potatoes that you can order in quantities of two. And there were woopie pies that looked so inviting for a chocoholic like me and which I totally would have devoured if we didn't also have dessert plans a few doors down at Molly's Cupcakes. Oh, and for the vegetarians, there was also a Yentl Lentyl Loaf, made with lentils, brown rice, veggies and cheese and topped with colorful bell peppers. Each loaf also comes with a unique sauce.
Check out the full menu on their website http://www.themeatloafbakery.com/everyday-favorites/. Also, The Meatloaf Bakery was featured on the Food Network series Sugar High earlier this week and it will re-run on September 9th at 9:30 Central Time. And here's the meatloaf article I wrote earlier this year for the Northwest Indiana Times/Shore Magazine that included the Meatloaf Bakery and includes a recipe from Cynthia - http://www.nwitimes.com/niche/shore/food-and-drink/article_70e9fcc6-32fa-5f92-99aa-6a9c7f8e8f0f.html?mode=story.
﻿
Labels: bakery chicago cupcakes lincoln park loafies meat meatloaf