Meet the Authors this Thursday! They will be will be discussing the book and signing copies at the State Street Barnes & Noble bookstore, 1 E. Jackson Blvd., on Thursday, May 5 at noon.

A vegan and a carnivore walked into a restaurant, and out came the history of food in Chicago.  It’s a rich tale, one that took them across Chicago’s Black Belt, into its historic German and Irish enclaves, through today’s Puerto Rican neighborhoods and back to what may have been the first documented morsel ever consumed in Chicago.

“This is a true Chicago book,” says Rosing, executive director of the Steans Center for Community-based Service Learning at DePaul University.  Old-timers will recognize the places of their past and newcomers can gain a fresh understanding of Chicago’s deep celery roots. That’s right, what is now the Lakeview neighborhood was once dotted with celery and vegetable fields. Dairy farms were pushed to the suburbs to protect delicate noses from the smell of cow pies, not—by the way—a Chicago delicacy. 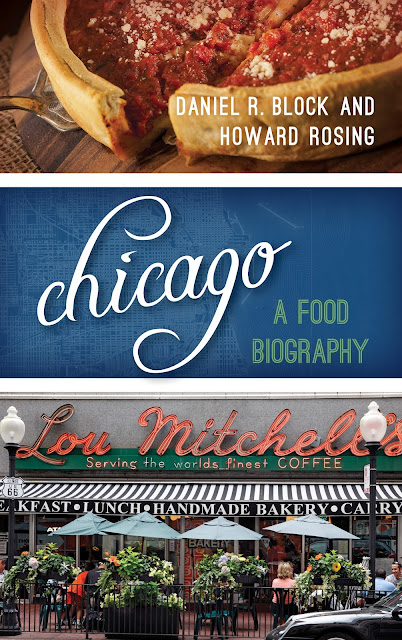 Rosing, a cultural anthropologist, contributed content on Chicago’s earliest residents and immigrants, exploring the meaning they placed on the foods they brought with them and developed later, after blending recipes with foods they discovered in their new city.  He also delved into the city’s food manufacturing past.

Block is a professor in the Geography program at Chicago State University. A self-described food geographer, he wrote the restaurant, supermarket, and retail sections of the book, as well as detailing Chicago’s vast natural resources and agricultural history.

Today, Chicago is home to 22 restaurants that earned Michelin stars in 2016. These accomplishments were built on a history of food invention and innovation in Chicago that includes flaming saganaki cheese served in Greek restaurants, gyros cut from a spit and Cracker Jack.

The jibarito was introduced in Chicago in 1996, according to Block—the carnivore—who calls it a delicious homegrown invention of food vendors in Humboldt Park similar to a torta but served between fried plantains with shredded pork, tomatoes and cheese. There is a vegetarian version too.
African-Americans earned credit for being the first to combine southern style barbeque ribs and sausages and serving it with French fries and white bread, a common dish in the city.

Other famous items that were created or produced in the Chicago area are Wrigley gum, the Milky Way bar, Milk Duds, Tootsie Roll, Red Hots and Jelly Belly jelly beans, among others.

Why is it important to know a city’s food history?

Block says food reveals a lot about the everyday lives of Chicagoans. From the offerings of street peddlers, to the historic produce and meat markets on South Water and Fulton streets, to the 1893 World’s Fair where you could get a beer outside the fairgrounds from Herman Berghoff: food is a tool that reveals things about culture.

“People don’t realize that things they think are new trends have been in Chicago for a long time,” Rosing says. Oyster bars have been here since about the 1850s. German beer gardens appeared in the mid-19th century. “If you are going to live in a place and form an attachment to a place, you should know its history,” he recommends.

Writing a book on food means there is going to be some sampling involved. “I never had a pork chop sandwich,” said Block, who is Jewish. But for the purposes of investigation, he indulged. “It was developed on Maxwell Street. It’s a bone-in grilled pork chop that is juicy and messy, and was it good!”

Writing the Chicago installment of the Food Biography series—there also are editions for New Orleans, Kansas City, San Francisco and Portland—was both a culinary and a research adventure.
Sources of information were diverse and plentiful, such as the diary of an 18-year-old girl eating at the Edgewater Beach Hotel on Independence Day 1918, community cookbooks available at the Harold Washington Library and menus dating back to the 1850s tracked down at the Chicago History Museum. It took about two years to piece together this historically overlooked, yet vital portion of Chicago’s past.

After chatting with readers, Rosing realized that, “People from Chicago read the book to find themselves in it, their neighborhood restaurants, anecdotes they recognize because maybe they experienced it.  They also say ‘how come you didn’t include this?’ "

The authors will be discussing the book and signing copies at the State Street Barnes & Noble bookstore, 1 E. Jackson Blvd., on Thursday, May 5 at noon.

Denise Mattson is a City News Bureau of Chicago alum who writes locally on a variety of topics.