When we first got married and moved into our house, we were left with an ugly and barely functioning electric stove. My brother, who lived on the same street just 8 houses away had just ordered a new stove and we inherited his a few months after we moved in.

It was a very wide appliance, but I didn't mind. It was wider because in the center area in between the burners was a huge griddle. I used it all the time - especially for pancakes and for grilled cheese sandwiches. That stove served us another decade or so before it finally bit the dust and I couldn't find a replacement anywhere that had a big griddle in the middle. I really, really missed it. Since then I'd been using teflon pans for making things I would have prepared on that griddle. And I have for years had a griddle on my wish list to put over the burners that I've never gotten around to buying.

Hubby is a big fan of cast iron. He's been using cast iron pans on the grill for years and for scout camping trips. So, when I came across this 10 1/2 inch round cast iron griddle by Lodge, I couldn't pass it up. I had used a cast iron skillet in recent months, but when you simply want to flip a pancake or a sandwich, it's nice not the have the high sides in your way.

It works great and I wish I would have purchased it sooner. It brown the bread on sandwiches nicely. In the photo below, I was using some pretty large bread, but if I'd used standard white bread, I could have easily fit two sandwiches on it. On the weekend, I'll have to get out the pancake batter and give it a try. Although a large griddle that covers two burners would come in handy in our house of hungry boys, this one is on the lighter side for a piece of cast iron cookware and it stores away easily and doesn't take up a lot of room. 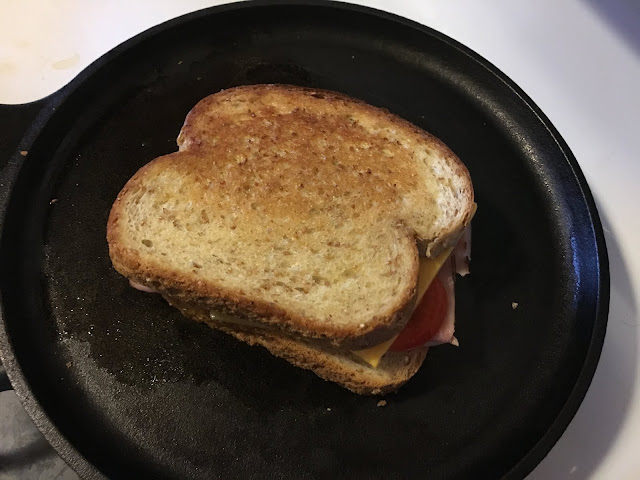 I plan on adding to my Lodge collection bit by bit. They are nice sturdy pieces that I know will last for a long time and that are high quality. They also get points for manufacturing all their seasoned cast iron in the U.S.A. For more info on Lodge cast iron products, visit LodgeMfg.com.