Countdown to the Krispy Kreme Return to Chicagoland 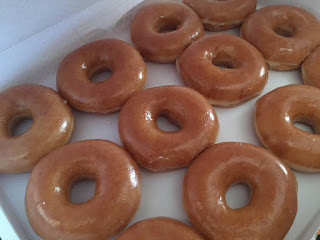 Guess who's back? The maker of the original classic glazed doughnut - Krispy Kreme. After a long absence from Chicagoland, it's a matter of hours - not days or weeks or months - before the Homewood store opens and Chicagoans can get their delicious doughnut fix again. Krispy Kreme's Homewood store at 17815 S. Halsted Street will be the first of eight coming back to Chicagoland. 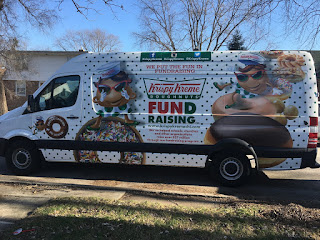 Over the weekend I had the privilege of receiving several dozen doughnuts to pass on to some local people -- to raise awareness off the return of Krispy Kreme and put a smile on their face by giving them a taste of the famous doughnuts in advance of the opening. I had a lot of fun running around town to make deliveries. I did a live Facebook video as I set out and I monitored comments and surprised a few others I didn't originally have on my list. I also suggested that our local first responders in Homewood and Lansing would love to try them out and they made deliveries to our fire and police departments. Here's a few pics I snapped on my Saturday afternoon adventure with a trunk full of Krispy Kremes. :)

Pretty soon you'll be able to enjoy them again, too. See the full press release below on the opening activities -- and learn how you can score free Krispy Kremes this year! 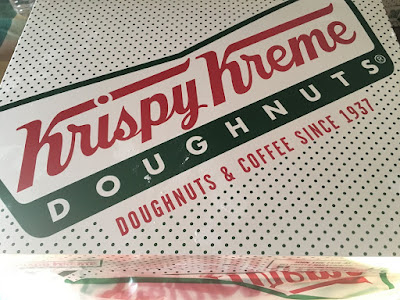 The highly anticipated Grand Opening of Krispy Kreme in Homewood will honor the first 100 customers in line at the store (drive-thru customers not included) with:

Lineup begins the evening before, January 9, in a heated tent and customers will receive a line placement number. Customers must be present until doors open on Tuesday, January 10 at 6:00 a.m.

The opening day celebration begins at 7:30 a.m. with the acclaimed Homewood-Flossmoor High School Viking Marching Band rolling in the festivities, which include a ribbon-cutting ceremony at 8:00 a.m. with Village dignitaries and many more surprises.

Homewood-Flossmoor High School’s radio station will be broadcasting on WHFH 88.5 FM, and VTV can be seen at www.vikingtelevision.com.

“We are excited to join the Homewood community with our first Krispy Kreme Chicagoland location,” said Carlos Larcada, President of Chicagoland Restaurants, LLC. “We’re ready to turn on our Hot Light™ and serve up hot, fresh Krispy Kreme favorites.”

The Homewood store will showcase Krispy Kreme’s new rebranded design to create a classic welcoming atmosphere for customers to relax and enjoy their treats. The shop will feature Krispy Kreme’s Midwest premiere of its NEW premium coffee, ground fresh every time it is served, and more than a dozen one-of-a-kind doughnuts. This location also will house a 24-hour drive-thru.

Krispy Kreme favorites have captured the hearts of doughnut lovers since its first factory doors opened in 1937 in Winston-Salem, N.C., and the new location will not disappoint the doughnut legacy’s loyal fans. As the new neighborhood doughnut destination, Krispy Kreme in Homewood will offer such staples as the signature Original Glazed, Glazed Chocolate Cake and Chocolate Iced with SprinklesDoughnuts from the traditional menu, and new seasonal recipes will rotate year-round. For a refreshing sip, the shop will feature a drink menu including Krispy Kreme Smooth drip coffee, crafted specialty lattes, and Frozen Chillers from Krispy Kreme’s café favorites.

“I am beyond delighted that Krispy Kreme Doughnuts will soon open here in Homewood,” said Rich Hofeld, Homewood Village President. “Their location in our Halsted Street commercial district is a great addition to the community and I look forward to stopping by whenever I am in need of something sweet.”

Download the Krispy Kreme Hot Light™ mobile app to be one of the first to see Krispy Kreme’s iconic Hot Light™ go on in Homewood. Go to www.hotlightapp.com to get Hot Light™ alerts and store directions to your smartphone.

For more information visit www.KrispyKreme.com  and www.krispykremechi.com. Follow along the celebration on social media at #KrispyKremeChicago and on Facebook at Krispy Kreme Homewood.