My favorite sandwich for over 20 years

Back in high school when my husband and I were dating, we'd go to Calumet City, IL to pick up sandwiches from a place called Lincoln's. If you went there at lunchtime, the line was often out of the door. As busy as it was, they had the routine down and could crank out those sandwiches in assembly line fashion.

The place dated back to even a few decades earlier and had been in a couple other locations. There were a few special recipes on the menu with locally inspired names, concocted by the owner, who ran the place with his wife, daughters and additional crew.

This is my dad's favorite. It's the Stromboli - Italian sausage, tomato sauce and green peppers topped with mozzarella on french bread. Very, very good...although dad is disappointed that they've gone from the sausage patties they used to serve to sausage links. I like the patty a little better also, but it's still pretty awesome. 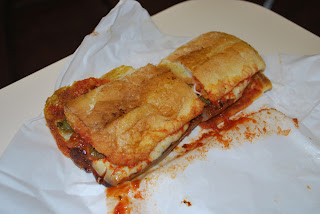 However, I don't order it very often. That's because I have a favorite sandwich on the menu and I order it pretty much every time I stop there. It's the Calumet City special - ham, turkey, bacon, American cheese, tomato, lettuce and mayo on French bread. If I do stray, I usually get the Sibley Special - turkey, bacon, boiled eggs, cheese and lettuce on French Bread. Another sandwich I love is the U.S. Steel, which is roast beef and cheddar on rye. 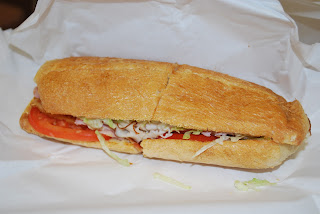 My son isn't much of sandwich eater. He ordered a BLT - hold the lettuce, tomato and mayonnaise. And then he removed the bacon and didn't eat the bread. :) 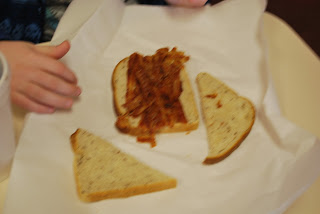 But, he ate all the bacon, so he got to pick a dessert. They have a huge assortment of pies, but this is what he went for: 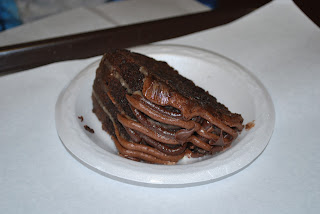