Putting the kids to work in the kitchen

My kids seem to go in phases in so many areas of their lives. For a while, they are into LEGOs and play with them constantly. For a time, everything is about the military and they are dressing in camouflage and staging battles in the back yard. And every once in a while, they decide it's fun to do some cooking. This pic, is from my second son, Chandler's, last cooking phase. He was so into it, I picked up a chef hat for him at Gordon Foods. 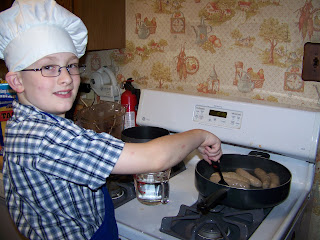 It lasted maybe six months. He was cooking all the time and loving it. But, eventually it faded. The other kids have jumped in and spent time in the kitchen for smaller stints. For a while, we made up a calendar. I have five kids and so one day my then 7-year-old said "Hey, there's 7 of us in this family. That's one night for each person. How about if we all get to cook one night a week?" It sounded pretty good to me. It started off with a bang. I had my boys making roasts or grilling meats and even making pies and cupcakes for dessert. It was pretty cool. Even my youngest, who was five, took turns, but he usually wanted to make his favorite - hot dogs rolled in crescent dough. I could tolerate them on occasion, but not once a week. Slowly, their enthusiasm faded and we went back to the mom-cooks-almost-every-night deal. I'm waiting for the cooking bug to hit one of them again...and if it doesn't happen soon, I might put them to work anyway. :)