What do you put in your chili?

So I was making a pot of chili the other day. My chili is like my soup. Never really the same twice. I'm always throwing in different ingredients or making it in different proportions. Chili is such a comforting meal on a brisk winter day and I make it pretty often during the cooler months.

Ground beef is usually the meat I throw in. Maybe one of these days I'll try out some ground turkey. I'm sure the difference isn't very noticeable when you blend in all the other flavors. I've also used leftover steak, Italian sausage, leftover roast, pork sausage, bacon and chicken.

This time of year, I'm using canned tomatoes. And honestly, even when tomatoes are in season, I often throw in some canned even with the fresh - and usually the preseasoned, diced variety. When I put in fresh, I often use Romas. I always make sure we have them in our garden since there's less of the juice and seeds that you'd get with the larger sandwich tomatoes.

Not everyone in my family likes beans. Sometimes I'll scoop out a little before I add beans and set it aside. But, really? What is chili without beans? Many times I'm lazy and just get cans of preseasoned mild chili beans. I usually throw in at least some kidney beans, too. So many possibilities, though when it comes to the beans.

And while you can really get by with just what's mentioned above. It's the extra little things that really make a difference. I love picking a green pepper right out of the garden and dicing it finely and throwing it in. Makes such a difference. Sometimes I saute it and then add it, but if it's sliced small enough it's not going to take much to cook it and you can throw it in when you brown the beef or immediately after.

And then there's the spices. My stomach can't handle the spicy stuff -- and after being hospitalized twice in my life for tears in my stomach lining that could lead to ulcers, you're advised to stick to the more bland dishes. So, I often make it mild. However, my husband and sons like it spicy, so sometimes after I get a bowl, I throw in some cayenne pepper, red pepper flakes and hot sauce to heat it up for them.

To me, it's not complete until you sprinkle the top with shredded cheese. Sometimes I'll go all out and add a dollop of sour cream, some diced onions and a few oyster crackers.

The best chili I've ever had was when I was stopping by the Calumet City (IL) Fire Department to do a story on a fundraiser they'd done to help the family of a fallen soldier. They'd had his young kids there for the day to inspect all the fire equipment and the firefighters prepared dinner for them. They're an awesome bunch of guys and have some great cooks on their shifts. I sampled the chili -- five meat chili, I believe it was. Wow!!! It. Was. Incredible. I have the recipe and one of these days will have to give it a try.

So, what's your special ingredient? What do you do to add a special touch to your pot of chili? 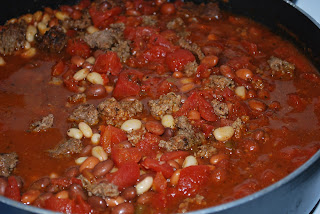