A couple weeks ago, a friend and former co-worker who I haven't seen in years sent me an e-mail. "What are you doing on Wednesday?" She now lives about an hour away, but was going to be in the area for a high school mini-reunion. She'd graduated from the same high school as me...Thornton Township High School, but 30 years earlier. She's always been like another mom to me. I worked alongside her in the district office when I was in the office education program. I was so excited to get to see her. So, I joined her as she met with her classmates and instead of ordering off the menu, the express lunch buffet seemed to have a good selection, so we went with that. It was about $7.50 and you got quite a bit to choose from. I have fond memories of the place. I remember going there with my family as a child. I'm not sure if they still have them, but there were bocce ball courts in the back and I thought it was so much fun to play. After high school, I continued working for the district office...I spend the next 12 years there as an administrative assistant and in that time, I was there several times with co-workers. There were often retirement parties held there in the banquet room. But, it's now been 10 years since I worked there so it's been at least that long since I've eaten a meal there. Also, I always knew the place as Lorenzetti's. The owner's name was Carlo Lorenzetti. So, it's now listed as Carlo's Restaurant online, but if you hear someone mention Lorenzetti's, it's probably the same place. 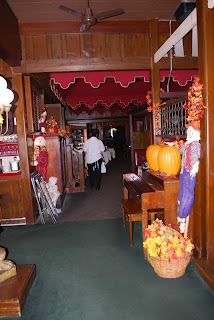 So, back to the buffet. There was a lot of food there to try...and yes, I tried much of it. First, there was soup. It was baked potato soup, which I loaded up with cheese and chives. It was steamy and creamy...just how I like it. Next there was a salad buffet with a nice selection of vegetables and some pasta salad, potato salad and a couple other salad options.

Next were the entrees...fried chicken, pizza, pasta, fish with some side items. Loved the fish! Their pizza has always been a favorite of mine and the chicken was tender and juicy with a crispy crust...chicken perfection in my opinion. 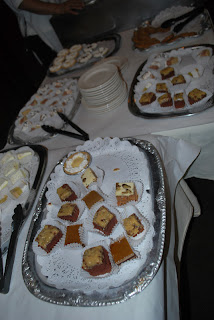 The place was decorated for fall. And after all that sampling, there was still a dessert table to go with various sweets. Nothing knocked my socks off, but it was nice to have some sweets there to choose from to finish off the meal. All in all, it's a great value and the food is way above average for a lunchtime buffet. The place is also warm and inviting with a nostalgic, elegant feel. I made a mental note to get back there for lunch...and not wait another decade to return.