Make your way to Munster's Mishikenut for Mediterranean cuisine

About three years ago, a new eatery popped up in Munster along Ridge Road, right next to a popular burger joint called Schoop's. I was intrigued by the word "Mediterranean" on the sign. I had never been to such a place. I do like lamb and from glancing at a menu, it looked like there were several lamb dishes. I was anxious to try it out.

Once when I was heading out for lunch with my husband I suggested it. We ended up at Hooter's.
My adventurous foodie sister was visiting earlier this year when we were heading to a movie together. We also wanted to get a bite to eat, but time ran short and we didn't make it Mishekenut, but grabbed a rueben at Foodie's MarketCafe in Dyer. My dad lives right down the street from the restaurant and for quite some time, I've been bugging him to go there with me. However, he is pretty much the opposite of adventurous. He knows what he likes and he chooses not to stray from those familiar dishes. Mention the word hummus and he'd make a face like a 5-year-old being offered brussel sprouts or spinach. Not that he'd ever even tried it. He just didn't like the sound of it.

So, I've since been on the hunt for someone to accompany me there for a meal. And I did - my friend, Michelle. We get together on occasion for breakfast or lunch and ever since I mentioned it to her, she has been as eager as me to try it out. She, on the other hand, was pretty familiar with the menu and has eaten Mediterranean food in the past.

So, finally the two of us made it there and we had a belated birthday lunch for Michelle's birthday, which was last month.

So, as we opened the menu, we first set our sights on the appetizers. I wanted to try out as many as possible, so we ordered a bunch of appetizers and called it a day (even if it did take us a half hour to completely make up our minds.)

Michelle recomended the Baba Ghanouj - a pureed eggplant with tahini, lemon and garlic. I also detected a bit of heat...turned out that dash of green was a jalapeno sauce. It was served with warmed pita bread. Wow! And look at all that olive oil splattered on top. 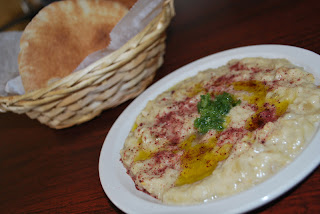 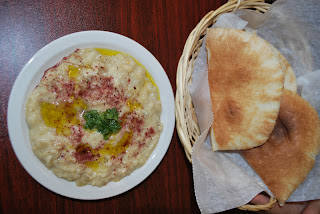 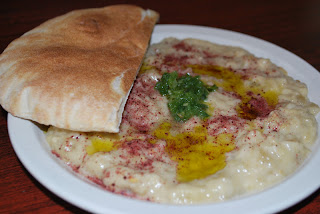 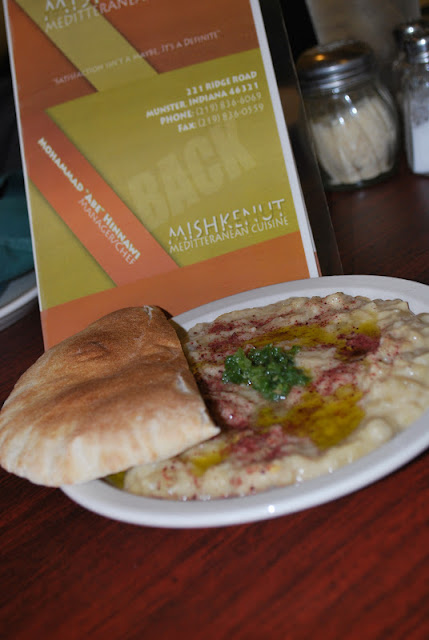 We also decided to try the falafel. The sound of fried chick peas didn't fighten me like it did my dad. At first, I noticed the striking resemblance to hush puppies. :) These were superb...golden brown and served with a tahini sauce. 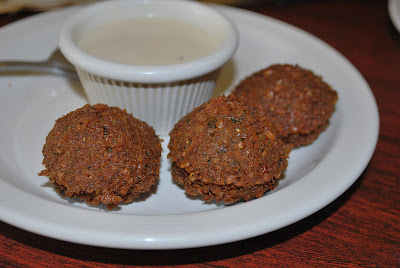 Then, rather than order entrees, we went with the Mishkenut Sampler, which allows you to choose two or three of the following: fried kibbeh, grape leaves, prune rolls and spinach pie. We opted to leave out the prune rolls. 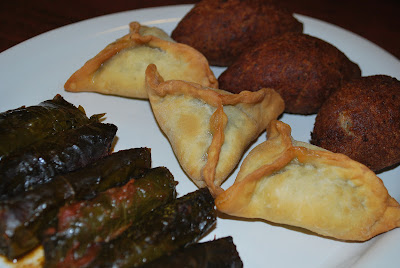 The grape leaves were fantastic. I was trying to figure out a way to work a little lamb into the meal without ordering a huge entree and this hit the spot - grape leaves with a lamb and rice filling. 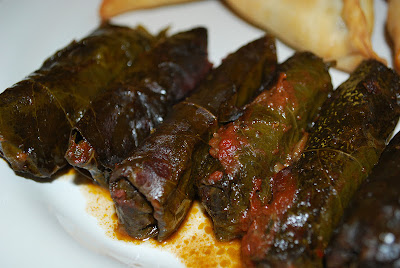 The spinach pie caught me a a little off guard. For some reason, I was expecting a spinach and ricotta filling, but it turned out to be spinach and lemon inside, which threw me off, but pleased me, too. 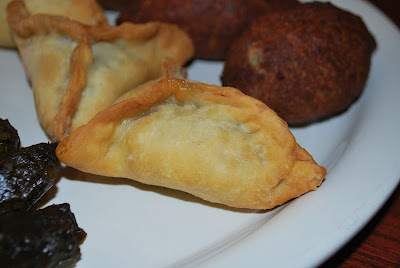 This was the fried kibbeh, something I hadn't even heard of before. It was ground beef, onions and pine nuts covered in a cracked wheat coating. 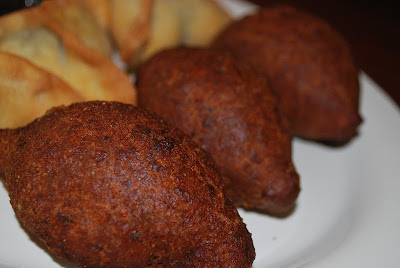 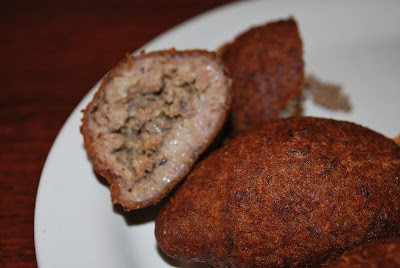 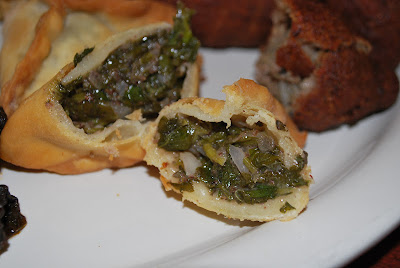 And as our bill was being totalled, I commented that I really wanted something sweet, but not something huge and super rich. It made my day when the bill was brought, accompanied by these. Dark chocolate covered almonds....homemade right there. 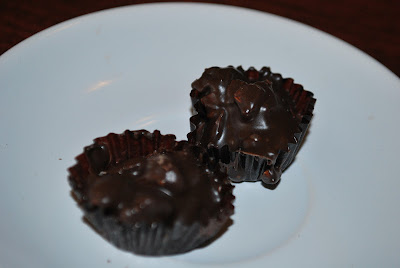 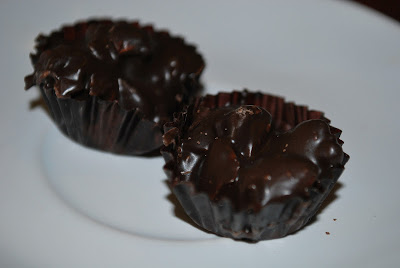 I enjoyed everything we tried out and there's nothing I had that I wouldn't order again. On the next visit, I'd really like to try some of the salads or perhaps a sandwich.

I love the story behind the place. The charming young man who waited on us chatted with us about the place. Turned out he was the owner's son. His sister was also hard at work in the kitchen. Turns out that his dad, Abe Hinnawi, worked in his uncle's restaurant in West Jerusalem in the 1970's. The customer base included government officers and celebrities. He even waited on Gerald Ford and Carol O'Connor when he worked there. His dream was always to open his own place and that's just what he did. His son said that there may even be another location opening in the future in the west suburbs.

He explained that his father is currently out of the country. Why? It's olive picking season. I love hearing great stories like this in these small family owned places. The family owns land in Jerusalem and they go there to press their own olive oil and ship it back to be used in the restaurant. He talked about the tedious season he spent there picking olives with his relatives. They also sell the bottled olive oil in the store - $11.99 for a 12-ounce bottle.

Some of the other menu items are lamb shanks, shawerma, smoked salmon, lasagna, kabobs, veal medallions with tomatoes and olives. I'm looking forward to returning soon to try out more new dishes!