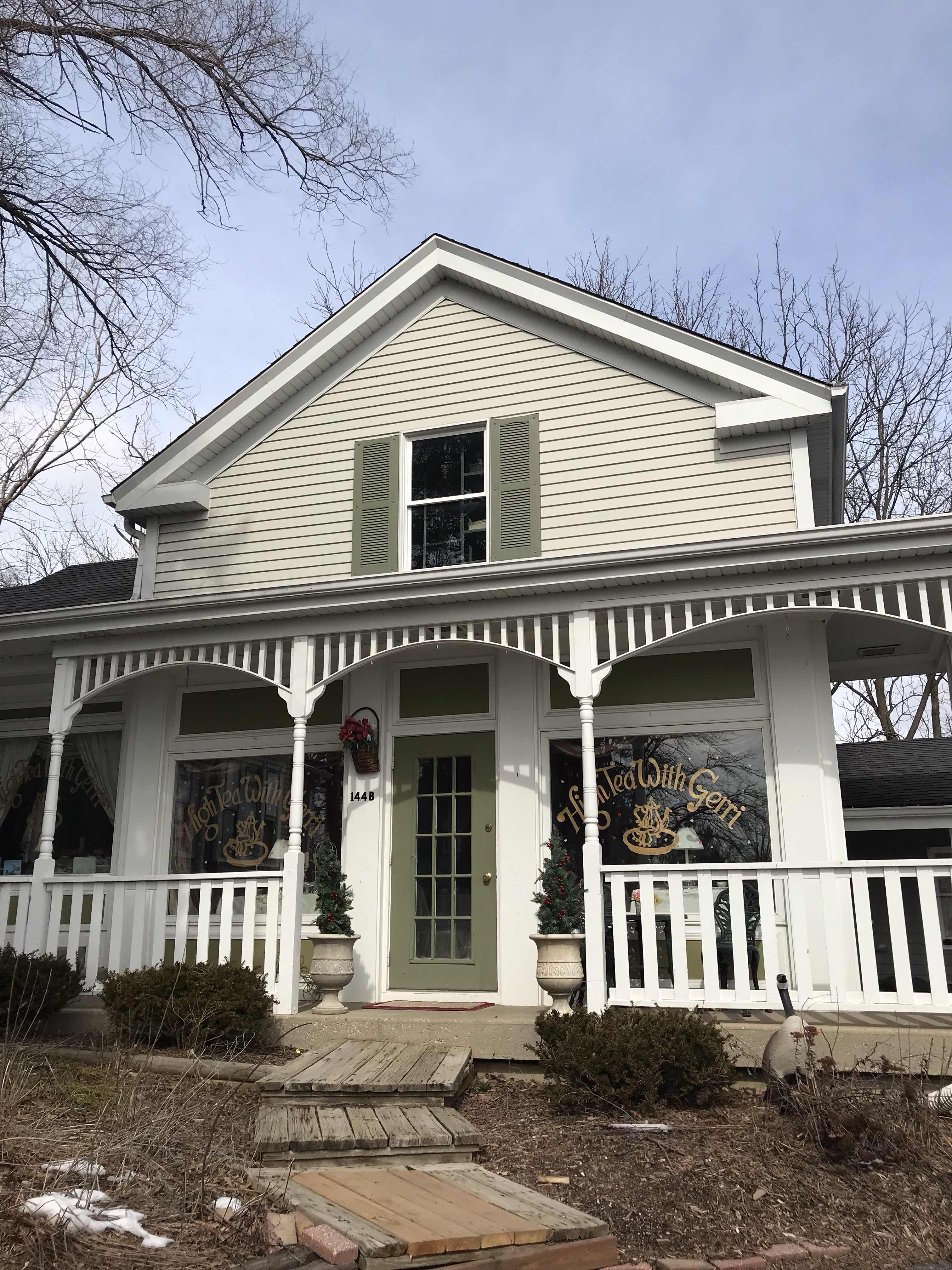 I think this year’s Valentine’s Day date will go down as the best ever. It didn’t even happen on Valentine’s Day. Parent teacher conferences were scheduled that day (it had to be a single person who planned that - LOL), so we had to pick an alternate day to do something special.

We checked our calendar and it was a couple weeks later when we set a date where we could spend the whole day together. Hubby told me he was making plans - that in itself was really special. I’m usually the planner and the one coordinating things and making reservations. Then he told me it was a surprise. I love surprises and was glad that he didn’t spill the beans before the date. 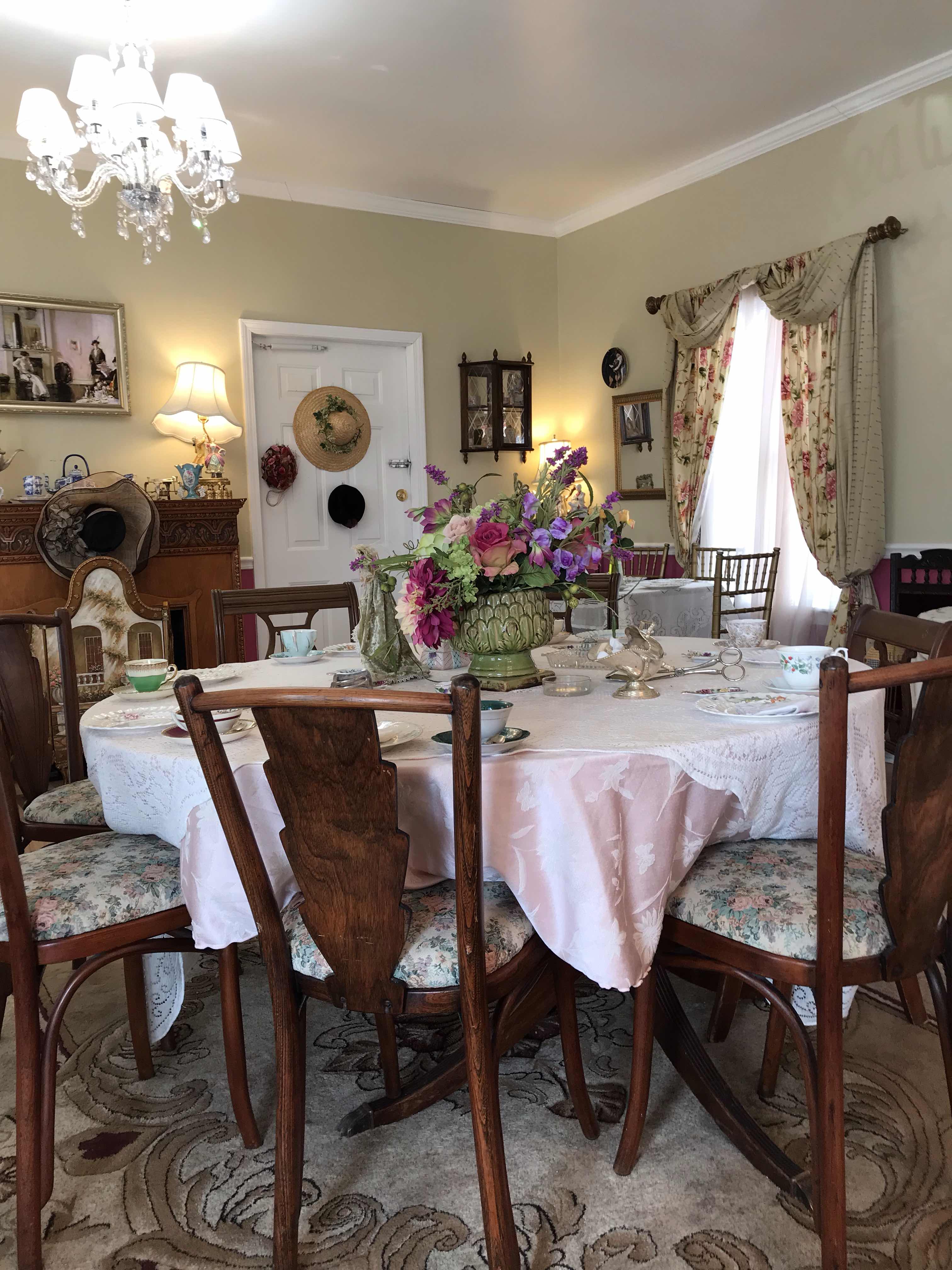 We set out late in the morning. All he told me was that it was an hour away and that food was involved. I really had no idea at all. Even as we drove, I glanced out the window noticing that we were on I-294 and then I-290 and then Rt. 53. I still had no clue. It wasn’t until we were a couple minutes away that I caught a street sign that said “Long Grove” on it. 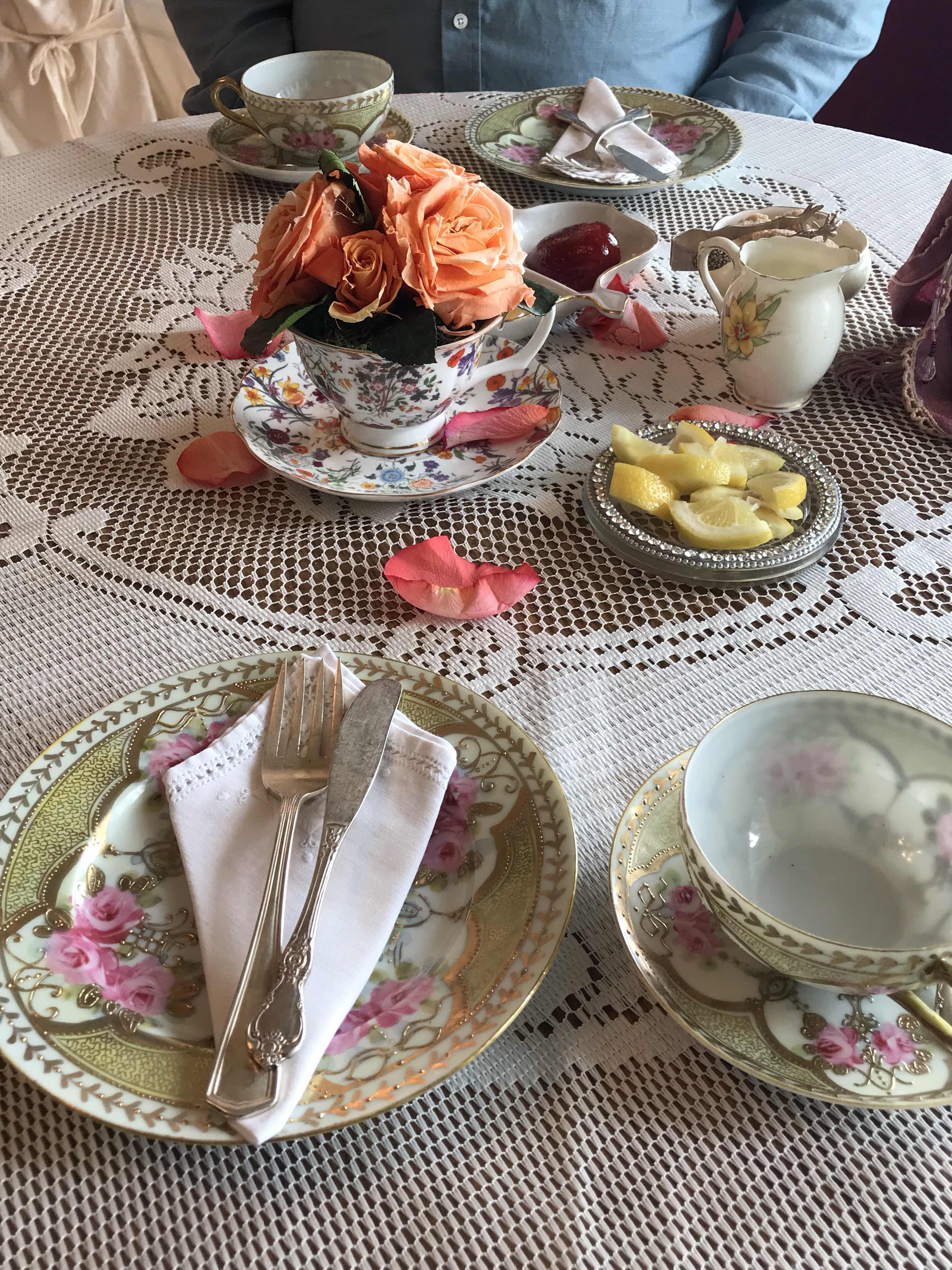 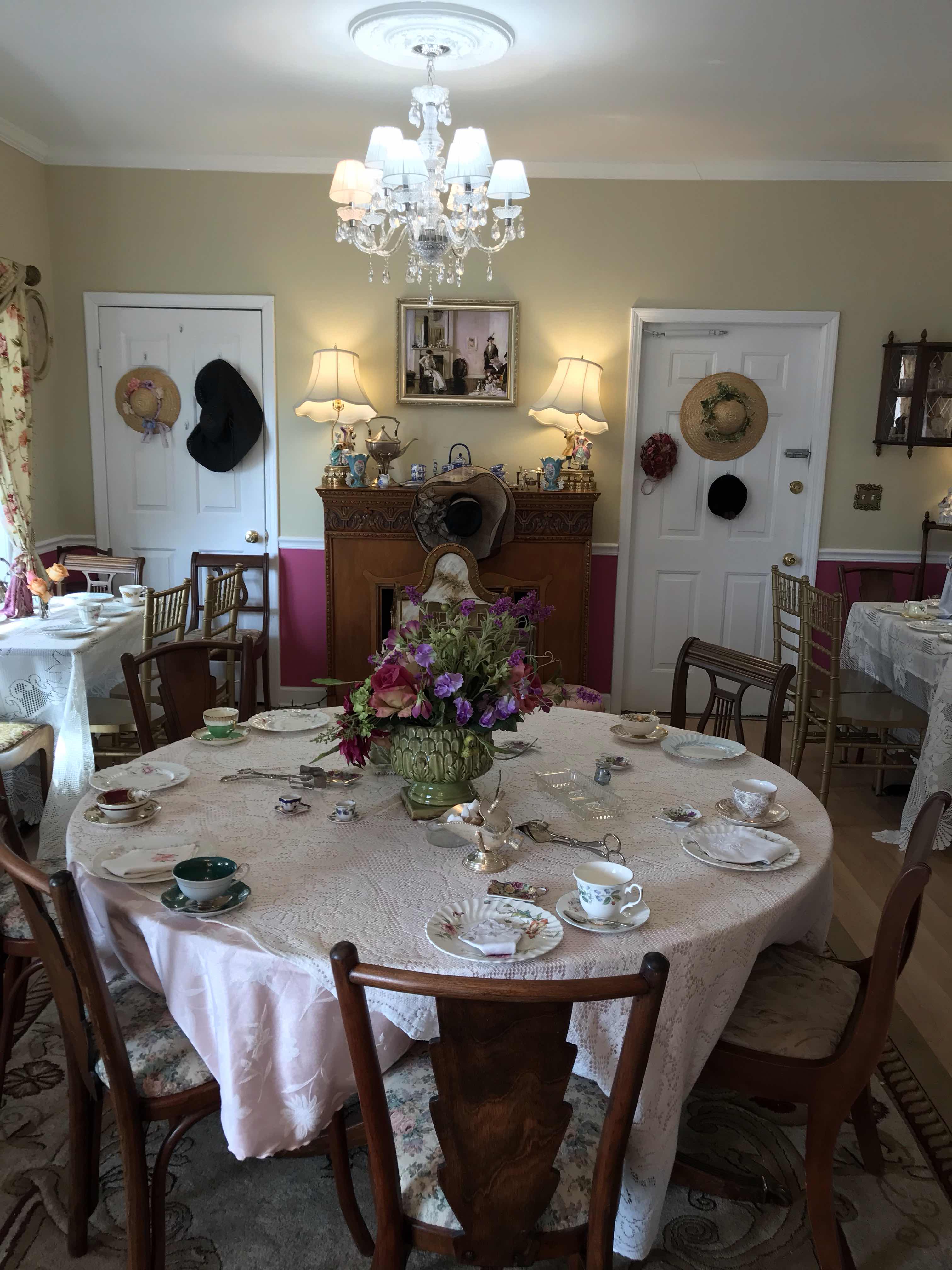 I immediately started to tear up. Long Grove has a special place in my heart and played such a memorable and sentimental role in my childhood. Each year - I think around Mother’s Day, my older sister and my two sisters-in-law and my mom would go up there for a girls’ day out to go shopping in the charming shoppes of this historical downtown. Once I got old enough - around age 8 or so - I also got to tag along.

We’d spend the day going from place to place. We’d have lunch at a little Italian spot. We’d go to the creamery for ice cream. We’d browse the clothing boutiques and the kitchen store and the gift shoppes. And we’d always stop in the Long Grove Confectionary for chocolate covered strawberries. We’d end the day by meeting up at the Village Tavern where we’d sit by the fireplace and enjoy a sandwich or a burger and show everyone what we bought. I’ve told my husband, Paul, a few times what fond memories I had of Long Grove. So, when I realized that’s where we were going, I got a bit emotional.

The fact that we were going to Long Grove wasn’t the only surprise. He pulled into a little parking lot and I was floored when I looked at the name of the place painted on the window - High Tea with Gerri. I LOVE high tea and was so surprised. It turned out that he had messaged my sister and asked if she remembered where we used to eat lunch when we would visit Long Grove. She didn’t, but she did point him toward the tea room.

So we had a 1:00 reservation on a Saturday afternoon. The place was empty when we arrived and we were greeted by Gerri, the owner, who has been specializing in tea parties for many years. First she did them in private homes and then she started hosting them in her own home. She started her business in Long Grove seven years ago. Gerri was dressed in a long, lacy Victorian dress and led us to our table. 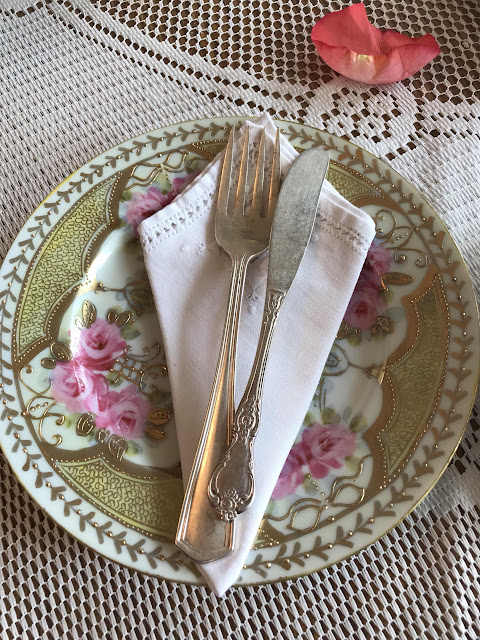 My husband actually had no idea what high tea was and after giving him a brief explanation, I broke the news to him that he’d probably be the only guy in the place. Even so, he really enjoyed the dainty finger sandwiches, scones and bite-size desserts. 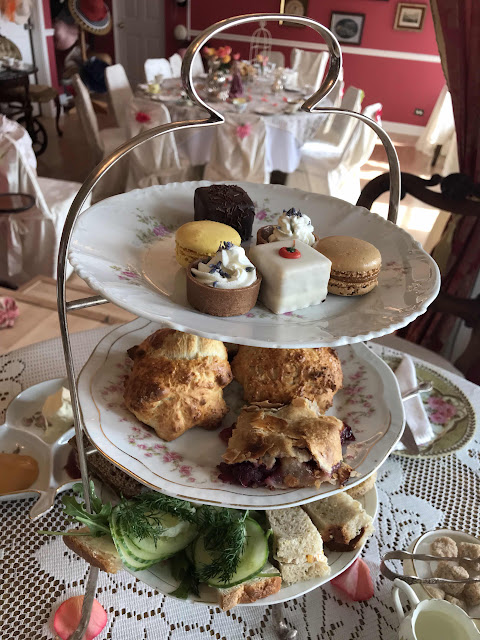 There are three choices on the online menu - a four-course traditional tea menu, an Emperor's six-course high-tea and a children’s menu. She also does a lot of bridal and baby showers - and other events - both on-site and at other venues. 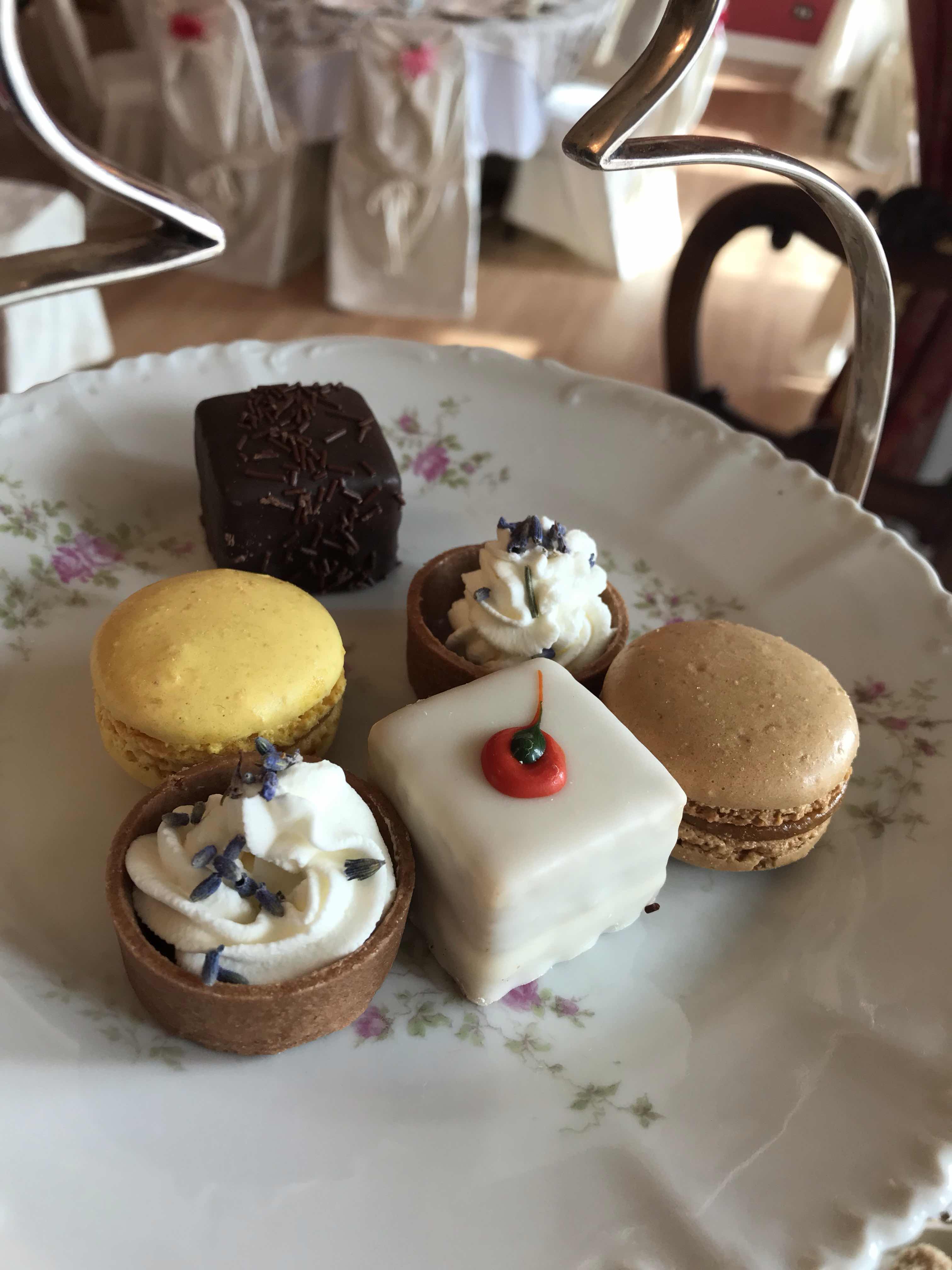 We had the four-course traditional tea menu, which came with eight different sandwiches. A full list can be found at htwg.net. My favorites were the egg salad rounds, the beef tenderloin triangles with fresh lemon basil mayonnasie & arugula on light rye and the cucumber & watercress leaves with fresh dill cream cheese on light white bread. I love cucumber sandwiches — and no matter how many times I try to make them at home they just never measure up to those I’ve had in tea rooms. 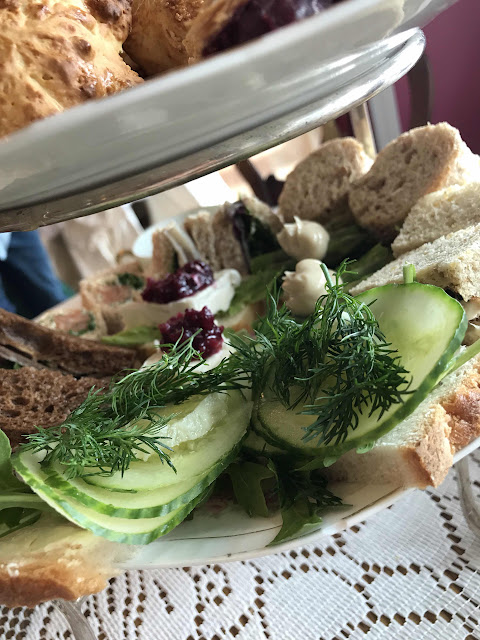 Of course, we sipped on Gerri’s special blend of Earl Gray tea with each course, dropping in little sugar cubes to sweeten it up a little bit. 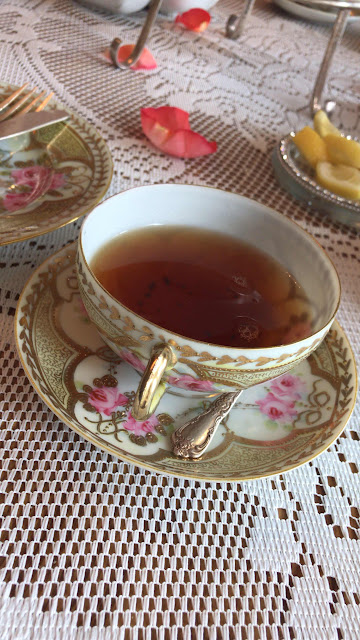 The next course was raisin scones right out of the oven with clotted cream, lemon curd and strawberry jam (WOW!) along with homemade apple rhubarb pie. The top tier had a number of petit fours and dainty desserts - one with edible lavender. 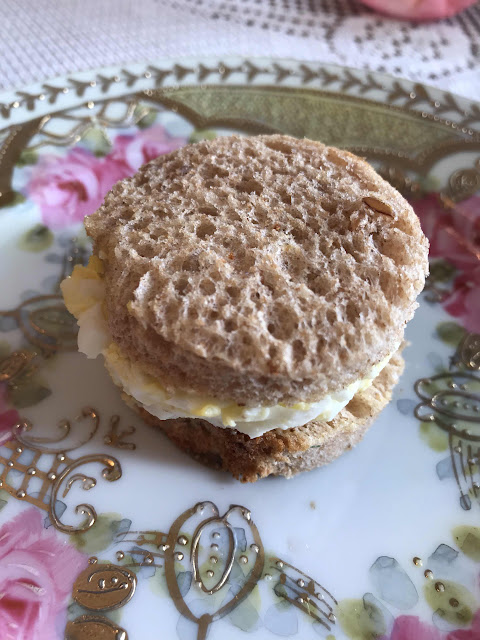 Gerri is from Ireland and has been in the states since 1984. She’s appeared on WGN Morning News, so look up the video if you want to get a closer look at the place. 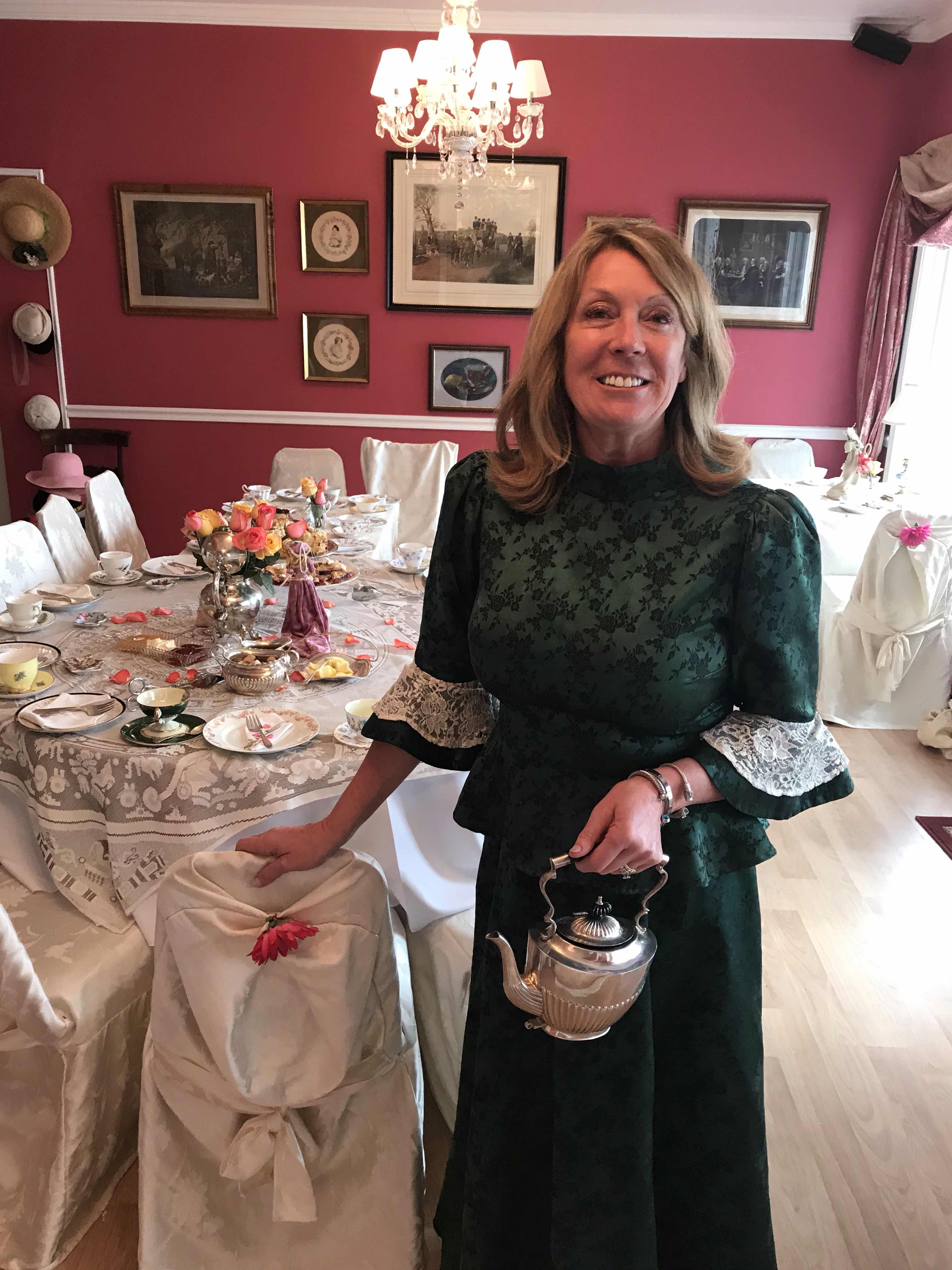 After I told hubby he would likely be the only male there, another couple walked in. He let out a sigh of relief and said, “Good, I’m not the only dude here.” We chatted a little with the adorable couple, Charlie and Heather - enough to know that it was a late birthday celebration for her. We chatted a little about where they were from and about jobs. And it felt much more relaxed as we chatted. As we were heading out, a group of 16 moms and 10-year-old girls were being seated. And being a dad of five sons who isn’t used to being around giddy girls, he appreciated the timing of their arrival with our departure. Other than Charlie and Heather, we had been the only ones there and it was very quiet and tranquil. 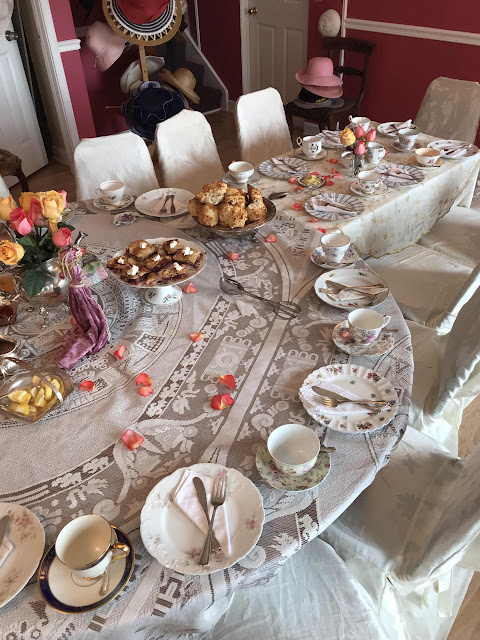 The place is beautifully decorated in Victorian style - from the tableclothes to the furniture to the teacups to the artwork. There are hats you can wear as you sip your tea if you’d like. I can just imagine how much fun my mom and sister would have had if this place had been there on our trips to Long Grove back in the 1980s. 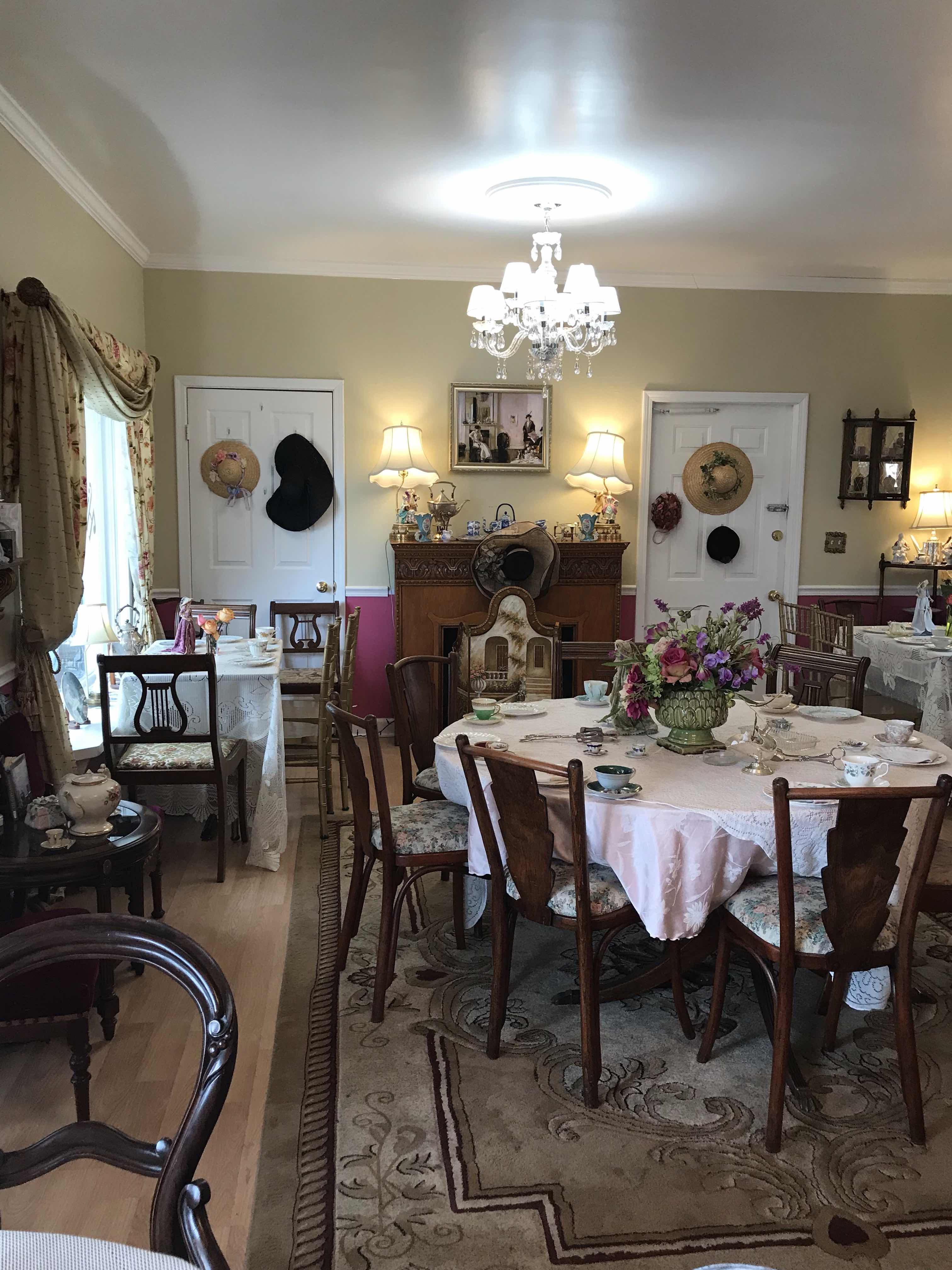 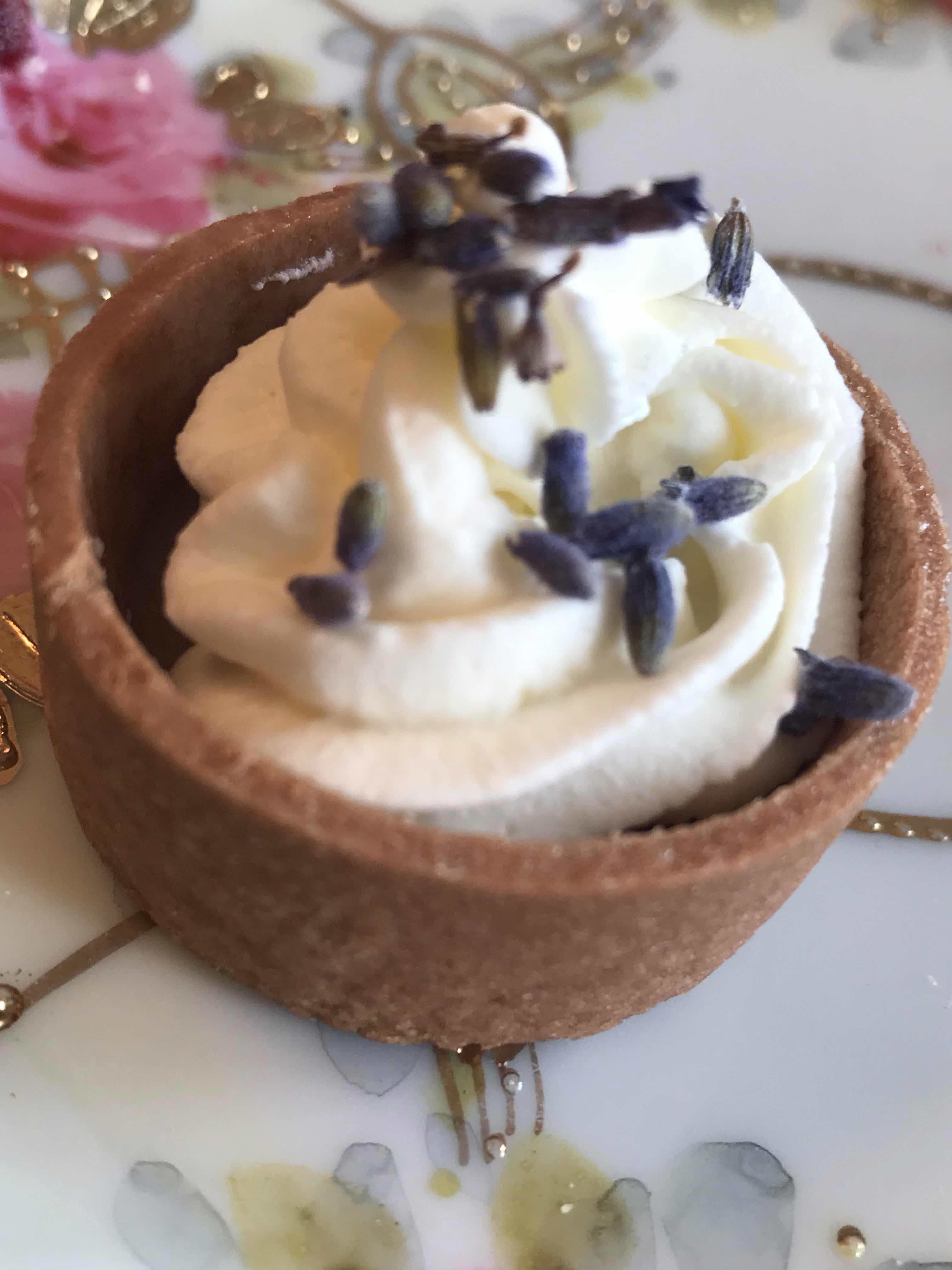 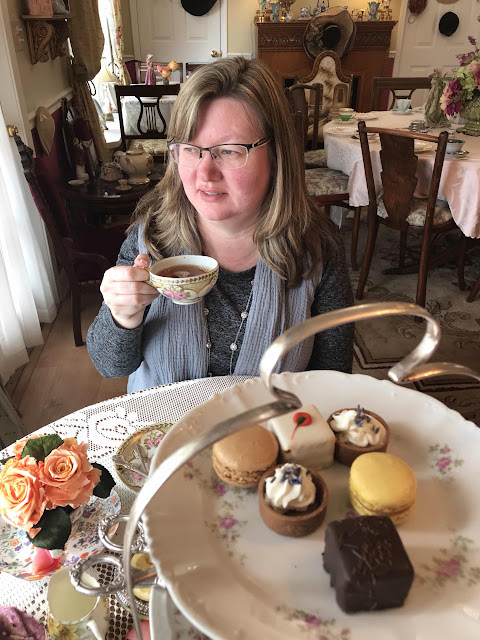 I couldn’t have loved my day more. It was a wonderful surprise to a meaningful little town and the high tea was just the icing on the cake. I’d recommend it to any mother/daughter duo or for sisters or girlfriends for a nice afternoon - or even for a couple to celebrate a special event. I know this will go down as one of our most memorable dates. After 27 years married and 31 years together, I guess I’ll keep him.

If you’ve never been to Long Grove, its lovely historic downtown is full of quaint shops and makes a great destination for a day trip for those in the Chicago area, SE Wisconsin or NW Indiana. Be sure to call ahead for reservations if you’d like to stop for tea service.