From the Inbox: Chicago included in Gelato Festival America Tour

Just a bit of foodie news worth sharing. Sounds like a delicious event! Get your tickets early at a discount!

I SCREAM, YOU SCREAM, WE ALL SCREAM FORŠ GELATO!
THE SECOND EDITION OF GELATO FESTIVAL AMERICA BRINGS ALL THE GELATO YOU CAN EAT IN ONE DAY! FIRST STOP ‹ JERSEY CITY!
THE 2018 EDITION OF TUSCANY¹S GELATO FESTIVAL RETURNS TO AMERICA,
BRINGING ITALY¹S RICH HERITAGE OF ARTISAN GELATO TO EIGHT US CITIES
FROM AUGUST THROUGH OCTOBER

PHOENIX, AZ. (July 2, 2018) After the great success of last year¹s first edition, Gelato Festival America kicks off its second American tour on August 11 in Jersey City, with twice as many locations. The Gelato Festival will spread awareness of real Italian artisanal gelato through a contest in which gelato artisans and chefs will compete with original gelato flavors they have created for the event. Tropical Blast, Spicy Green Paradise, Sicily Orange Sunrise and Fresh Love were just a few of the flavors invented last year. Be the first to discover this year¹s new creations!
Carpigiani and Sigep-Italian Exhibition Group are the festival¹s strategic partners. 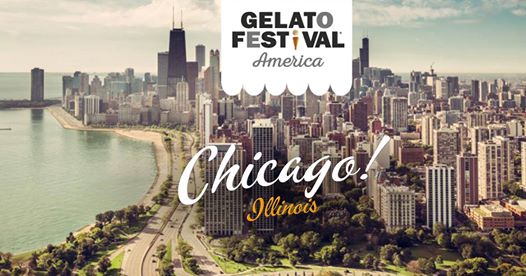 Ticket holders gain full access to Gelato Festival America for one day at the location for which they purchase tickets. Tickets are $30 for adults, $25 for seniors (65+), $25 for kids (3 to 12 years old), and free for children under two years old. Those who purchase tickets for the Gelato Festival online in advance receive a discounted price: $25 for adults and $20 for seniors and kids (must show ID at the gate!). The all-access ticket will allow them to enjoy a scoop of each of the unique flavors created by the competing gelato chefs, the sponsored flavors, and flavors from Carpigiani's Gelato University. Ticket holders will be able to vote for their favorite competing gelato flavor, helping to decide the winner for each city. Their voting will comprise 50% of the decision; the rest is in the hands of the technical jury, who will judge the gelato based on presentation, flavor, and structure. Presale tickets can be found online at gelatofestivalamerica.com/ticket and on Eventbrite. Tickets will be sold at each venue as well. 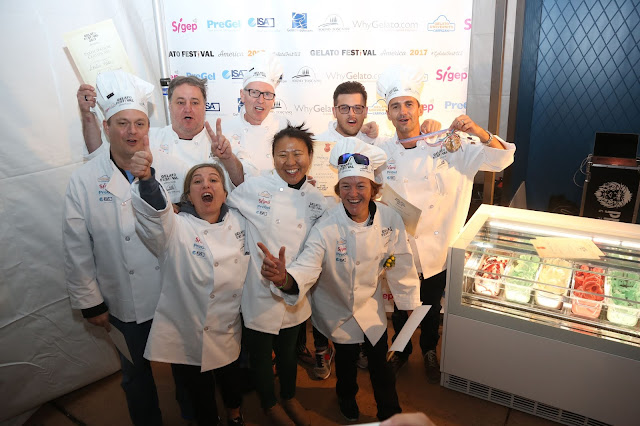 The ticket is an all-access pass to all of the activities and reserved events of Gelato Festival America 2018, listed below.

·       Attend the Gelato School, where award-winning gelato artisans and experts will share what it takes to be a gelato chef and professional
·       Participate in the Gelato Eating Contest, where the five people to eat five cups of gelato the fastest will win a gallon of gelato!
·       Serve on the Kid¹s Jury, where children have the opportunity to question the chefs and vote for their favorite flavor. Know a young foodie who might be interested? Email info@gelatofestivalamerica.com 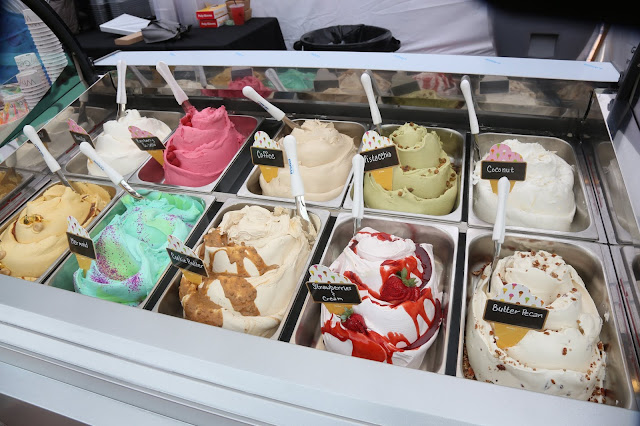 Last year, 50 gelato makers competed with unique gelato flavors to produce over 13,500 pounds of gelato to the delight of over 40,000 visitors and 150 gelato professionals who were present at the Festival in 2017. With the growth of Gelato Festival America, over 100,000 people are expected to attend the 2018 edition. 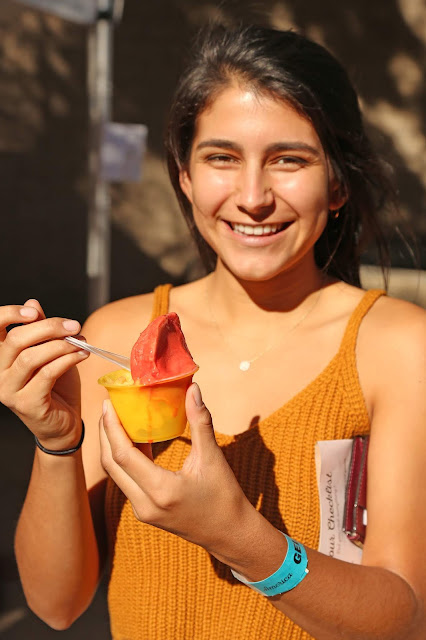 This year, the Festival will tour eight cities in the US including:

In the United States, the purpose of the Gelato Festival runs much deeper than just the taste bud-tingling flavor combinations found only in artisan Italian gelato and sorbet. Gelato Festival America is reflective of the boom of Italian style and culture in the United States in fashion, film, music, and food ‹ Versace, Call Me By Your Name, Andrea Bocelli, and, of course, gelato. According to Daniele Palazzoni, General Manager of Gelato Festival America, ³After the huge success all over Europe, and our first edition of the Gelato Festival in the USA in 2017, we realize that Americans really do love gelato ‹ maybe even more than ice cream. It is our goal to make certain that every American gets to taste what real Italian gelato is like and to spread the culture of artisan Italian gelato throughout the world¹s largest consumer market for frozen desserts, focusing on the higher quality of this product compared to all others. Together, with the best gelato industry players, we will help artisans and chefs build their own successes in the United States market. With more stops on our tour over the next years, we will be visiting a city near you, obviously with the best gelato ever.²

Artisans and chefs will go through a rigorous selection process to compete in each city with a unique flavor specifically conceived for Gelato Festival America. The winners will then compete in an American grand finale. Ultimately, the remaining 36 competitors will vie for the title of World Champion in the Gelato Festival World Masters Final in Italy in 2021.

ABOUT ITALIAN GELATO
When visiting amazing, culturally rich cities like Florence and Rome, there is one treat sold on almost every corner ‹ authentic Italian gelato. Gelato¹s heritage dates all the way back to 1559, in the Italian Renaissance, when the Medici family commissioned famous artist and architect Bernardo Buontalenti to prepare an opulent feast for the visiting king of Spain. For the special occasion, Buontalenti created a new frozen dessert, made from a few simple ingredients such as milk, eggs and honey. And thus the first gelato was created, and Buontalenti is now heralded as the inventor of this creamy Italian dessert. To discover more about the history of gelato visit the Gelato Museum (gelatomuseum.com) in Bologna.

Americans often wonder what the difference is between ice cream and gelato. The main difference is texture! The gelato¹s lighter texture comes from using more milk than cream, which also means less fat and fewer calories. It is stored at warmer temperatures, increasing the richness of the flavors and ensuring a smooth texture. Of course, there are also artisanal ice cream makers who also work every day to create fresh products in a unique American tradition.

ABOUT THE GELATO FESTIVAL
Since 2010, the Gelato Festival has had nine editions with more than 2,200 artisans competing in 64 festivals across Europe, traveling almost 30,000 miles. The mission of Gelato Festival America is to spread the culture of artisan Italian gelato in the US. Originating in Florence, Italy, Gelato Festival is an all-star line up of the biggest names in gelato artistry competing against one another with a one-time flavor they have created just for the festival. The event gives visitors the opportunity to experience the secrets of high-quality gelato, learn about the production techniques by watching the artisans at work in the Œlaboratory,¹ and taste all the competing flavors, voting for their favorite one.

Over the next three years, there will be 22 festivals and two American finals. In the end, the best three gelato chefs from the US will be selected to participate in the Gelato Festival World Masters Worldwide Finals in Italy in 2021.

The Gelato Festival is picking up where Renaissance artist Bernardo Buontalenti left off, spreading the culture of artisan Italian gelato throughout the world!

Thanks to the partners and sponsors of Gelato Festival America:
Strategic Partner: Carpigiani ‹ Carpigiani Corporation has been serving the foodservice market since 1946, as the leading manufacturer of gelato equipment in the world. In the US Carpigiani hosts the Frozen Dessert University, providing unparalleled professional education on frozen desserts for future gelato entrepreneurs. In 2012, they founded the Gelato Museum, one of the ³coolest² museums in the world, dedicated to the history of gelato.
For more information, visit carpigiani.com/usa, frozendessertuniversity.com, gelatouniversity.com/usa, gelatomuseum.com
Gelato World Tour ‹ Launched in May 2013, this international event, whose second edition culminated in the September 2017 Grand Finale, was created to spread the culture of gelato to the general public throughout the world. Starting in 2018, Gelato World Tour is a partner of Gelato Festival World Masters. For more information, visit gelatoworldtour.com
Strategic Partner: Sigep Italian Exhibition Group ‹ Sigep is the International Trade Show of Artisan Gelato, Pastry, Bakery and the Coffee World of Italian Exhibition Group. Next edition: Rimini Expo Centre, from 19th to 23rd of January 2019. The event has undisputed international leadership as the trade fair for professional operators all over the world. For more information, visit en.sigep.it
Main Sponsor: PreGel America ‹ PreGel America is a global developer, manufacturer, and distributor of specialty dessert ingredients, with North American headquarters in Charlotte, NC, and official supplier of gelato ingredients for Gelato Festival America. For more information, visit pregelamerica.com
Main Sponsor: WhyGelato.com ‹ WhyGelato.com is a gelato-inspired web resource created to spread the culture of gelato throughout the U.S. via consumer education and support of entrepreneurship in gelato-based specialty desserts. For more information, visit whygelato.com
Technical Sponsor: ISA ‹ Isa was founded in Umbria, in the heart of Italy, in 1963 and produces refrigerated display cabinets and custom furnishings for public premises in both its region and worldwide. It has established itself in professional refrigeration offering innovative products with the highest technology and reliability. For more information, visit isaitaly.com
Toscana Promozione Turistica Agency ‹ The Tuscany Regional Government Agency is responsible for promoting tourism. Its main objective is to contribute to the promotion of tourism throughout the region, thus consolidating Tuscany¹s presence in traditional markets and developing it in emerging markets. Toscana Promozione Turistica Agency will be the strategic partner of Gelato Festival America in Washington DC. Alberto Peruzzini, Managing Director of Toscana Promozione, explains: ³Gelato is one of the most iconic experiences of what is the true Tuscan style, made with elegant simplicity, creativity and love for details. 2018 is the year of Italian and Tuscan food in the world and gelato is one of the most important ambassadors of our gastronomic tradition. It is a symbol of the Tuscan lifestyle that is so loved by American travelers who today represent our second largest tourist market. This is why Toscana Promozione Turistica is today one of the main partners of Gelato Festival America.² For more information, visit toscanapromozione.it
Packaging Sponsor: Cartoprint ‹ Since 1939 Cartoprint has been a leader in the ice cream packaging market. For more information, visitcartoprint.com
Sponsor: Paolo Penko ‹ The creator of the Gelato Festival gold-plated Medals. An Italian jeweler who creates unique handcrafted designs that connect with rich Italian culture. His shop is located in Florence, Italy, a few steps from the Duomo. He works with his wife and his son to create jewelry in accordance with the ancient techniques of the Florentine goldsmith tradition. For more information, visit paolopenko.com
Official Radio: iHeartRadio ­ is a free, all-in-one streaming radio and digital music service with thousands of radio stations across every genre. For more information, visit iheart.com
Sogno Toscano - Sogno Toscano imports authentic Italian olive oil and other 100% natural Italian cooking products direct to the U.S. from its homonymous farm in Bolgheri, Tuscany. For more information, visit sognotoscano.com