Bye, beans. See you in a few hours.

This morning I came across a recipe on my Facebook page for baked beans. It called for 3 cans of pork and bean, crispy bacon with drippings, brown mustard, ketchup and brown sugar.

So, I looked in the cabinet and had only one can of beans, so I had to reduce the measurements and I added a few other things that seems like they'd work well. Here's my modified recipe:

So, why'd I change it up? I don't know. Just because I like to experiment. I added the other stuff in small amounts -- perhaps enough to give a hint of that flavor, but not enough to ruin it if it doesn't work. Onions just seem to go well in baked beans, so I threw them in. The steak sauce was staring me in the face when I reached for the ketchup. Honey? I figured it would thicken the sauce a little and add a little sweetness to it? Bacon bits and bacon? Is it overkill? Bacon, like chocolate, is one of those things that just makes everything better. No such thing as too much bacon!

When I got it all in the crock pot, I looked back at the recipe and ooppps!! It wasn't a crock pot recipe. It was for the oven. Oh, well. No biggie. I'll put in on low for two or three hours and see what I have. :) 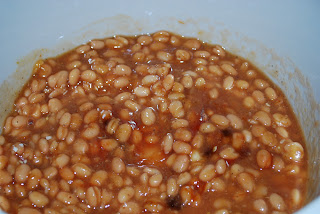