I'd kind of given up on the garden. The tomatoes seemed to be done for the year and the sunflowers had drooped and been destroyed by the neighborhood squirrels. I'd forgotten we still had peppers on the plants until my husband reminded me this week. So, I used them for some stuffed peppers. 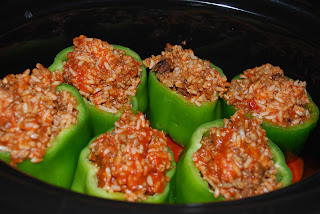 I learned to make these from my former co-worker, Jeanine DesJardins, who enlightened me to how easy they are to make. Her basic recipe called for 6 green peppers, cleaned and boiled. Then in a pan you brown a pound of ground beef and then drain and add about 3/4 of a jar of pasta sauce and about 2 cups of cooked rice. Stir and stuff the peppers and place them in a baking dish. Top with remaining pasta sauce and bake for about a half hour.
As I've made it over the year, I usually add some spices to the browning meat and sometimes dice up some green pepper and onion to add to the beef mixture. Sometimes I put some shredded cheese on top for the last five minutes of so of cooking just to melt it.
Jeanine always encouraged me to make a double batch of the meat mixture and make stuffed cabbage along with it. Then all you have to do is just boil a head of cabbage, remove the leaves, fill, roll, place in a casserole dish and top with a little extra sauce and bake for about 20 - 30 minutes.
This time, I found I could make the green peppers in an even easier way, eliminating the need to boil the peppers. I made the filling and placed it in raw peppers and then put it in the crock pot. I put a little sauce on the bottom to keep it from sticking. I put it on high for about 3 hours, then another hour or so on low. Perfect!!