I was in my mid-teens before I discovered German food. My family is of English/Scottish/Irish descent with a little Native American Indian thrown in. I didn't know what German food was like until I started dating a guy whose father was a native of Berlin. His mom made a few German dishes once in a while that I tried. And we went to eat frequently at a wonderful German restaurant in Elmhurst called the Heidelberg where I discovered Weiner Schnitzel, Kassler Rippchen and Sauerbraten. I had saurkraut, red cabbage and German fried potatoes on the side. I had black forest cake for dessert. And a tried sips of Hoffbrau and Spaten from the legal drinkers at the table. Upstairs was a deli where we'd get German rye bread, sausage and beverages to take home.

Sadly, the Heidelberg closed many years ago. Since then I've gotten my German fix at Rosemarie's in Lansing, which then became the White Rose Inn and then closed several years ago and at Berghoff's in Chicago and the Peotone Bierstube and House of Gerhard in Kenosha.

Schnitzel is my favorite German specialty. I've never made it myself, but may have to try. I picked up some schnitzel from Aldi, which wasn't too bad and served it with some spaetzle and potato pancakes. However, it leaves me just wanting some really good schnitzel...so I'm going to have to either learn to make my own from scratch or plan a visit to one of my favorite restaurants. 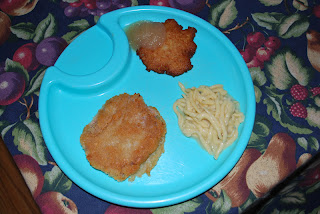