So, towards the middle of the month, when everyone will be thinking about Irish cuisine, Longitud315 in Highwood will be spicing things up with the tastes of Columbia. And if you want to not just eat succulent South American specialties, but learn a little more about how to prepare them, you can participate in the lunch & learn, as well.

HIGHWOOD, IL (MARCH 13, 14 & 16, 2016) – Longitud315, celebrated South American fusion restaurant in Highwood, IL, is welcoming guest Chef Santiago Romero of the famous Harry Sasson restaurant in Cartegena, Colombia to cook side-by-side with Executive Chef Tony Castillo for two special nights and a lunch & learn, honoring Colombian cuisine while raising funds for youth education in Colombia. The public is invited to join the dynamic duo as they cook up a menu of their very own dishes from each restaurant on March 14th and 16th at 7pm, or participate in a lunch & learn on Sunday March 13that 11am.
As Executive Chef for Harry Sasson restaurant, one of the Best 50 Restaurants in Latin America, Chef Romero also worked for world-renowned Peruvian chef Gaston Acurio, owner of Tanta in Chicago and 32 other restaurants in 12 countries around the world.
“It is such an honor that Chef Romero has chosen to come to America and cook with me at Longitud315,” says Castillo. “To be able to share his experience and recipes with my customers is like a dream come true.”

It is Castillo’s mission to take a sabbatical every year to explore different parts of South America in search of authentic flavors and cooking techniques to bring back to Longitud315. Last year he met the Quechua peopleof Cuzco, Peru. This year he closed his restaurant for two weeks in January and took off for Cartagena, Colombia, where he met Chef Romero. He was delighted Chef Romero accepted his invitation to come to America to cook with him and showcase his unique Colombian cuisine to the delight of his diners.

Chef Romero is also looking forward to cooking side-by-side with Chef Tony. “I saw such excellence and passion in Chef Tony’s desire to want to absorb the Colombian culture and cuisine and bring true authentic recipes that I could not pass up the opportunity to join him at Longitud315 and cook for his customers,” says Chef Romero. 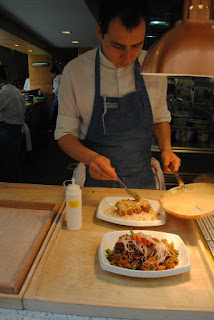 It was Chef Romero who shared stories with Castillo of Colombian communities in need of youth education resources.Castillo is hoping to give back to the community that has taught him so much and has decided to donate a portion of the proceeds from the dining extravaganzas at Longitud315 to develop youth education in Colombia, and provide improved resources to help young students.
Longitud315 promises a once in a lifetime dining experience with a lunch & learn on Sunday, March 13thand two dinner seatings on Monday, March 14th and Wednesday, March 16th. Both chefs will be cooking their favorite Colombian dishes as Castillo presents his new Spring menu inspired by his trip and experience. Featured dishes will include Bandeja Paisa, a common staple in Colombia, and Ajiaco, a delicious soup only made in Bogeta.
Tickets are $75 per person for the lunch & learn on March 13th, $75 per person for the six-course meal on March 14th or $60 per person for the eight-course tasting on March 16th dinner seating, with proceeds benefitting Colombian youth education.
For reservations, please visit http://www.longitud315.com or call 847-926-7495.
ABOUT CHEF TONY CASTILLO 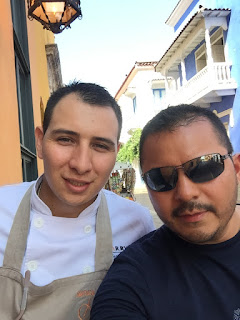 The fusion of South American flavors concept at Longitud315 was born as a result of Chef Tony Catillo's culinary upbringing in Venezuela and cooking side to side with his grandmother who traveled to various countries in South America. It was at a very young age when Castillo moved to Mexico where some of his family resided and he worked at his parent’s restaurant helping in the kitchen where he mastered the arts of butchery. Castillo followed his love of cooking and began his formal culinary career in Guanajuato, Mexico at the recognized Institute of Culinary Arts and Gastronomy where he was awarded a scholarship to continue his culinary dreams in the United States.
ABOUT LONGITUD315
The exotic South American fusion flavors of Brazil, Argentina, Ecuador, Peru and Venezuela make for a lively dining experience at Longitud315. The tasty lineup includes small plates of Empanadas, Arepas, Ceviche, Rice, Black Beans, Yuca, Plantains, and delicious Steaks and Seafood entrees accompanied with signature Chimichurri Sauces and hand-crafted breads. In 2014, Longitud315 was voted by Open Table voters “one of the TOP 100 Restaurant Neighborhood Gems in America” – a recognition received by only three restaurants in Illinois.
Longitud315 is open Monday, Wednesday and Thursday 4:30-9 p.m., Friday and Saturday 4:30-10 p.m. and Sunday 4:30-8 p.m. For reservations, please call 847-926-7495 or for more information, visit www.longitud315.com or visit them on Facebook at www.facebook.com/Longitud315. 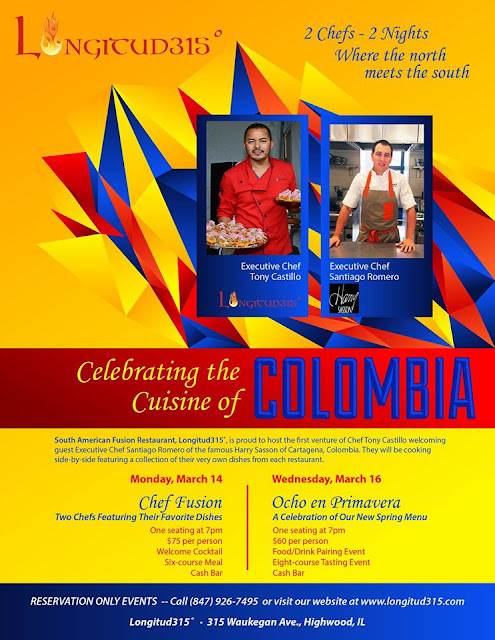