Last year was my first time attending the Good Food Festival. I learned a lot while I was there. I discovered some delicious new products. I met many people who were so passionate about food - and locally sourced food and organic food and bringing it to people who are genuinely hungry for it. Case in point: microgreens. 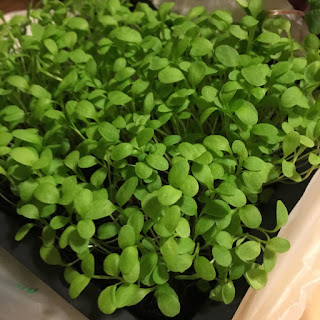 The Good Food Festival is where I fell in love with microgreens. I came across a booth for Growing Healthy People in Grayslake, which has since become Growing Healty People/Grow Well Farms. They had a table full of several varieties of microgreens and were inviting people to sample it. It was really love at first taste. I recognized the microgreens as what I had usually dismissed as just little bits of garnish that I'd seen served with salmon or chicken or side dishes in restaurants mostly in the city. I had never even heard the term microgreens before. A couple times I had heard people refer to them as clover and although kind of resemble a shamrock or four-leaf clover, it wasn't what they were at all.

I bought several packages and took them home. Unfortunately, they didn't keep long and after a few days I was craving them and on the hunt for more. And I found that I could not find them. ANYWHERE. I asked at specialty shops. I looked at farmer's markets. I inquired at Trader Joe's (I did find pea shoots - which are actually a variety of micro green -  that I adored, but after a couple months they stopped carrying them. They said they weren't selling much of them! Boo hoo!) Questioned the produce guy at the local super market. Most people had no idea what I was talking about. Each time I'd come across them in a restaurant, I'd ask about their supplier, but they either couldn't tell me or it wasn't anywhere close to me. I looked online and researched growing them myself at home, but never got around to getting started and wasn't very confident I'd be successful. My kitchen has only one window that is north-facing, so it's hard to grow anything in my kitchen. So, I've spent the past year very much looking forward to going to the Good Food Festival where I was sure I'd be able to buy microgreens again. 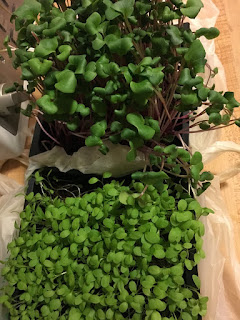 Sadly, I didn't see Growing Healthy People again, but I spotted a booth with microgreens. When I asked if I could buy some, I was told they were not for sale. I saw them again at another booth. Asked again. They were just for display. I came across a place that had palates of wheat grass. It was just for wheat grass shots.

I wasn't just sad. I was seriously devastated. I thought about circling back and offering an obscene amount of money for one of those "display only" boxes. After all, it was about 15 minutes until the end of the festival and I was sure they were probably going to toss them in the trash. One of the last couple tables I came across was Urban Canopy. And there they were...a few scattered containers of microgreens...and a sign that said 2 for $5. My foodie prayers were answered.

According to Alex Poltorak of Urban Canopy, it started "as an idea of how we create a more sustainable and equitable food system after seeing how many kids in the Chicago Public Schools don't have access to healthy produce and foods within their communities. "

Urban Canopy has evolved into a main two-acre outdoor farm within the city of Chicago in the Englewood neighborhood and also an indoor farm where microgreens and wheatgrass are grown in the Back of the Yards community near 46th & Ashland. They do offer delivery to homes and businesses in Chicago...but unfortunately I'm out in the burbs and outside of their delivery area. So, I'll have to really savor these two packs I brought home. I am going to look up some of the farmers markets that they sell at and try to plan a summer day trip around it.

I also got some microgreen seeds compliments of the U of I extension master gardeners, so I may finally give it a go at growing my own and see how it goes.

Urban Canopy also continues the educational component and has become a support system for several community and school gardens. It's crew urges others to get involved through their compost club or by joining their CSA. On the weekends you will find them at farmers markets around the city from West Pullman to Rodgers Park and areas in-between. Find more info on their website, theurbancanopy.org.