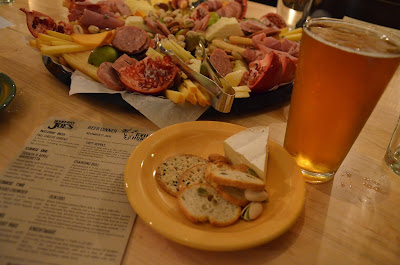 I recently spotted something in my inbox about a beer dinner that was very close to home at an eatery I really love that opened earlier this year. It's hip and casual and the food is trendy, seasonal, creative. Just a fun place for a bite to eat with a cool vibe. It's called Bohemian Joe's. I was really excited that they'd be hosting me to visit and check it out.

It turned out it was their third beer dinner so far and the brewery that brought in all the beers for pairing (Evil Horse Brewing in Crete) was also fairly new, but one I had been introduced to a couple months ago at the first annual Homewood Hop Fest. I tried so many beverages that day that I couldn't recall a specific brew, but I remembered their name and remembered that I liked what I tried, so I was anxious to see what the chef came up with to go along with their beers. And I loved that they even took it a step beyond the "pairing." The foods were specially selected to match up with the beers, but three of the four courses also used the beers in the cooking the dishes, even the dessert - and the results were absolutely divine! 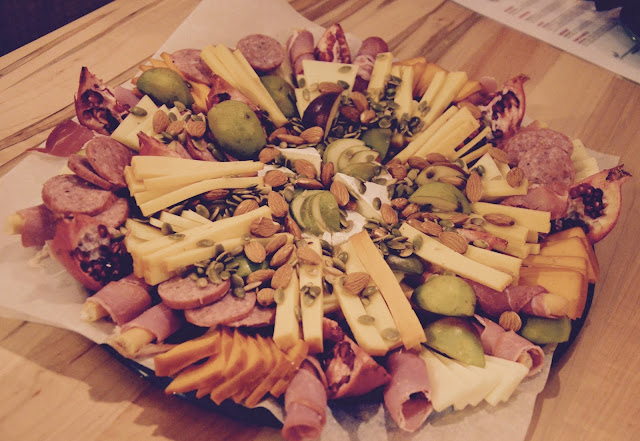 As we arrived, we had a pint of Trot Hopple India Pale Ale (6.7%ABV) with a really kick-ass fall cheese spread. I could have snacked on this platter and sipped on this ale and gone home a happy camper if it stopped right there. The mixture of gourmet cheese and fall fruits with sausage, crackers, nuts and pepitas were as satisfying as they were visually appealing. Really, I am still thinking about the smoked gouda and brie...just so good. And as Brewmaster Steve Kamp explained, even though people often relate cheese with wine, the spiciness of the IPA compliments the cheese well and in his opinion pairs better than wine.

In chatting with Kamp, we learned a little about the brewery and I can't wait to go check it out. Located in Crete, it is in a historic building that housed a bowling alley. They even repurposed part of the wooden alley when making the bar top. The brewery doesn't serve food, but you're welcome to bring in your own goodies or order food from the restaurant upstairs. Kemp's been home brewing since 1983 and was a wealth of brew-filled knowledge. We had a small group for our dinner that night and ended up seated with Kemp and enjoyed picking his brain and hearing his stories.

So, although I was nearly full from the welcome spread, I marched on into course one, which was a squash and & apple bruschetta beside a mixed olive tapenade along with Charging Bull Weizenbock (7.1% ABV), described as a strong version of an unfiltered Weissbier or Hefeweizen.

The second course was a delicious, creamy chowder of not just clams, but cod and tilapia as well, along with bacon and Gokudo Black IPA (7.6 ABV). This unique brew was on the bitter, heavy side and was a great match for the chowder.

Course #3 was made with Knightmare Scotch Ale (7.0% ABV). The tender short ribs were braised in the ale and served with a veggie kabob, pineapple slice and cauliflower puree. The ribs were delicious and the fresh pineapple was an awesome accompaniment, washed down well with the red ale, which was sweet and soft on the hoppiness. I give a definite A+ to Chef Corina on the creative pairings.

Really unable to eat or sip any more at this point, I trudged through and took one for the team and had a taste of the amazing chocolate pudding cake with chilled ganache that was made using Paxon the Ponyless English Porter (5.7% ABV). I'm always amazed and how delicious stouts and porters are with desserts. This one went so well both in the recipe and in a glass along with it.

The dinner itself was super enjoyable, the beers were all impressive and the company was great. At just $45 (only $40 if you order tickets online at least a week in advance), it is a definite bargain of a dinner - we enjoyed the cheese/meat/nut/fruit tray with a pint, four more courses with beers and then a little additional sipping at the end of our favorites of the night. If you're not a beer drinker, but just want to enjoy the food, it's only $22.50 for a designated driver ticket. If you have a big craft beer drinker on your Christmas list, tickets to one of their upcoming beer dinners would make an AWESOME gift! In January, they'll be featuring Lagunitas beers and for February, a favorite Indiana brewery of ours, 18th Street, will be there.

For tickets to the upcoming beer dinners, January 19 and February 16, you can purchase tickets in advance HERE. And pencil in the third Thursday of the month on your calendar for the rest of the year as they plan to continue them monthly. For more info on Bohemian Joe's, visit BoJoes.com. If you're not from the south burbs, don't worry - it's conveniently located just a couple blocks south of the Torrence exit off of I-80/94 (last exit in Illinois before hitting the Indiana line.) And it's totally worth a drive to enjoy one of the beer dinners - whether you're a craft beer aficionado, a foodie or both. :) If you can't attend the beer dinners, keep an eye on their Facebook page for their specials, which change weekly and get in and give them a try. 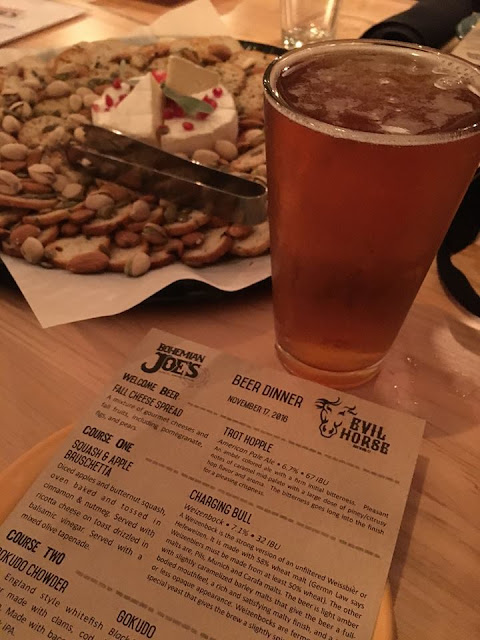