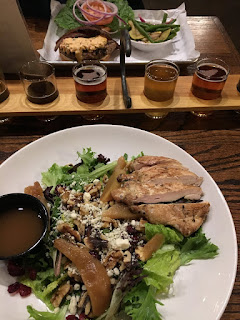 A while back I stopped with a friend at Horse Thief Hollow in Chicago's Beverly Neighborhood for lunch after we had done a school appearance to read our children's book Into the Night to a kindergarten class. As I usually do when visiting a brewery, I got a flight so that I can sample a few brews and we had a light lunch.

So, recently when hubby and I were in the city and looking for a lunch stop we ended up there and had a nice meal together complimented by some tasty beers. I like that their flight boards have six slots (most flights tend to have four or five at breweries and bars I've visited.) 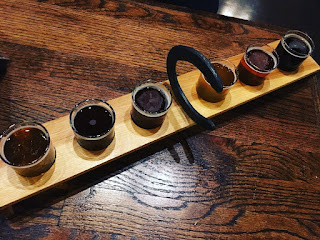 Hubby got a wild boar burger while I tried out the NorCal said with a poached pear cooked in the Coeval Deux brew along with mixed greens, cranberries, blue cheese, grilled chicken and toasted walnuts with red wine vinaigrette. It was fantastic. I was THIS close to ordering one of my favorite sandwiches - A Cuban and I didn't have a second of regret for ordering this delicious salad.

The flight board itself was pretty cool with a horseshoe as a handle - a fun touch to match the theme. 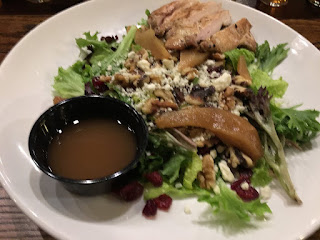 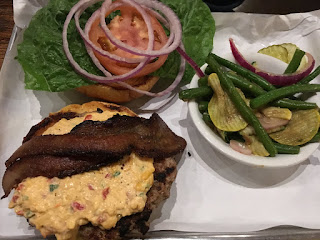