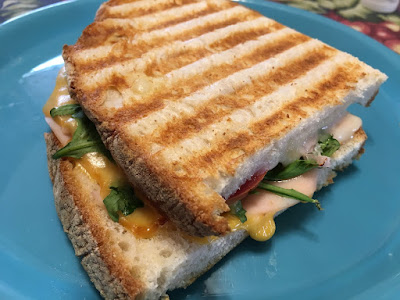 One of the best purchases I've made for my kitchen was a $20 Crofton panini maker that I picked up at Aldi. A lot of gadgets I get for the kitchen get used a couple times and then placed far into a cabinet where they almost never get used again or make it's way into a box that goes to Good Will. If it makes it more than a couple uses, that is. Stuff isn't made like it used to be and I've acquired several kitchen items/accessories in recent years that broke after just a couple uses.

I've definitely gotten my money's worth from this panini maker that I bought probably 5 years ago. Sometimes I'll got a couple months without using it, but then I'll pull it out and use it every few days for a while. I've learned that the best bread for making sandwiches in it is Turano Pane, which is also available at Aldi. 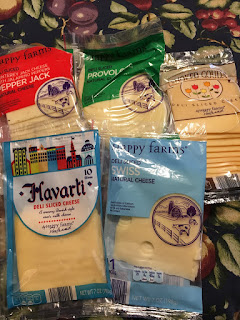 Armed with a bit of inspiration after attending Time Out Chicago's recent Grilled Cheese Meltdown, I pulled out the panini maker for a grilled cheese. As you can tell from what I've written so far in this post, I am a big fan of Aldi and I love the selection of cheeses you can get there. I grabbed a slice of Swiss and one of smoked gouda and then decided to add some meat - so a couple slices of turkey were added. Years ago I would have balked at any kind of greens or tomato on a hot sandwich - or any mayonnaise or mustard. But the more I experiment with the panini maker and the more I try grilled sandwiches or paninis as I'm out at different restaurants, the more I change my mind.

So, for this sandwich I added some tomato slices, arugula and spicy mustard. Some sliced fruit went on the side and a glass of lemon water and it was one of the best lunches I've had at home in a while. 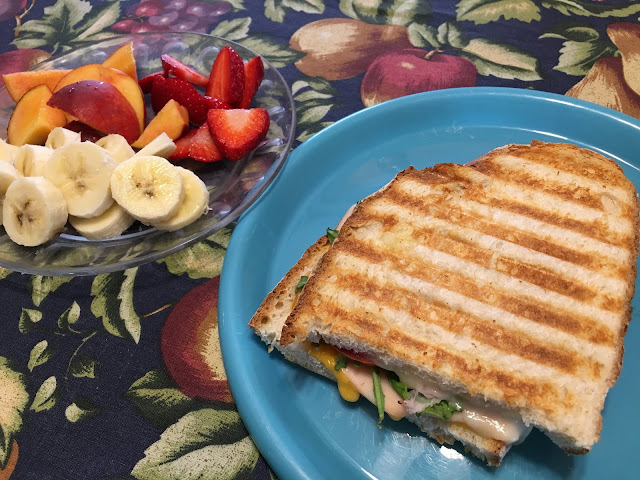