Looking for some lively foodie fun this weekend? Consider paying a visit to the Little Bucharest Bistro at 3661 N. Elston for a feast of roasted pig and lamb, grape stomping, gypsy music and more with a buffet of goodies for $25. Take a look at the full press release for more on this inaugural fall harvest event. 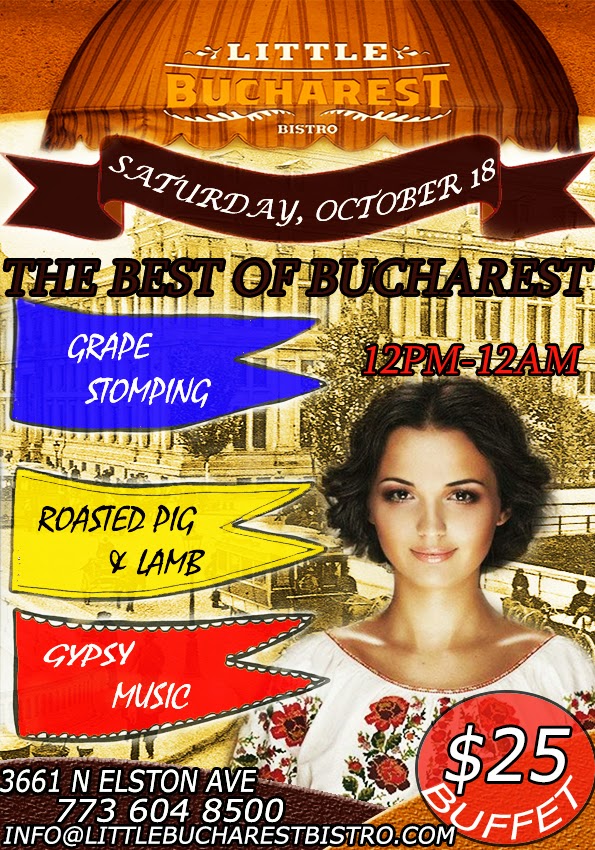 CHICAGO (September 2014) - Little Bucharest Bistro, the popular eastern European restaurant located at 3661 N. Elston Ave in Chicago, will host its first celebration of “The Best of Bucharest” on Saturday, October 18 at 12:00 p.m. noon until 12:00 a.m. midnight.  The joyous and delicious festivities, featuring the best that the Region has to offer, will include:
·       Grape Stomping;
·       Complimentary Grape Juice;
·       Pig and Lamb Roasts;
·       Gypsy Minstrels  and Dancers;
·       Special Buffet of Bountiful Delicacies at $25 per person;
(Reservations are suggested; limit one ticket per person; dine-in only; not valid on with any other offer; beverages not included; gratuity not included).

“Join us as we showcase the BEST of the BEST in Romanian food, drink, entertainment as well as cultural traditions that you will NEVER see outside of Romania,” says Little Bucharest Bistro’s gregarious owner Branko, the host with the most!
At 9 p.m., get ready for Branko to, literally, break plates to ward off any demons in the room!
Little Bucharest Bistro’s “The Best of Bucharest” $25 Buffet features:
o   Appetizers: “Vinete,” Eggplant Spread with cucumber, red onions, tomato, feta and grilled pita; “Roasted Beet Carpaccio,” greens, clementine, goat cheese and caramelized nuts in vinaigrette; and “Mititei” Charbroiled Sausages, beef and pork, garlic, served with greens and crispy polenta.

Originally located at 3001 N. Ashland since 1970, a fixture there for more than three decades, Little Bucharest Bistro moved to Chicago’s Old Irving Park area in 2009. Known for its Eastern European food, Little Bucharest translates to “Little Paris of the East.” The restaurant blends a touch of Romanian heritage with American contemporary fare in a vibrant and modern atmosphere.  A picturesque outdoor patio also is available. For more information, visit www.littlebucarestbistro.com or follow on Facebook , Twitter or LinkedIn.