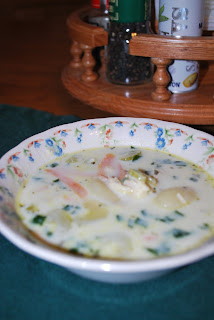 A couple weeks ago Dad and I went to the Olive Garden to celebrate his 77th birthday! It's one of his favorite places to eat and he always orders soup and salad. I love their soups, as well. Pasta Fagioli is what I had been ordering for years. While I love the zuppa tuscana, I find he sausage just a wee bit too spicy for me, so I don't get it very often. In the last few years, they also added chicken gnocchi soup to their menu and that's where I was first introduced to it. 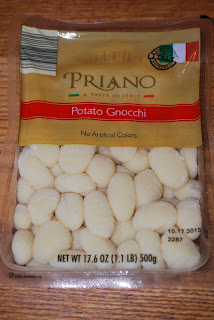 I recently had come across a version of it on copykat.com and pinned it. I was skeptical that it would taste as good as Olive Garden's, but was willing to give it a try. This week when I was in Aldi, I came across these potato gnocchi and grabbed a pack so that I could whip up a pot of it. I really like this Priano brand from Aldi and I was sure it would work well in the soup.

So, tonight it was freezing outside. After running one of the boys to one of his activities, I returned home and decided it was soup time even thought we'd just finished eating dinner. I pulled up the recipe from Copykat.com. I didn't follow it exactly because 1) I usually change it up just a little - sometimes just to put my own spin on it or to cut back on some of the unhealthy ingredients, 2) because I always seem to be missing some of the ingredients that the recipe calls for and 3) because sometimes I don't read through the directions all the way through beforehand! Ooops! :)

So, this batch was pretty close to what I'd found, but not exactly. And I can't imagine how good it would have been if I had followed it to a "t" because it was already incredible just as it was. 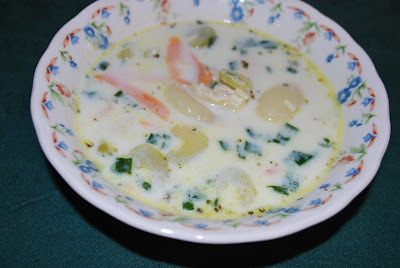 Ingredients:
1 tablespoon extra virgin oil
4 tablespoons butter
4 tablespoons flour
4 cups milk (half and half is even better)
3 ribs celery, sliced
2 tsp. minced dried onion (only because I didn't have fresh stuff)
2 tsp minced garlic (I buy it in the jar at Aldi)
4 chicken bullion cubes
4 cups water
1 cup of carrots, finely chopped
2 cooked chicken breasts, cut or diced in small pieces (I boiled mine in broth the day before in anticipation of using it for some soup)
1 package gnocchi  (As mentioned above, I got the Priano brand from Aldi.) Although the copykat.com recipe says to pre-cook, I don't.
1 cup of fresh spinach, coarsely chopped
1/2 teaspoon garlic salt
1/2 teaspoon freshly ground pepper
1/2 teaspoon dried parsley
1 teaspoon Tastefully Simple Spinach and Herb Dip Mix
1/2 teaspoon basil
(Also, the copykat.com recipe calls for 1/4 tsp. of nutmeg, which from other recipes and reviews I've read, this is like a secret ingredients that really MAKES the soup. I totally thought I had nutmeg in my spice cabinet. Then when I reached for it, NOPE! It was allspice. Oh, well. So, I left it out. Next time I'll make sure I have it on hand.) 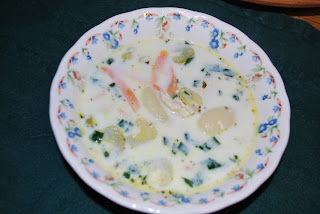 Saute the celery in butter and olive oil and add garlic and dried onion. Cook until celery is soft. Add flour to make a roux.

After it has thickened a bit, add water and bouilion cubes and bring to a boil. Add milk and carrots. Return to a boil and add gnocchi and chicken. Boil for about 4 minutes and add spinach and seasonings. Simmer about 5 more minutes and it's ready to go. 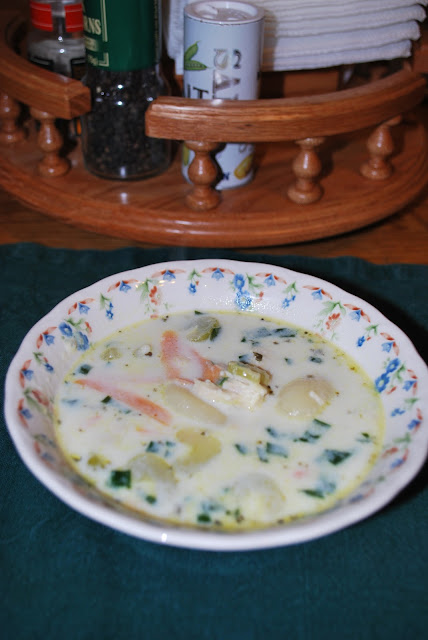