If there's ever been a gal that loves carbs, that would be me. When I was a little girl and was under the notion that people who went to jail only got bread and water, I remember thinking "That's not so bad. Bread is fantastic!" LOL

I'm not that big on sugary stuff, but I literally could live on bread and potatoes and water - at least for a little while. There are so many awesome varieties of bread out there.

A few years ago, when I was pregnant with my third child, I was told I was had borderline gestational diabetes. I was to follow a diabetic diet for the remaining months of the pregnancy. That meant nothing to drink except water (and my OB recommended one glass of milk a day) - no artificial sweeteners, no soda, no lemonade, no juice, etc. And I had to cut out sweets. No cookies or ice cream or cake (you know, the kind of stuff pregnant women are often drawn to with a side of pickles!) And when I had bread, it was supposed to be whole grain and I was ALWAYS supposed to eat it with a protein, not alone.

So, for breakfast I sometimes had a hard time figuring out what to eat. I was never a breakfast eater. One slice of plain toast or a little cup of cereal would suit me fine under normal circumstances. Now, I had to figure out what to do with the toast or English muffin I'd normally eat. Luckily, pre-cooked bacon was an easy fix (although you're also supposed to really limit fats, too, so I'd stick to one or two slices). I'd also sometimes smear some peanut butter on a piece of toast or a frozen toaster waffle. Even for those who don't have to follow such a diet, your body needs some protein in the morning to get you moving and boost your energy.

Anyway, my point in giving you all that background is that I kind of got in the habit of adding things to my carbs and not eating them alone. After all, diabetes runs in my dad's family. No one in the family seems to develop it until an old age, but my grandmother had it, my aunt, my uncle, and my dad (who is now 77) was recently was diagnosed. So, with that family history, I'd been told that even after my pregnancies (I have 5 kids and had the same borderline-diabetes issue with the last 3) I should try to continue a lifestyle of following a diabetic diet because eventually I'll probably be there myself.

I'm still not a big breakfast person, but one of my resolutions this year was to eat breakfast at least half of the week. So, I've been trying to throw together something light before it hits lunchtime and often that base is a carb of some sort. This morning, I started with an everything bagel. And rather than just eat it with some butter or cream cheese, I thought about what I could add to it. Because I love the combination of cream cheese and cucumber, I decided to slice a few to put on top. And I learned as a teenager when I worked at a Boz Hot Dog stand that celery salt goes great on cucumbers, so some of that went on as well. I still needed a protein, so I sprinkled a little bit of crumbled bacon on there, too. And I ended up with a yummy breakfast with a non-traditional (for breakfast) refreshing flavor. 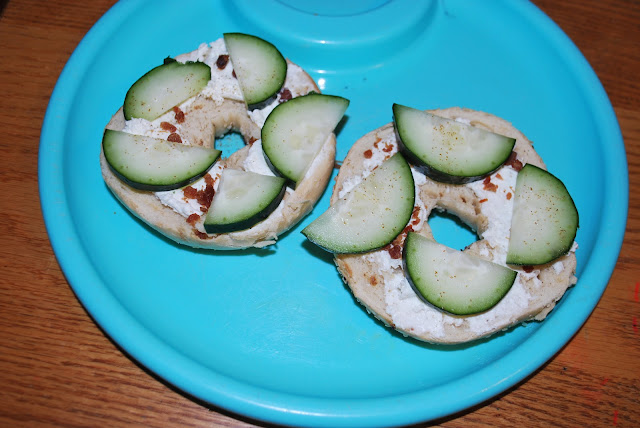 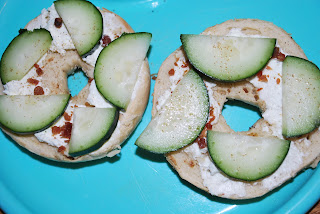 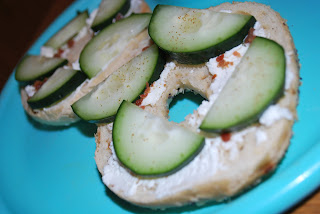 Easy and delish! Give it a try. So many other toppings would work, as well. Use some bell peppers or tomatoes or broccoli (think veggie pizza -- anything you'd put on one of those would be great here.) You could also add cheese or put on a little more meat - some bacon slices or ham or Canadian bacon. And if you don't like cream cheese, maybe a little pesto or stone ground mustard.