The Hofbruahaus Chicago in Rosemont opened last week following a lively press preview that included countless musicians and a ceremonial beer tapping. Both Chicago Foodie Sisters were able to attend the event and I was happy to have that opportunity as I've been following the progress of the place for some time.

Last week I posted a little bit about the event﻿ and the beer. This time I'm filling you in on the food. It started off with a Bavarian Appetizer Plate that included an assortment of German gourmet cold cuts, including Black Forest Ham and Landjager sausages with a Bavarian Cheese Specialty called Obazda. Everything was quite tasty, and there was another appetizer to try - a Freshly Baked Bavarian pretzel imported from Munich. I was reading about how they come over here on a slow boat with generators set to keep them at a specific temperature, so getting them from Germany to Rosemont is no small feat. When I looked at a regular menu and saw that the pretzel was $13.95, I was momentarily surprised, but to know the background of all that goes into them and to have tasted them along with a classic stone ground mustard and a sweet mustard, it is absolutely worth every penny. It is also huge and plenty for an appetizer for two or more. Oh, and by the way, if you think you don't like radishes, you have to try these. Those thin white slices are a mild radish that I'd never had before and they were very refreshing - added a nice crunch to go along with the meats and that delectable bleu cheese. 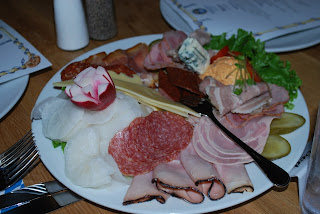 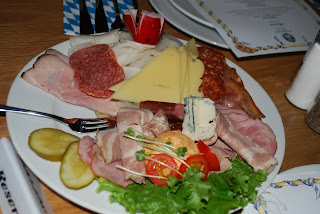 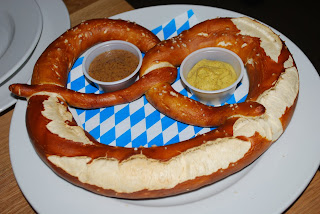 Next up was a family style main course platter, which allowed us to sample three entrees and a variety of sides. We tried Hofbrauhaus Hahnchen, which is a grilled chicken breast with creamy mushroom sauce (it was delish!), Schweinbraten, which is a pork roast with vegetable garnish and dark beer sauce (one of my favorite German dishes) and chicken bratwurst and Nurnberger Rostbratsurstl (loved the latter!). On the side were mashed potatoes and sauerkraut and potato and bread dumplings. 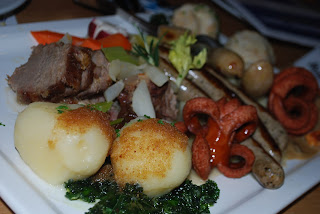 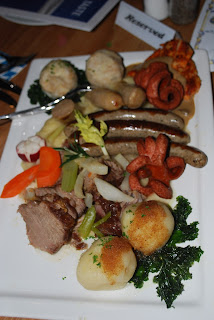 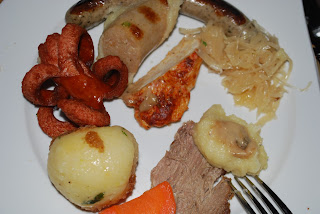 I was a wee bit bummed that my favorite German dishes - potato pancakes, spatzle and Weiner Schnitzel weren't part of the fare, but that just gives me an excuse to get back there soon.

Among the other menu items are salads, sausages, burgers, fish and steaks.﻿

We were thoroughly entertained throughout the evening with everything from German drinking songs to Neil Diamond to Johnny Cash to John Denver. There was even a beer tapping ceremony with a long parade of musicians. 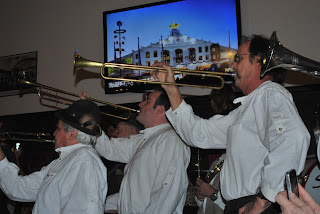 And standing on your chairs was not at all discouraged. 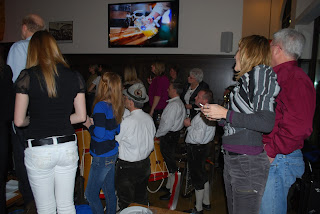 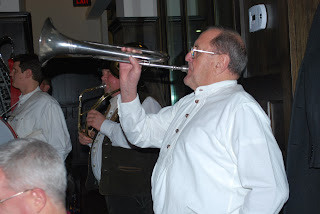 Dessert was magnificent. Like I had to try everything on the platter magnificent. Each bite was better than the last - strudel, back forest cake, cheesecake. Yum! Do not leave without having dessert! 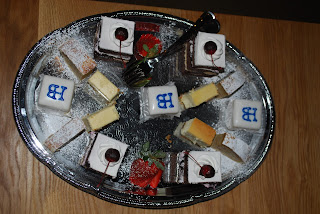 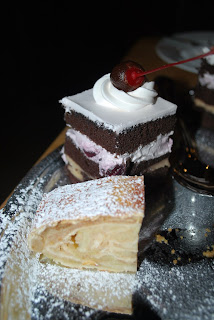 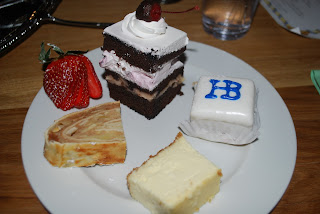 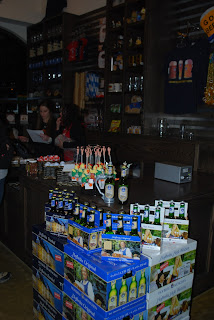 If you're a fan of German food and atmosphere, you will love spending time at the Hofbrauhuas with lively entertainment, authentic platters and lots of beer flowing. And if you haven't experienced German cuisine or culture, there's not a better place for an introduction. 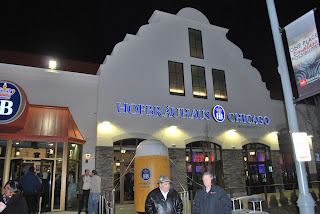