The Chicago Foodie Sister on the right is Becky. Becky is a big Harry Potter fan. Um...let me rephrase that. Becky is a gigantic, humongous fanatic of anything and everything to do with Harry Potter. She's way more than a fan. She has read every book numerous times. She's seen every movie numerous times. She could probably recite them word for word. She was one of the first in line when those movies were released for the midnight showing. She has all kinds of little collectible items related to the movie. She's been to probably any Harry Potter-related convention there's been and she's traveled all over the country to attend them. She's gone to different events to meet members of the cast and even gone to other non-related Potter events and shows with members of the cast - like going to New York to see Daniel Radcliffe in How To Succeed in Business Without Really Trying. Then she went back to see it again starring Darren Criss (who is on Glee, but also did a Potter-related play in his pre-Glee days.)

So, knowing what a Potter fan she is, it makes it easy to buy things for her. But, because she has so much Potter stuff, it's hard to know what Potter items she has and what she doesn't have. So, my problem was solved this season when I found a Facebook page among all the food blogs I follow called Kristi's Kreations - Not Your Grandmother's Aprons. "Ah-ha!" I thought. I'll get Becky an apron. That's because in our Facebook profile picture, for a long time we had a photo of the two of us in aprons holding a plate of homemade crepes, but we were wearing borrowed aprons that said "Jason" and "Kathy" on them. As I looked around on her Facebook page, she had a variety of aprons for all kinds of different interests. Football teams. John Deere. Camouflage. Baseball. Leopard print. And I saw a note on her page one day saying that she was willing to take special requests. So, "Harry Potter" popped into my head.

I e-mailed and asked if it would be possible to make a Harry Potter-themed apron. She was willing and eager and got to work looking for fabric. It turned out to be quite a chore for her to track some down as it hasn't been made in years and she had to scour eBay, often finding just small scraps. I told her that even if she could find some small pieces to incorporate into the apron, I'd be happy with that. Finally, she sent an e-mail and said she'd found some fabric. She went way above and beyond in fulfilling my request! Within a few days, she was done and the apron was on it's way. I was so excited and couldn't wait to give it to my sister. It was a one of a kind Harry Potter that I knew she didn't have.

This year Becky hosted Christmas at her house and she was thrilled to open it and see her "Hogwarts Apron." She said it was her favorite Christmas gift! Mission accomplished! 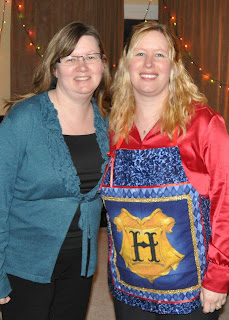