For many months I've been looking forward to the opening of Hofbrauhaus Chicago. It was a photo of the construction site on a friend's Facebook page where I first learned that Chicago would soon have its own Hofbrauhaus. I've eagerly been checking the website often for any hint of opening and finally, the day is here...well, almost. 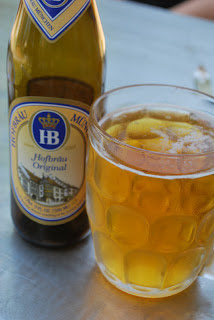 The new location will mirror that of the historic Haufbrauhaus in Munich. We live in a relatively young country and the thought of anything in our country that exceeds 400 years is pretty much unthinkable. But, the beer itself has been around that long. In a country where an establishment is doing good to last 4 decades, Chicago will now have a beer hall serving a brew that has been enjoyed for four centuries. I'm not a big beer drinker myself, but Hofbrau is a favorite -- up in my top 3.
So, how did a girl who's family has been in the U.S. for a LONG time and whose roots come from England, Scotland, Ireland and Native American Indian reservations end up with an affection for the German beer? Stewy. What's a "Stewy?" you are wondering. That's a nickname for my father-in-law. His real full name is Juergen Paul Franz Steinweg. Born and raised in Berlin and surrounding area, he immigrated here on his own in his late teens. ﻿I first met him in the late 1980's when my husband and I first started dating. Hofbrau was his beer of choice and that's how I became introduced.
As I said, he immigrated at a young age and all alone. I had the opportunity to meet his mom, who didn't speak a word of English when she came to the U.S. to be at our wedding. His sister and nephew have visited on several occasions. The visits involve lots of beer and rowdy laughter and it makes me wish I'd had a chance to visit his homeland and sit in one of those peppy, jovial beer halls that he surely sat in many a time. I'll get there one day.
So, Stewy and his son (who I have now been married to  for 21 years) were the ones who introduced me to Weiner Schnitzel and leiderhosen and sauerbraten and many other German specialties...and to Hofbrau. There was a German restaurant in suburban Elmhust that closed many years ago called the Heidelberg. Twenty years ago Hofbrau was hard to find. When we went to that restaurant and the deli upstairs that was full of imported products, we'd come home with one, two, sometimes four cases of Hofbrau that would have to be savored until the next visit. It's now widely available. Not all liquor stores carry it, but a few in the area do. And not a lot of restaurants have it, but if you hit places like Chef Klaus' Beirstube or Uberstein or Edelweiss, you're sure to find plenty. Now Hofbrauhaus will have it flowing as well.
Sadly, Stewy isn't doing so well. And I so hoped to be able to take him there when Hofbrauhaus opened. He was recently hospitalized after complications from the chemotherapy and radiation treatments he'd had in November and December. He's now in home hospice care, so the possibility of him making that trip is pretty slim. You can bet that when I do get there to check it out, I'll be ordering a tall glass and toasting to the guy who taught me all there is to love about Germany and its culture and people and its food....and its beer.
A soft opening takes place January 21 at 9 p.m. and according to their website, hofbrauhauschicago.com, it looks like they open for regular business hours at 11 a.m. the next morning.