Yes, I know. Salsa is traditionally associated with Mexican cuisine and features tomatoes, peppers and cilantro. The salsa I make more often has a little bit of Italian flair from the use of olive oil and garlic salt. It's kind of a cross between bruchetta topping and salsa, I guess. Oh, and I like to skip the hot peppers and add cucumber. That's mostly because we usually have a lot of cucumbers from my father-in-law's garden around the time that the tomatoes are ripening. That doesn't really apply in the winter, but I've just gotten in the habit and if I have a cucumber, it gets added in. And in my opinion it makes it that much more refreshing.

Here's a rundown on this batch:

Combine all ingredients in bowl and stir. 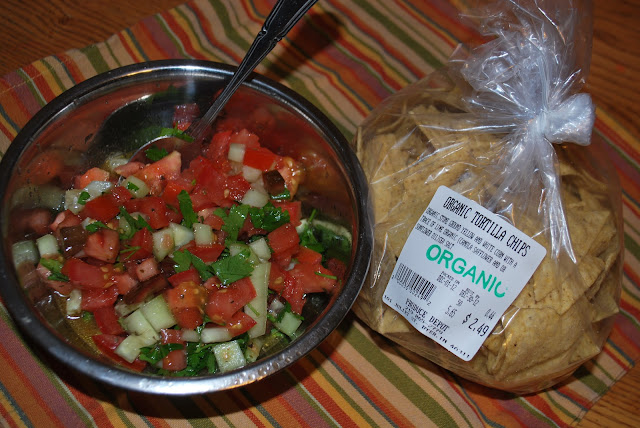 I served it up with these awesome organic tortilla chips I picked up at Produce Depot in Dyer.

This blog post is included on the Walking on Sunshine bloghop. Check it out: http://www.walkingonsunshinerecipes.com/2013/01/foodie-friends-friday-linky-party-26.html.