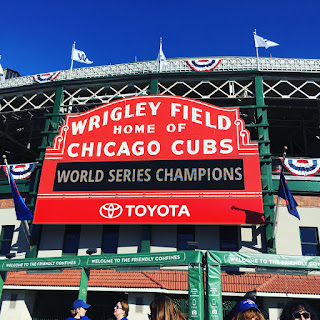 So, you may not have heard, but we have another World Champion in the Windy City!!! Oh, I cannot tell you how ecstatic I am over this win. It took 108 years, but the Cubs can finally call themselves World Champs. I am a huge die-hard Cubs fan and have been my entire life so this was such a sweet victory. Part of what made it so sweet was that I didn't have to be one of the ones who said "I wish ______ was here to see this." I'm a Cubs fan because my dad is a Cubs fan. He's been a Cubs fan since 1945. And he is now 80. And for the past several years he has been saying, "All I want is to see the Cubs win the World Series before I die." I was so happy that he was here to see it and that we were able to enjoy it together. We watched several of the postseason games together and shared in the excitement - the very guarded excitement as there have been so many times we've been let down before. But, finally, this was the year! 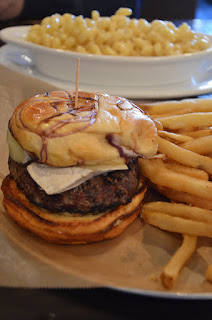 I also was lucky to be able to share the postseason with my oldest son who is now 22. He is as big of a Cubs fan as my dad. I love to listen to the two of them talk and talk about players and their stats and plays that happened in various games. They know so much about the game and so much about the team. Most of my trips to the Friendly Confines over the years have been with one or both of them.

My husband happens to not be a sports guy. He never watches sports. He's only been to one Cubs game with me in the 29 years we've been together - and that was the year that my oldest son won a contest from Walgreen's to be a celebrity bat kid and meet the players and go out on the field before the game.

The Cubs gave us 4 tickets for that game and my sister, who is a season ticket holder, also gave us two tickets for that game - the last game of the season in 2009. So, it was me, my dad, my oldest son, his two younger brothers and my husband.  Even though he is not at all interested in baseball, he was a trooper this season. During many of the postseason games he cooked dinner on the grill and chauffeured the kids so that I didn't have to miss the game. He held down the fort while I went to restaurants or sports bars with dad to take in a game. And he even watched game 7 - like really watched and payed attention and commented on the plays and cheered for the Cubs and was genuinely happy to see them doing good. I never thought I'd see the day that would happen. 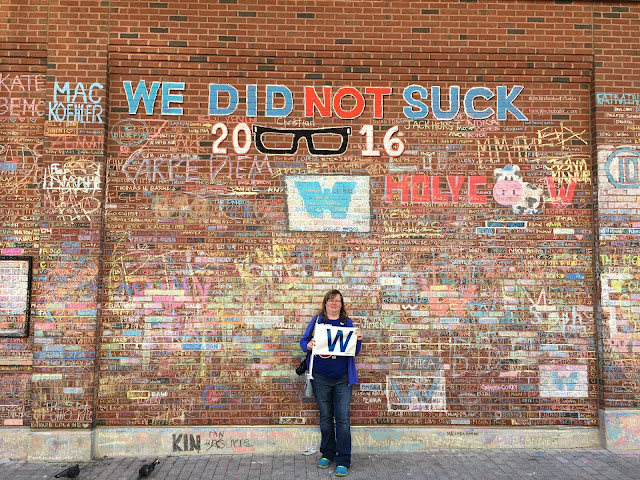 A couple days after the big win, I agonized over the decision of whether or not to go downtown for the big rally. All the news broadcasts made it sound really scary - that millions were expected and there wouldn't be space on the trains and they would have to pass by until there was space in a car to pick up more passengers. I decided to pass on going - and still kind of regret it. 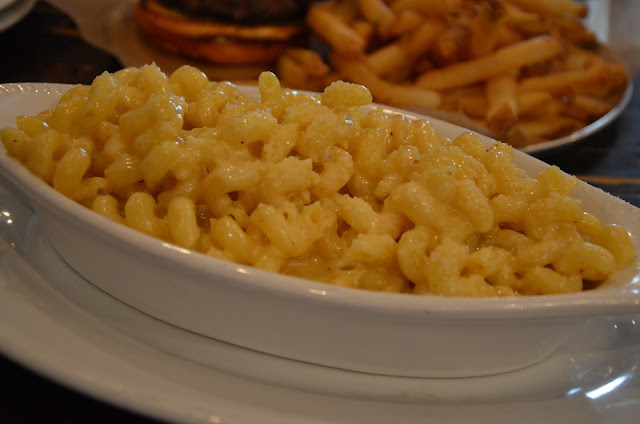 The next day my husband suggested taking a day to go downtown and take in the city in the wake of the big win. So, downtown we went to Wrigleyville to get a pic under the iconic marquee with the world "World Series Champions" on it and to see the chalk messages that had covered the outfield walls and to see the Eamus Catuli sign turned back to zeroes and to see W flags flying all over the neighborhood and on the under-the-construction hotel/plaza beside the ballpark and to stop by Harry's statue and tearfully whisper "They did it!" 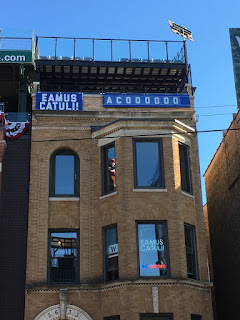 It was time for lunch after we walked around Wrigley Field and I suggested Rockit Burger Bar to my husband. I'd first tried it a few years ago on the suggestion of a firefighter at the Wrigleyville firehouse. I knew they had good burgers and served beer, so hubby readily agreed.

We split a Rockit Burger with wagyu beef, melted brie, fried shallots, medjool date aioli and a red onion brioche bun served with truffle fries. We also split a mac and cheese starter. We still had leftovers that went home with us.

It was a fun day together and a good meal together and another memory that I'll hold with me of this outstanding, unbelievable season. Even if they bring home another championship in the coming years - and with this bunch it's very likely - there will never be a year like this one. The year the curse ended and happiness spread over Wrigleyville and Chicago and the state and the country and beyond. What a year! 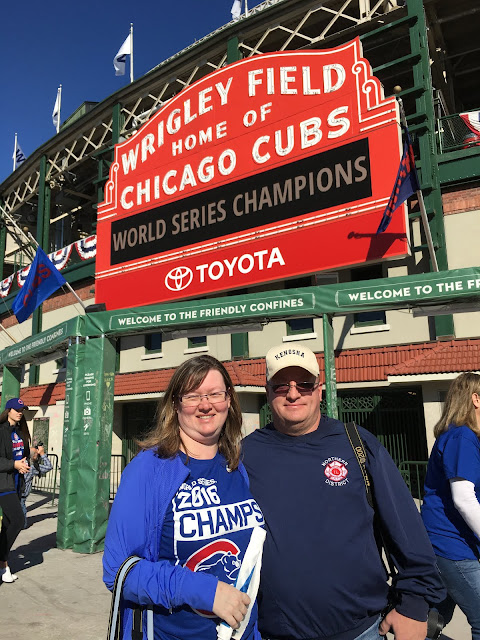 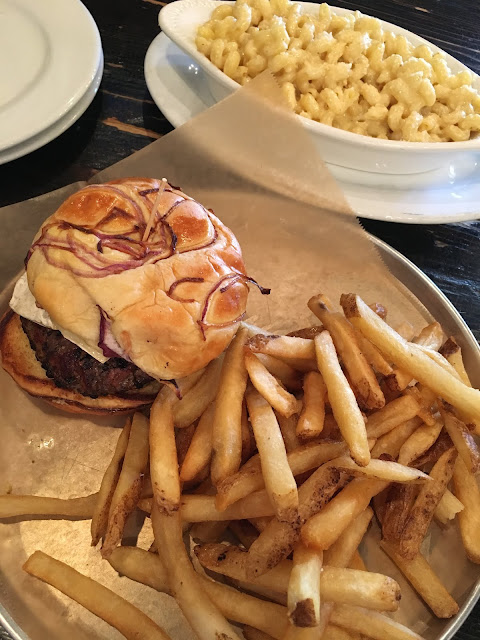 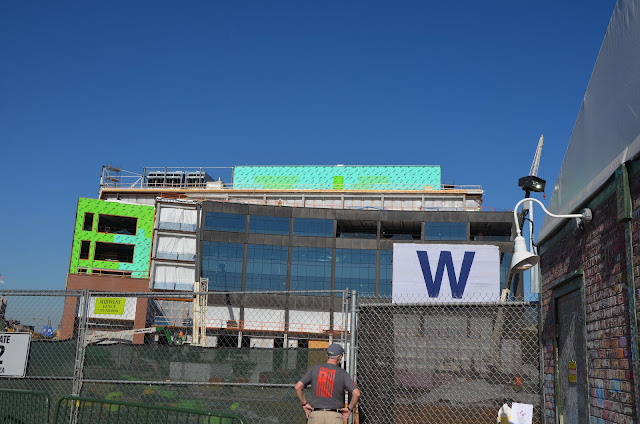 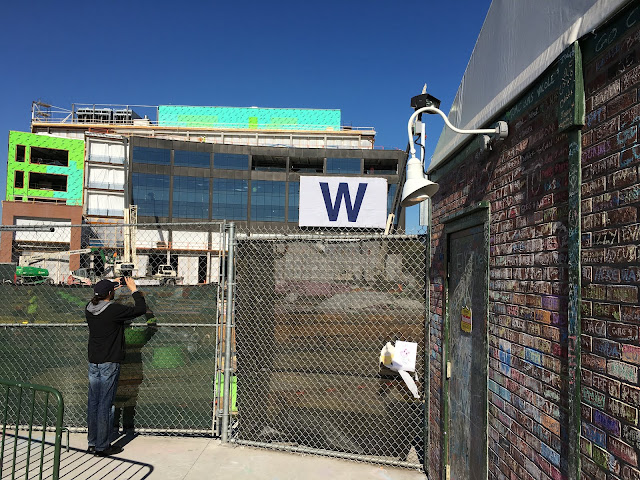 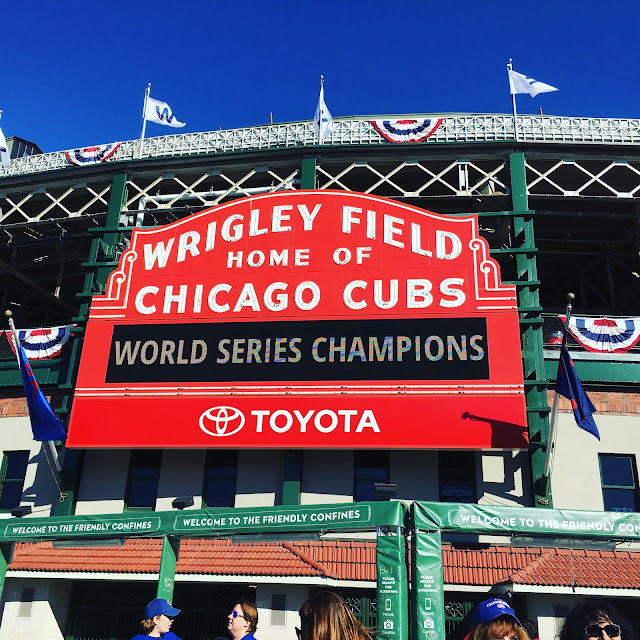