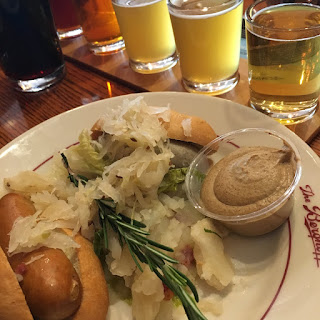 My favorite ethnic cuisine is German. I grew up never knowing what German cuisine was like. When I met my future father-in-law at age 14, I had no clue what schnitzel was or even bratwurst. I knew about sauerkraut, which I was always afraid to even try because of the potent aroma.

But once I met my future husband and got to know his family, I was introduced to German cuisine. His father was an immigrant born and raised in Berlin who came here in is late teens. His mom would occasionally make sauerkraut and knockwurst or weiner schnitzel and I'd go along to the Heidelberg in Elmhurst where there was a deli and a restaurant in the basement where I'd enjoy sauerbraten and kassler rippchen with red cabbage or sauerkraut. I'd have potato pancakes with applesauce and sour cream. And for dessert I'd always enjoy Black Forest Cake. 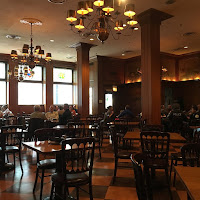 I became hooked on German food. After dinner, we'd walk through the deli and buy goodies to take home - German rye bread and chocolates and marzipan and strudel and imported beer like Hofbrau which was very hard to come by in the late 1980's and early 1990's. So, it's a bit sentimental for me as it is linked to my husband's heritage, but also it really tastes good! There aren't too many German restaurants around in the south burbs where I live. If I want a German meal I have to go out to Frankfort to Chef Klaus' Beirstube or up north to a handful of authentic German eateries or to the Hofbrauhaus in Rosemont. We once had a nice German place here in town that later moved to the next community over, Lynwood. It didn't last very long before closing and the building has since been demolished. So, I get to enjoy German food so infrequently that it's always a real treat.

Earlier this year, hubby and I did an overnight at the J.W. Marriott, which is just down the street from the Berghoff, so we had to take the opportunity to dine there since we were so close. Hubby got a combo platter that had a bratwurst and knockwurst with German potato salad and kraut. I got my usual - weiner schnitzel with red cabbage and fried potatoes. There was also a side of green beans. 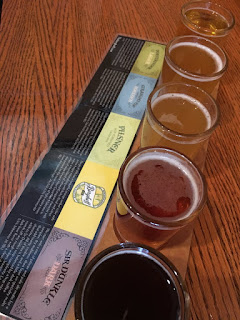 I always like to order flights to try out a variety of different flavors, so we got a flight to share. My favorite is the Berghoff Pilsner.

The restaurant itself has a cool history, dating back to 1898. At the time it was a mens-only saloon where sandwich were served free with your beer purchase. It later evolved into a full-service restaurant and when prohibition was repealed in 1933, the Berghoff got Chicago's liquor license #1. 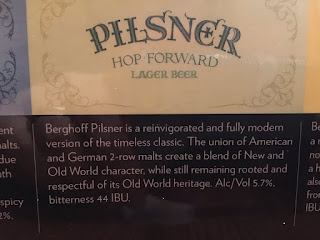