Last week, my 9-year-old son and I were at a local restaurant. We saw the village's former fire chief (my husband's former boss) who asked my son if he was going to be a firefighter like his dad. Out of our five boys, this one is the only one who isn't intent on going into a dangerous career (my oldest is currently a firefighter, the next one wants to be a police officer and the other two want to be military men.) He told the former chief that he didn't want to be a firefighter, he wanted to be a chef. Every time the commercials come on television for the Le Cordon Bleu Cooking Institute, he says that's what he wants to do. And he tells me that he wants to have his own restaurant and that I can come eat there for free every day. :) He's only 9, so only time will tell, but I love his interest in food and cooking.

Anyway, our friend, Paul was sitting at the table with us at the restaurant and heard my son talking about wanting to be a chef. Paul, who is Hispanic, told him that his daughter makes chilaquiles at home and that it's an easy dish that kids can make. After that, my son Brandon, kept asking me to make them with him. I kept telling him I had to get to the store for some ingredients, but that we'd make them soon.

Finally, after a couple days of him hounding me, I finally got everything we needed and we made them as Paul directed.

Add olive oil to hot skillet and add tortillas to pan, toss until they crisp and move to a plate covered with paper towel. You can also go an extra step to make them crispier and lay them on a cookie sheet at put them in a 350 degree oven for about 5 minutes. I used my biggest skillet and had to do three batches.

Return tortillas to skillet with salsa. I also added some jalapeno for my husband after I scooped some out for myself. My taste buds are wimpy and I can't handle jalapenos. Paul's instruction included adding the egg right on top at this point. However, I'm not a big fan of runny eggs, so I cooked the eggs separately to fry them.

Lay out your tortilla and salsa mix on the plate, top with egg. At this point I also added some chicken that I had cooked in the crock pot with salsa since I was serving it as a dinner meal and knew the men at the table would be wondering where the meat was. I glanced at other recipes online and found some that add ground beef or pork.

Add your tomatoes, onions, cilantro and cheese to top of plate. I understand this is a common breakfast meal in Hispanic cultures, but I could certainly see it becoming a regular item on our dinner menu.

This made enough to serve 6. 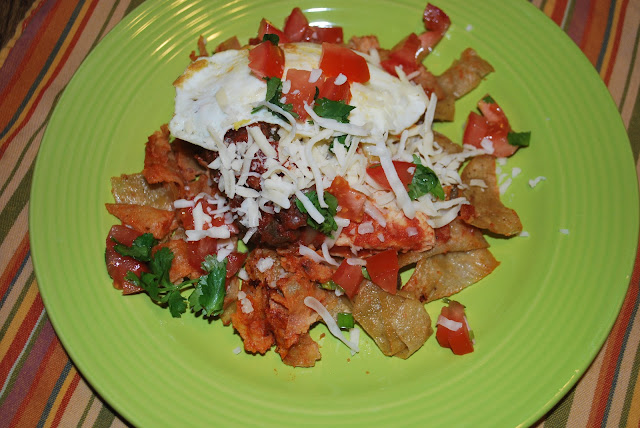