On my first visit to Trader Joe's, I grabbed several bags of frozen vegetable mixes and so far I've really liked the ones we've tried. The other night, I made Trader Joe's Organic Superfood Pilaf to go with dinner, which was a tri-color quinoa blend with sweet potatoes, kale and carrots. 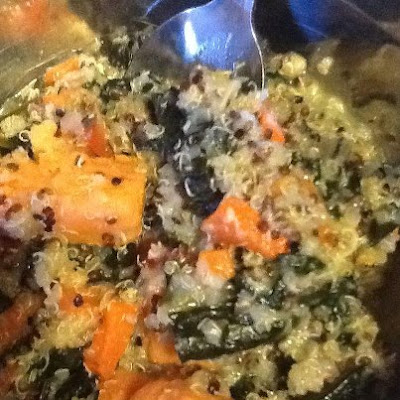 Hubby said right away that he wasn't a fan, but he has been known to break out in hives when offered something that's healthy. It's not often he complains about food that's put in front of him. I remember when I was on a Brussels sprouts kick and had made them several times in a short period, he grumbled a little about having them again. I told him, "They're good for you, embrace them." That's become my line when he isn't uber eager to eat something on the healthy side. One time he looked at something healthy I'd put in front of him and before I could even open my mouth, he said, "I know, it's healthy for me. Embrace it."

I, on the other hand, liked it. I do like quinoa and kale and carrots and I thought I didn't like sweet potatoes, but I liked them in this blend. I'd definitely buy it again - as for the rest of the family, they'll just have to embrace it.