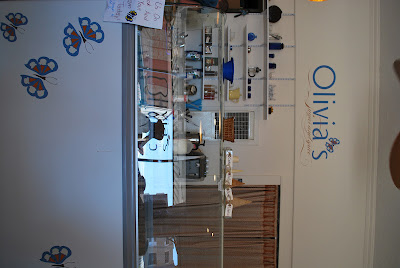 On Father's Day we were up in Three Oaks, Michigan for their annual Flag Day Parade. We've fallen in love with the little town, which has a lovely two-block long area filled with art galleries, unique shops and trendy little cafes along with a movie theatre that features independent and foreign films and a theatre featuring live performances. Last year a brewery opened up and a distillery opened up recently. Three Oaks has become a calming little sanctuary for us in the middle of sprawling farmland that is busy in the summer with the spillover tourists that flock to New Buffalo and surrounding lakeside towns.

With much of the business coming during the busy summer months, there's often a high turnover with some of the businesses, which thrive from Memorial to Labor Day and then struggle for the months in between. You've got some who have been there for the long haul, like Drier's Meats, a charming old-school butcher shop that's been around since the 1870's. It can be dissapointing to fall in love with a place and then find that it's gone come your next visit. But sometimes it's nice to be introduced to a place that's different than what was there before.

One place we often stopped when in town was a little ice cream parlor. I think it was called Scoop's. Inside was an old-fashioned soda fountain, which I had been told had been relocated from the pharmacy across the street. When we made our first visit to the area this season, we found that the place was no more, but had re-opened as an ice cream parlor called Olivia's Sugar and Spice. We popped in before the parade for a scoop of ice cream. Unfortunately that old soda fountain is gone, but the cute country blue background with the butterfly and flower accents is adorable. 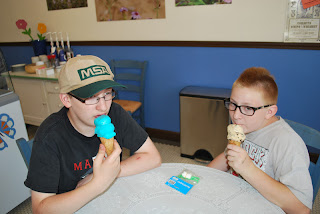 The kids all loved their selections. Don't recall what everyone had, but I know there were some scoops of Blue Moon in there. And I got some kind of really chocolaty concoction. After mine was already in hand, I saw that there was Red Velvet ice cream!!!!!!!!!!!!!!! Can you imagine??????!!!!!!!!!????????? No worries, though. Just means I'll have to return another day to see what the red velvet tastes like!